About 3 million Americans — mostly older adults — have glaucoma, a degenerative eye condition that can cause blindness. If caught early enough and treated, blindness from glaucoma can be prevented. However, half the people with glaucoma don’t know they have it until it’s too late, highlighting the need for regular eye exams. Thanks to ViSION (Vision Screening in Our Neighborhoods), a volunteer Johns Hopkins University School of Medicine student group, Baltimore residents with poor vision or eye disease can get free screenings and follow-up care, regardless of their ability to pay.

“We’re a group of enthusiastic and motivated medical students who are looking to serve our community and reduce health care disparities,” says fourth-year medical student Heba Mahjoub. “If we see a problem, we act on it. Whether or not they have health insurance, we can help them.”

“It was great, because they [ViSION] came to us,” says Monica Weil, Monument East’s community life service coordinator. “That’s key, because a lot of my residents don’t have transportation. Coming to them makes everything so much easier.”

The program, originally called the Student Sight Savers Program, was founded by Thomas Johnson III, M.D., Ph.D., when he was a medical student at the Johns Hopkins University School of Medicine in 2011.

“Johns Hopkins is a major part of Baltimore City,” says Johnson, now assistant professor of ophthalmology at the Wilmer Eye Institute at Johns Hopkins. “We have a responsibility to contribute to the society in which we live and work. It’s critically important for us to look around and realize that there are people in need all around us, just blocks away from the hospital.”

Johnson says several eye diseases, such as glaucoma, can be detected at early stages. But if disease is not caught early, damage to a person’s vision can occur very slowly over time. Without routine eye exams, many people can end up with moderate or severe glaucoma, which can leave a person blind.

In addition to glaucoma screening, Johnson says ViSION screens for diabetic retinopathy, a common complication of diabetes caused by damaged blood vessels in the back of the eye that can also lead to blindness if not caught early enough.

There is an ophthalmologist on-site at every ViSION clinic, says Johnson. They are available to oversee the process and to consult with the medical students about the results of the screenings. Each ViSION student volunteer is assigned to one of the stations.

To be screened as part of ViSION, a patient must first register on-site at the event and provide information about their general health and family history. Then, a student at another station measures the patient’s ability to discern shapes and details with an eye chart. Additional stations measure eye pressure and visual field, as well as examine the patient’s retinas and optic nerves. Patients receive a summary of the screenings from a medical student before leaving, and an ophthalmology appointment is scheduled for patients who need follow-up care.

“It’s wonderful for the patients, but it’s also great for the medical students because they get in-depth exposure to ophthalmology,” Johnson says. “Only 50% of our volunteers go into ophthalmology, but what they learn will serve them as primary care doctors. They’ll better understand how eye health affects their patients. Students enjoy the opportunity to interact with real patients and get a sense of how to communicate complex medical information.”

Mahjoub, who plans to pursue ophthalmology, says the skills she has learned have been invaluable.

“Many people want to do right by their health, but are in certain situations where it’s hard to get to appointments,” says Mahjoub, who is also co-director of the group. “To be able to be there for people when they’re in these difficult stages is what it’s all about. We help them to help themselves.”

Mahjoub has worked at most of the stations, but said her favorite is checking eye pressure because the consequences of glaucoma are readily apparent. Mahjoub asked Johnson to take a look at one patient who had increased pressure. The patient started to panic and was worried she was going blind, Mahjoub says.

Mahjoub and Johnson talked with her about treatment options and how to prevent progression of the disease.

“We let her know she was in the right place and doing the right thing, and that we were by her side,” Mahjoub says.

Medical student and ViSION co-director Christina Ambrosino says one of the features that makes ViSION unique among many screening programs is the optical coherence tomography station, which creates a picture of the retina using lasers that allows the screeners to see the retina’s layers in cross-section.

“It gives you a sense of whether there’s retinopathy present,” Ambrosino says. “You can also get an accurate measurement of the optic nerve’s cup-to-disk ratio, which can be relevant to glaucoma.”

“With one sheet of paper, patients can check off what resources they need,” Ambrosino says. “Afterward, we’ll follow up with them and help connect them to other services, like insurance, transportation or food resources.”

Ambrosino says she’s happy to be helping to make one aspect of medicine more accessible.

“We’re working to reduce barriers to health care,” she says. “Programs like ViSION also help Johns Hopkins build rapport and trust in the community. I think we’re taking a step in the right direction.” 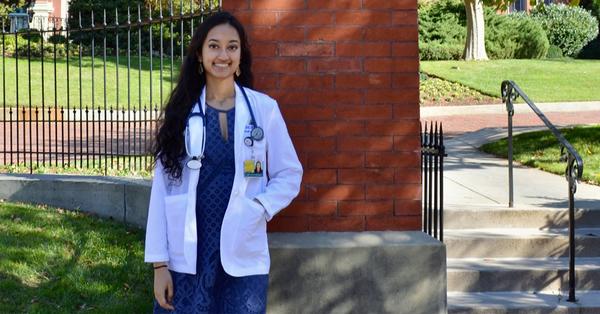 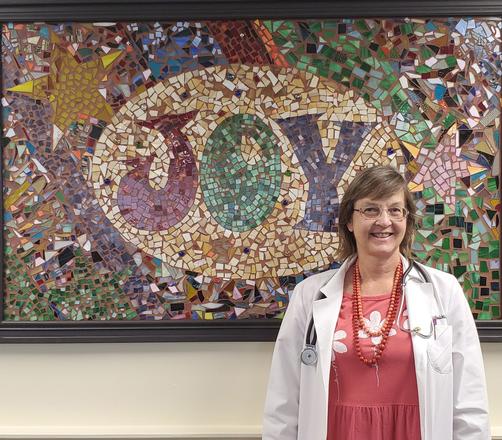 More than 1 in 4 high school students in the United States use e-cigarettes. Johns Hopkins Lung Health Ambassadors program aims to change that.
back to top button