Radiation oncology is unique in that it is the only specialty that makes its own medicine. Radiation treatments delivered by machines essentially come in one of two forms: photons or protons. Although every radiation oncology expert recognizes that photon therapy and proton therapy are different, no one has studied them at the level proposed by our experts.

“We will be able to leverage our extraordinary talent in order to advance the field,” says Akila Viswanathan.

“This will give never-before-seen insights into the actual biologic effects of proton,” she says.

Photons are a higher energy version of the same X-rays used for diagnostic imaging. These high-energy X-rays can be pointed at a part of the body where a cancer is located and, through a series of interactions inside of the body, they break the DNA inside the cancer cell, rendering it unable to repair or copy itself. As a result, the cancer cell dies.

Proton therapy is called heavy ion therapy. It essentially kills cancer in the same way—breaking the DNA—but it uses charged particles directly rather than X-rays to kill cancer. Many experts believe that protons do a better job o of breaking the DNA than photons, and this is an area Marikki Laiho is eager to explore.

“Protons damage DNA directly, and that type of damage is harder for cells to repair,” says Laiho, whose research focuses on understanding the benefit of combining radiation therapy with drugs that further cripple cells’ ability to repair DNA damage. “If we combine proton therapy with drugs that inhibit DNA repair pathways, the interaction will likely be greater than what we see with photons.”

One key difference between X-ray or photon radiation therapy and proton therapy is already known. It goes to the very core of why proton therapy is beneficial. It’s not that it kills cancer better; it’s that it damages normal cells less. Photons pass through the cancer and out the other side, so on this exit, they hit normal cells and tissue. Proton therapy, on the other hand, stops at the tumor. There is no exit dose.

“Conventional photon radiation therapy and proton therapy cure tumors at the same rate,” explains Viswanathan. “The side effects they can cause are similar, but with proton, less dose goes to normal cells, and that’s the benefit.” 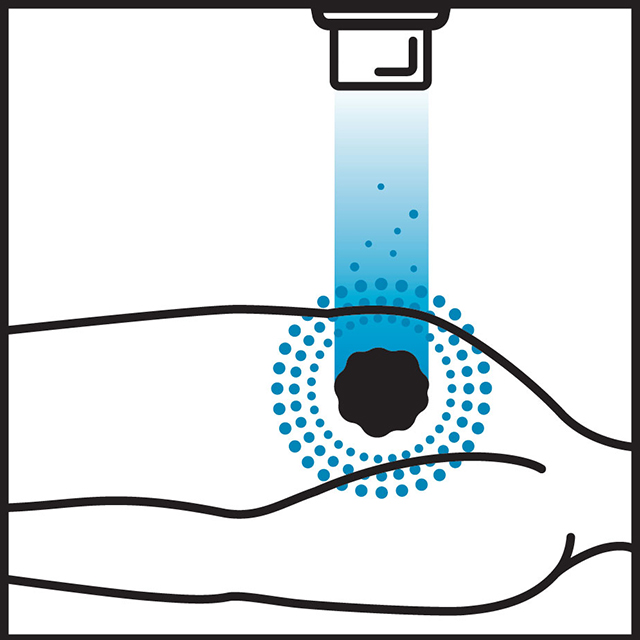 What Viswanathan describes is technically known as the Bragg peak. As protons travel through the body, most of the energy is reserved and released where the protons stop—in the tumor. Photons release energy along the entire path they travel. This fundamental difference is what makes proton therapy preferential for certain tumors. If vital organs or structures are along the path the radiation travels, protons cause less damage to them.

It can reduce excess radiation to normal cells and vital structures and organs by about 1.5 to three times, Viswanathan says. But, at two times the cost of photon radiation, clinical data to prove proton’s benefit over photon radiation is essential to moving the technology forward. 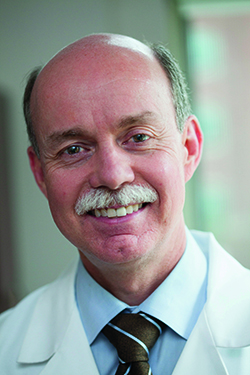 Theodore DeWeese says photons and protons both have their place in radiation therapy, and that’s why advanced knowledge of the field is so important. One area, he says, where the benefit has clearly been demonstrated is pediatric patients and tumors in the brain and spine and when the cancer is located close to vital organs, like the heart. Head and neck cancers, tumors located at the base of skull where nerves come out, breast cancers near the heart, lung cancers in the middle of chest or near the esophagus, certain pancreas and abdominal tumors—essentially any cancer located in or around complicated anatomy that needs to be shielded from radiation may be better suited for proton therapy. When combined with lumpectomy, proton therapy could potentially improve breast-conserving treatments. However, all of these benefits must be proven definitively through clinical trials, DeWeese says, adding that these studies may show cancers that can be treated just as effectively with less expensive therapies, but they will also reveal when proton is the preferable choice.

Prostate cancer is a cancer where many questions remain. Proton therapy has been used frequently to treat the cancer. National trials are ongoing, but currently all available evidence shows that both types of radiation therapy have equal benefit.

“The fundamental issue with proton for prostate is do we have a clinically meaningful benefit that justifies its increased cost?” asks Curtiland Deville. Generally, he says, photon and proton therapy provide comparable results for prostate cancer, but photon therapy is a less expensive treatment.

“I am a prostate expert,” says DeWeese. “I’m not sure it’s a substantial advantage for this cancer. But that’s OK. These kinds of studies have to be done to determine when other forms of radiation therapy will work just as well at a lower cost.”

Deville would like to study proton therapy in younger men diagnosed with prostate cancer, particularly those who have a recurrence after surgery. Young patients are at greatest risk of developing radiation-induced secondary cancers later in life, and proton therapy could prevent these toxicities. Other functional characteristics could also indicate prostate cancer patients who may develop fewer quality of life-impacting side effects with proton therapy. Patients who have received radiation and could benefit from additional treatment, or re-radiation, is another circumstance where the precision of proton offers an advantage in various types of cancer. There may be patients who, in the past, would have been excluded from radiation therapy that could be beneficial against their cancers because of toxicities, says Deville.

The lack of comparative studies between photon and proton therapy was a primary reason DeWeese and Viswanathan set up the Kimmel Cancer Center’s proton therapy center to have an unparalleled emphasis on research. 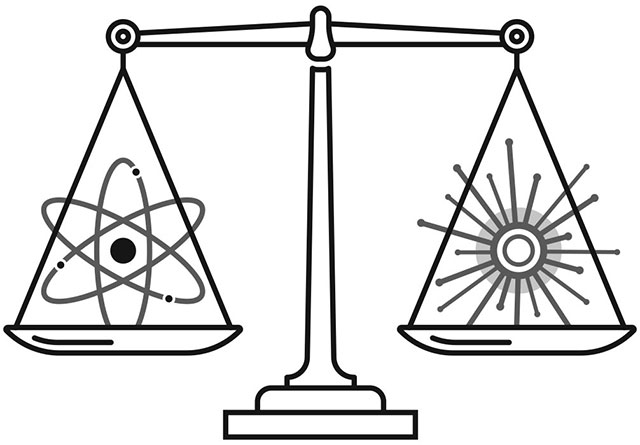 One important area of research focus will be relative biological effectiveness, or RBE, how much more effective is proton therapy compared to photon radiation therapy. They want to know what doses of each type of radiation therapy are required to produce the same clinical affect. Just as important, they need to confirm that the prescribed dose is actually being delivered and going where they expect it to go. 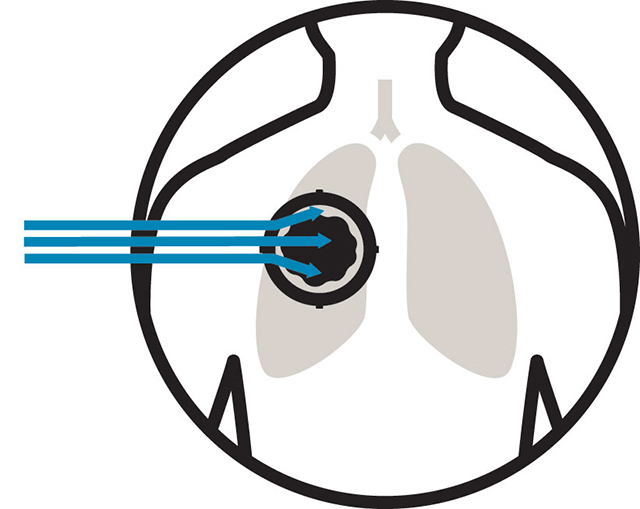 Linear energy transfer, or LET, is the density at which the energy is deposited along the path to the tumor and in the tumor. Protons travel more directly en route to the tumor, depositing little energy or lower LET. The protons slow inside the tumor, and that is where the highest density of cancer cell-killing energy is transferred or deposited, explains physicist Todd McNutt, who is part of the expert team that makes the complex calculations that maximize damage to cancer and minimize risk to healthy organs and tissue. The region where the energy is the highest is right at the edge of the tumor, he says. This is why expertise is so critical. “If you don’t get it right, the highest LET may hit outside the tumor, and if there is a narrow boundary between the tumor and a critical organ or structure, the patient may be harmed.”

Deville is among Kimmel Cancer Center experts who are eager to collaborate with McNutt and use his Oncospace data-mining system to track and compare toxicities with photon and proton therapy to develop a precision medicine approach. He says it could help identify prostate cancer patients who would benefit from proton therapy.

“This is the right direction for an academic proton therapy center like ours. High level evidence has been lacking. Kimmel Cancer Center experts can bring their expertise into the research realm, and 10 years from now, we’ll have these answers to set the standards of care,” says Deville. 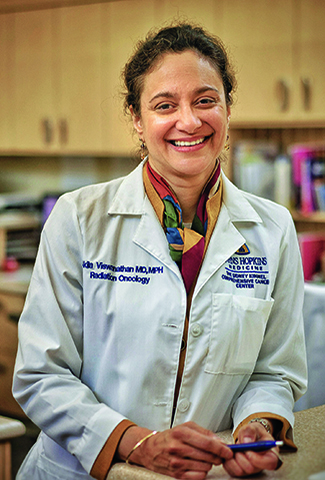