As the mid-afternoon August sun pounds the playground behind an elementary school in Northeast Baltimore, a giant blue truck rolls to a stop on the parched grass. The Johns Hopkins mobile vaccine team snaps into action, unloading plastic tubs full of paperwork, establishing a secure internet connection and setting up canopies to shade visitors from the glare and the 95-degree heat.

The health care on the spot truck, or “the Spot Van,” as it’s known, is ready for a few hours of vaccinating people who live near the school. The tidy neighborhood of Belair-Edison, tucked between Clifton Park and Herring Run Park, features block after block of sturdy brick townhomes and tree-lined residential streets.

One northeast Baltimore woman has walked two blocks from her home to get vaccinated. The 60-something retiree says she has been extra careful since the beginning of the pandemic, avoiding large indoor gatherings and wearing a mask nearly everywhere. But she hasn’t been ready to get vaccinated until now.

“I didn’t rush right out right away and get it. I tried to learn as much as I could,” she says as she waits for her first dose of the Pfizer-manufactured vaccine. “It looks like this is the only way to stop [the pandemic]. With so many people getting sick again, it feels like it’s time to just get the thing already.”

She looks forward to easier and more frequent visits with her grandchildren and great-grandchildren.

“That’s who I’m really concerned about,” she says.

When her turn arrives, she climbs aboard the Spot Van, greeted by full-blast air conditioning. A Johns Hopkins nurse welcomes the woman and offers her a seat. After a few brief questions, the nurse prepares a dose of the vaccine that will help protect the woman against COVID-19.

After swabbing the woman’s upper left arm with an antiseptic wipe, the nurse pokes a small needle into the spot she just cleaned, delivering a first dose of the vaccine into the woman’s bicep before covering the tiny spot with a bandage. In the hours and days to come, her newly vaccinated immune system will learn to detect and fight the coronavirus that causes COVID-19. She’ll need one more dose in a few weeks and possibly a booster next year.

“That’s it! See you again soon,” the nurse says.

“Didn’t feel a thing,” the woman exclaims, as she tugs her sleeve down over the bandage.

COVID-19 Mobile Vaccine Team Director Ben Bigelow, a Johns Hopkins medical student who is also a paramedic, has been dedicated to getting shots into arms since the vaccine’s authorization for emergency use by the Food and Drug Administration in late 2020. Before that, he served on the Johns Hopkins “Go Team” that helped quell dangerous outbreaks at Baltimore-area nursing homes, homeless shelters and inpatient substance use disorder treatment centers.

Bigelow manages the Johns Hopkins collaboration with the Baltimore City Health Department to vaccinate almost 20,000 Baltimoreans by June 2022. The state-funded effort is ahead of schedule; between May and August of 2021, Bigelow’s team administered more than 13,000 shots.

“But for the most part, we’ve focused on Baltimore City, particularly on locations with historically poor access to medical care,” says Bigelow. “We meet people where they are.”

Bigelow’s professional experience in emergency response has taught him to keep an eye on his teammates, making sure they manage their stress and their workload. From time to time, he says, they’ve encountered people hostile to the vaccine.

“There’s been a lot of misinformation going around,” he says. “That’s made our job a little tougher.”

The mobile vaccine team is trained not only to administer the vaccine, but also to combat myriad myths and misperceptions about the shot. Disinformation campaigns and changing messages have slowed the rate of vaccination across the United States, which has experienced a sharp uptick in serious cases of COVID-19 since the initial waves of vaccinations in the early months of 2021.

Before the first people in Belair-Edison arrive for their shots, Bigelow gathers the team for a quick huddle. Shading his eyes from the blazing sun, Bigelow reminds them to work in groups and establishes code words in case anyone needs help.

As the impromptu meeting breaks up, Bigelow remembers to add one important reminder. “Stay hydrated.”

The mobile vaccination clinic has offered a welcome opportunity for Johns Hopkins nurse Lauren Rosales to help prevent the illness she’s seen ravage so many patients while she was working on COVID-19 inpatient units at The Johns Hopkins Hospital.

“Obviously, it’s really important to provide inpatient care,” she says. “But it was stressful seeing people still getting so sick. For my own mental health, I started working vaccination clinics back in February, kind of as a side thing. It felt like something I could do to help get us out of this bad place.”

Rosales now spends most of her days working on the mobile clinic, both administering vaccinations and trying to dispel fears.

“Everyone is different,” she says. “Before I ask people what they’re afraid of, I listen to them. I try to hear their fears or their hesitation about the vaccine. I don’t want them to feel pressure or rushed. I want to give them the feeling that they can ask questions all day, and I’m happy to answer them.”

Plain-clothed security officer Meeco Blassingame is never far away from his teammates. In addition to making sure the team is safe, he plays reggae music that thumps out of a wireless speaker. During his time with the mobile vaccination team, Blassingame has learned to talk with people who are hesitant about the shot.

After a person waiting for a shot has an obvious bout of anxiety, Blassingame encourages her to express her fears about the vaccine’s side effects.

“I get it. It’s OK. Don’t stress about it,” he tells the woman calmly. “It’s your choice. You don’t have to do anything you don’t want.”

As they talk quietly, he reveals that he was also worried about the vaccine.

“A lot of my family got vaccinated right away, but I waited. I wasn’t ready at first,” Blassingame tells her. “I prayed on it. Then one day, I came to work and they had one shot left and somebody offered it to me. I got it, and it wasn’t bad. I’m glad I did it.”

What does he tell others who are worried about getting vaccinated?

“I tell them the truth,” he says, adding that many of the hesitant people he’s encountered have been misinformed by messages on social media. “The shots work, and the side effects really aren’t bad.

“But see, nobody wants to be pressured or feel like somebody thinks they’re dumb. All I do is give them some space and let them make their own decisions.”

Members of the Johns Hopkins mobile vaccine team have also become adept at thinking on their feet.

Mary Carole Fortunato calls her work on the mobile vaccine team “the coolest thing I’ve ever done at Johns Hopkins,” where she has worked as a nurse since 1985.

As soon as the vaccine became available to Johns Hopkins health care staff, Fortunato signed up for hers. Then, she volunteered to help administer vaccinations to thousands of her fellow employees. When the clinic on the concourse of Turner Auditorium ended last May, Bigelow asked Fortunato if she wanted to join his team.

“I thought it sounded great,” she says. “I was on board immediately.”

Like Rosales, Fortunato says she doesn’t badger community residents who hesitate to get vaccinated. Instead, she uses many of the skills she’s gained in her years of nursing.

“I ask if they want to talk about it,” she says. “Some of them just walk away. But a lot of them do want to talk.”

While most places the mobile clinic visits are welcoming, Fortunato says the team has encountered a handful of confrontational situations.

“That’s just something we have to deal with,” she says. “We’re not arguing with people. If someone doesn’t want the vaccine, we just move on to people who do.”

Fortunato won’t estimate how many vaccines she’s administered this year.

“It’s been a whole lot,” she says. “And every one of them is important. That’s nursing: We do what we have to do.”

The days are long and stressful, and the summer has been brutally hot, says Fortunato. “As dirty and as sweaty as I get, it’s still the most humbling experience to bring these vaccines to the neighborhoods that need them.

“With so many people getting sick again, it feels like it’s time to just get the thing already.”

On Street Corners and in Churches, Johns Hopkins Dispenses COVID-19 Vaccines Where They Are Needed Most

Vaccine equity teams at Johns Hopkins Medicine are concentrating their efforts on people who are hardest hit by the COVID-19 pandemic. 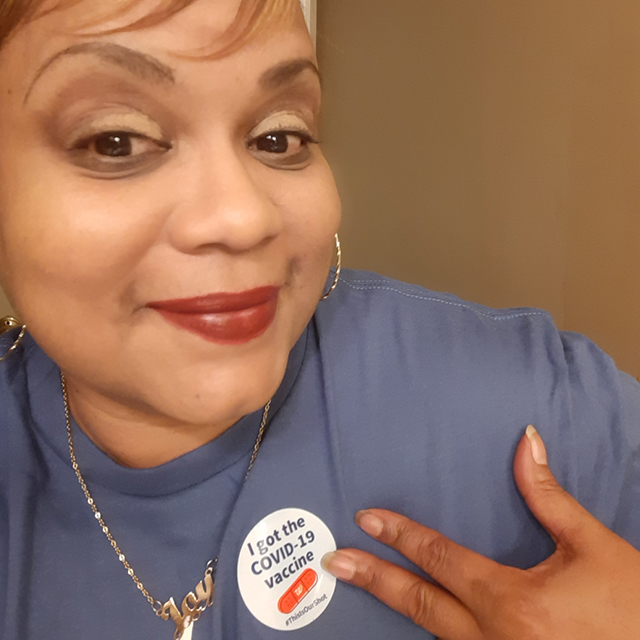 Surviving COVID-19 Inspires a Vaccine Doubter to ‘Get the Shot’

Joy Curbean-Johnson hesitated for months before getting vaccinated despite a dangerous bout with the infection. Now she’s encouraging other Johns Hopkins employees to get vaccinated.
back to top button