Brianna Atkins and her parents, Angel and Santos, went home to California after only one night in the hospital after surgery.

Life was busy for 17-year-old Brianna Atkins. In January 2015, the Apple Valley, California, high school senior was ready to start her final season of soccer, focused on maintaining her spot in the top 10 of her class and working part time. But it all came to a sudden halt when she learned the headaches that she’d been having during the past month were caused by a brain aneurysm.

Instead of taking the field at the season’s first soccer game, Brianna was in the emergency room at the local hospital with her parents, Angel and Santos Adams. The headache pain was so bad that Brianna couldn’t play.

“I was on my way to her game when she called me crying,” recalls Angel. “She’s not one to complain about anything. We knew something wasn’t normal.”

A CT scan showed a mass on Brianna’s brain. After further testing by her primary care physician and a referral to a local neurologist, they learned the mass was a giant brain aneurysm, a weak and ballooning area in an artery wall.

Brianna’s aneurysm was in the part of her brain that supplies blood to areas that control functions like heart rate, eating, balance and speech. The aneurysm’s size and location meant it was only a matter of time before it ruptured, something Brianna likely wouldn’t survive.

With this diagnosis, Brianna’s life came to an abrupt stop — no school, no soccer, complete bed rest — to reduce the risk of rupture.

“She lived in a makeshift bubble,” says Angel. “Her dad and I spent the next two weeks on the couch with her, taking turns watching her sleep.”

Within days, she and her parents had an appointment with a neurosurgeon close to her home. The doctor told them there was nothing she could do — common treatments for aneurysms weren’t an option. The aneurysm’s location made microsurgical clipping, a procedure that blocks blood flow to the aneurysm, too risky. Another option, endovascular coiling, uses platinum coils inside the aneurysm to clot the blood and block blood flow to the aneurysm. Unfortunately, the opening to Brianna’s aneurysm was so large that the coils would fall out.

However, the neurosurgeon recommended that the family contact the Aneurysm Center at the Johns Hopkins Department of Neurosurgery.

Hoping for an Option

After reviewing Brianna’s medical records, the surgical team believed her only chance was a minimally invasive procedure using an innovative combination of endovascular coiling and flow diversion with an embolization device. The coils would provide immediate blood clotting and block blood flow to the aneurysm. The embolization device, a stent (tube) placed in the blood vessel, would close off the opening and solve the problem of the coils falling out. Over time, cells would grow over the stent, sealing off the opening for good.

But using an embolization device in this particular location had only been done a handful of times, and there was concern about trying the technique on an aneurysm as large as Brianna’s.

The surgeons were honest with Brianna and her parents about the surgery’s risks. With the aneurysm located deep in the part of the brain that controls the body’s most basic functions, the margin for error was none.

We promised her we'd get her the best care we could, no matter what or where we had to go to get it.

One thing the family could count on was the experience of the team at the Johns Hopkins Aneurysm Center. The team treats an average of 350 aneurysms each year and has performed over 600 embolization flow diversions.

Three days after talking with the Johns Hopkins neurosurgeons, Brianna and her parents were on a flight to Baltimore.

“We promised her we’d get her the best care we could, no matter what or where we had to go to get it,” says Angel. ”We were excited for what was to come, knowing Brianna had a fighting chance, thanks to Johns Hopkins.”

Brianna spent the next week in the hospital, undergoing tests and taking medication to prepare her for surgery. She admits she was scared but says the staff and environment at The Johns Hopkins Hospital helped.

“The nurses were super patient and kind,” she says. “Everyone was amazing from the moment we got there.”

Angel says the surgeons helped ease their fears too. “They were real with us and talked to us so we understood. Their confidence really made us feel comfortable,” says Angel.

Brianna, right, and her sister Aubrey

Although the procedure involved complex manipulations the team didn’t expect, the surgery was a success. When Brianna left the hospital the next day, there were only two signs that she’d had brain surgery: the tiny incision needed to reach the aneurysm and a headache. Two weeks later, she was back in school, and that spring, she graduated with honors.

And today as a busy college student, she’s following doctors’ orders and living a normal life.

With prom, graduation and college ahead, Brianna Atkins had lots to smile about. 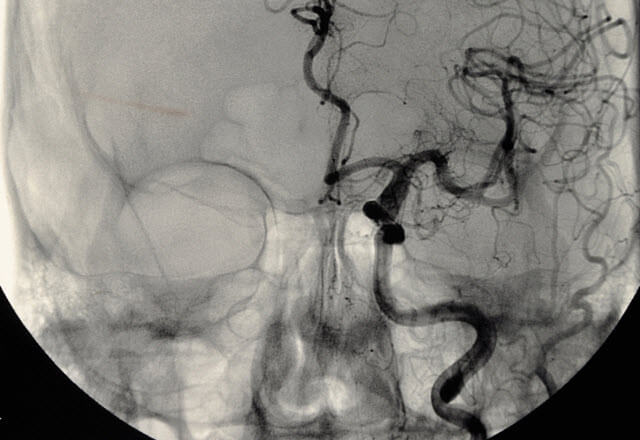 A brain aneurysm occurs when a weakness in the wall of a blood vessel in the brain balloons and fills with blood. An aneurysm can take years to grow and may never cause any symptoms or issues unless it ruptures. A ruptured aneurysm requires emergency medical care.

Dr. Rafael Tamargo, director of the Aneurysm Center at The Johns Hopkins Hospital

The Johns Hopkins Aneurysm Center offers innovative, minimally invasive treatment options that help you recover faster with less pain and decrease the likelihood of an aneurysm recurring. Our experts make Johns Hopkins one of the top facilities in the country for diagnosing and treating brain aneurysms.

Learn more about the Aneurysm Center.