Several diseases may lead to TM or may mimic the presentation of myelitis and should be investigated at the time of acute symptoms. The following is a list of some diseases that should be considered when a patient is evaluated for transverse myelitis: 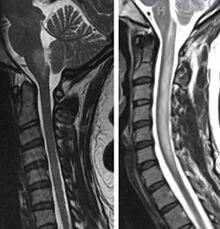 NMO is a rare relapsing autoimmune disorder that preferentially causes inflammation in the optic nerve and spinal cord. It is characterized by longitudinally extensive myelitis (myelitis which is 3 vertebral segments in length or greater), which can leave patients quite debilitated at presentation, and unilateral or bilateral optic neuritis. Some patients may present initially with optic neuritis or myelitis or both. Blood testing includes an anti-aquaporin-4 antibody (NMO-IgG) test, which is highly specific (>99%) with fair sensitivity (about 58%). Treatment for this disease involves acute management with therapies including IV methylprednisolone and PLEX, and prevention of future attacks with immunosuppressants including mycophenolate mofetil or rituximab, and aggressive rehabilitation. 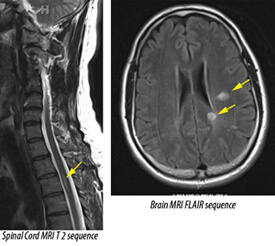 TM is sometimes a feature of relapsing-remitting multiple sclerosis (MS). This type of TM may be associated with demyelination or focal inflammation in the white matter of other regions of the central nervous system. In the past, many patients with monophasic forms of TM were erroneously classified as MS and, likewise, some MS patients were misdiagnosed as TM. The right diagnosis is critical for future management as treatment strategies may be very different for patients with MS compared to those with TM. In patients diagnosed with TM, a brain MRI and CSF studies are quite important to clarify the presence of MS. Brain MRI may help to identify the existence of areas of demyelination in other regions of the central nervous system other than the spinal cord. CSF studies may be helpful to determine if antibodies are being synthesized within the central nervous system (e.g., oligoclonal bands), a finding that may support a diagnosis of MS.

Systemic lupus erythematosus (SLE), often called lupus, is an autoimmune disorder that may involve the nervous system. Some of the most common symptoms are a facial rash, inflammation of the linings of the heart and lungs and kidney disease. About 1-3% of those with lupus develop TM.

Intravenous steroids and other immunosuppressant treatments have been shown to improve the outcome in patients who develop lupus after they are diagnosed with TM. This relationship can be complex to find, however, because some classic features of lupus are absent in those with transverse myelitis. For example, the usual MRI and spinal tap studies can come back normal when in fact inflammatory white cells or antibodies may produce myelitis or blood clots within the artery supplying the spinal cord, causing symptoms of myelitis or myelopathy.

Sjogren’s syndrome (SS) is an autoimmune or rheumatological disorder that frequently presents in young women and is associated with autoimmune attacks that affects exocrine glands. Patients with SS develop dry mucous membranes (e.g., dry eyes and mouth) and occasionally may present with neurological symptoms such as TM and peripheral neuropathy. Patients with TM associated with SS may experience recurrences or present with similar profiles as patients with NMO. The diagnosis of SS is achieved by assessment of autoantibodies in blood as well as other approaches such as lip biopsy and Schirmer test (assessment of production of tears). 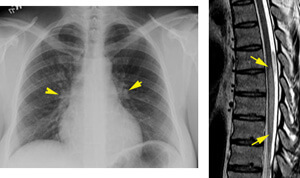 Sarcoidosis is a systemic granulomatous disease that affects mostly the lungs and lymph nodes. However, 10-15% of patients may have neurological complications (neurosarcoidosis) that may be manifested as transverse myelitis, meningitis and other neurological problems. Myelopathies associated with neurosarcoidosis are frequently longitudinally extensive subacute or chronic and may produce significant neurological disability.

Myelitis can occur as a result of direct infection of the neurons (e.g., polyomyelitis) and supporting cells within the spinal cord (e.g., herpes viruses), or as a result of cytotoxic immune responses against viruses (e.g., human T lymphotrophic virus –HTLV- infection-associated myelopathy [HAM]). TM may also follow recent infections (post-infectious TM) such as viral and bacterial systemic infections. Retrospective studies in TM have reported 30-60% of patients describe a preceding infection, usually involving the upper respiratory tract. Some specific infections disorders have been associated with TM:

Some nutritional problems such as vitamin B12 deficiencies may produce myelopathic symptoms that mimic myelopathies. Assessment of vitamin B12 deficiency is critical during early diagnosis studies of patients suspected to have TM as this is a condition is can be treated easily with vitamin B12 supplementation. Copper deficiencies have been found more recently in subset of patients (e.g. following barometric surgery) that exhibit myelopathic or neuropathic symptoms. Copper concentration in blood samples may be helpful to reach the diagnosis of copper deficiency and supplemental treatment may be used for improvement of symptoms. Rarely, some metabolic and mitochondrial disorders may produce myelopathic symptoms that resemble TM. In such cases, more extensive studies to evaluate metabolic pathways, genetic defects in mitochondria genome and energetic studies may be needed.

Patients who get TM as a result of vascular disease may be young or older, and frequently do not have risk factors for cardiovascular disease. However, some patients at risk of vascular spinal stroke may have recently undergone a chest or abdominal operation, or experienced mechanical trauma. Other patients develop the disease due to an abnormally organized blood vessels on the surface of the spinal cord (e.g., arteriovenous malformation or arteriovenous fistulas) that either impair blood return away from the spinal cord or cause bleeding into the spinal cord. This diagnosis may be difficult, and is often missed. A physician may choose to use a spinal angiogram or myelogram for diagnosis of vascular problems of the spinal cord. Several procedures exist to halt the symptoms of myelopathy due to vascular disease and involve the use of novel interventional neuroradiological techniques.

To request an appointment or refer a patient, please contact the Johns Hopkins Transverse Myelitis Center at 410-502-7099, option 1.
Request an Appointment