Saved By The Bell

Up until last September, I had never stepped foot in radiation oncology—nor did I want to. But that all changed as my daughter Rachel, 26, neared the end of her treatment for Hodgkin’s lymphoma. Diagnosed in Oct. 2008, she received chemotherapy and a bone marrow transplant at Johns 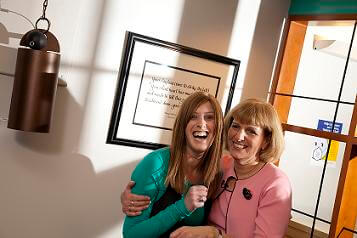 Hopkins. Rachel went through so much. As a mother, I had never felt so bereft, so helpless—there’s nothing worse than watching your child suffer.

Then we learned that Rachel had a complete response to treatment and the doctor suggested radiation to shrink lingering nodes and to prevent recurrence. We were elated to have reached this point. Four weeks later, assuming all went well, Rachel could get on with her life.

On the first day we walked into radiation oncology, we soon noticed an oddly-shaped piece of steel dangling near a wall in a waiting area. We wondered what it was, until we saw a patient strike it like a gong. And suddenly we realized that we were witnessing a momentous rite of passage–the end-of-treatment bell.

The bell rings every day; it can even be heard in the adjoining Weinberg garage. But it’s hard to say
what’s louder, the bell or the ovation that ensues.   (Rachel and Judy Minkove after Rachel struck the bell, 10-8-09)
Up to 140 patients a day come through the unit for treatment. Used as an adjunct to chemotherapy or as a definitive treatment to control malignant cells, radiation therapy requires patients to lie motionless in awkward positions while red lasers pinpoint the site to be treated.

Marian Richardson, the unit’s nurse manager, acknowledges that the therapy is pretty grueling. Patients return daily for four to eight weeks of treatment, which can bring on side effects like burning, itchy skin, nausea and fatigue. She’d read about an end-of-treatment bell at her former employer in Houston that had boosted spirits and that had become an instant hit with patients and staff. So two years ago, Richardson presented the idea to her team. She suggested that the unit hold a poetry contest. The best poem would be framed and posted next to the bell.

“We all thought Marian was crazy,” recalls radiation oncology clinical associate Roz Watson, who, like several others, feared that no one would go near the bell. “What if patients have a relapse and need to come back for more treatments?”

But the bell has turned out to be the best thing Richardson could have done, admits Watson. Hardly a day goes by that she doesn’t hear patients say, “When it’s my turn, I’m gonna hit that thing so hard!”

Even Richardson has been surprised by the bell’s impact. From the outset enthusiasm ran high. More than 15 people submitted poems. The winning entry, voted on by staff, came from Mary Kathleen Adcock, who had battled stage IV tonsil cancer and is now in remission. As it happens, Adcock’s sister, Maggie Dudik, is a Weinberg radiation oncology nurse who is in remission for breast cancer.

“I know what it’s like to go through this,” says says Dudik, “It’s such a wonderful thing to watch patients hit that bell. People fly in relatives, take pictures and bring in cake.”

And my family was no different. On the last day of my daughter’s treatment, I felt like my heart would burst. We invited 20 friends and family members. One of our guests, who herself had battled Hodgkin’s said, “You’ll remember this day like you’ll remember her wedding.”

It was the culmination of a dark year-long journey when Rachel rang that bell last month, and she hit it with every ounce of strength she could muster. This is no dainty tinkling dinner bell. It reverberates throughout the entire waiting area. I can still conjure that sound. Says Rachel, “I feel like it’s ringing in a new year—a fresh start—a time for health and happiness.”

Your day has come to strike the bell!
Your silent heart has much to tell
And much to toll this proud new day
Treatment done, you’re on your way.

Grit and Grace: How My Daughter Survived Cancer

This poem was written in honor of the author’s daughter, Rachel, who recently turned 26 after a year of treatment for Hodgkin’s lymphoma. Now officially in remission, she was aided by chemotherapy and a bone marrow transplant from her brother, Sam.

Her thinning brows furrow as she ascends the stairs
To fill the heart-patterned bag.
Magazines, iPod, DVD in tow—
An armamentarium of distractions To counter chemo’s blow. 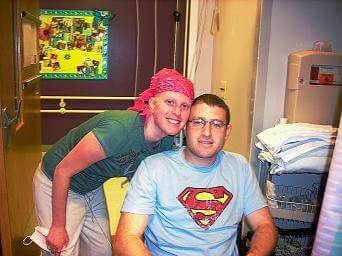 And yet she grasps the score—
Needles still frighten her to the core.
So she pops a sedative, grabs a bite and groans about the hour,
Hopeful that the warm packs will coax her stubborn veins, with staying power.

Coat atop her shoulders, she heads for the car.
“Put in the CD,” she says, as we round the Pepsi sign on 83.
Anticipating sultry Leona’s refrain, we exchange tired smiles,
Together we mime, It’ll all get better in time.

Twenty minutes later, we arrive
For the biweekly fix.

Walking into the crowded waiting area, we enter
The world of the unwell—
A sea of hairless wonders and their loved ones
Suspended between despair and hope.
Like us, they know that only time will tell.

How can this many people have cancer?
How can our exuberant, young beauty be so sick?

Time stands still, faces lose color.
Rachel beams a greeting
To those who meet her summer-sky eyes.
But soon she begins to zone out
In that tight space we so despise.

Her veins won’t cooperate;
The phlebotomist has to stick her twice.

We return to our seats until the blood results come in.
Ninety minutes later, we’re called back to the pod for the cocktail
Unceremoniously, the nurse hangs it from Rachel’s I.V. pole.
As the meds traverse her veins,
She watches a movie and peruses her e-mail.

To the cacophony of infusion pumps’ beeps,
We bide our time.

Friends and family, desperate to ease our pain,
Leave upbeat messages
Blanketing us with love—
A network of support that never seems to wane.

Hours later we gather our things
Dreading what lies ahead.
Days of nausea, dizziness, fatigue,
Recuperating at her childhood home
When she should be with friends, in her own league.

En route home, we pass the foliage we once loved.
Decaying leaves now only feed our fears.
She barely makes it up the stairs
To sleep off the day’s indignities.
While her parents fight tears.

She pulls us into her reverie.
And for those moments we soar.
It won’t last, we know,
But her spirit moves us to the core.

Weep, Rejoice, Weep.
If only her father could sleep.
Thankfully, exhaustion propels me to unconsciousness.

Come December,
The scan shows dramatic strides.
And we indulge our hopes once more.
She sends out breezy updates—
But only G-d knows what’s in store.

More dances through the house.
Whoa, we’re halfway there! Whoa, livin’ on a prayer.
Take my hand, we’ll make it I swear. 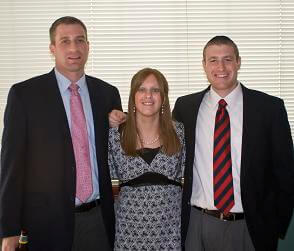 By March she’s booked a flight to a friend’s wedding.
Sending out sunny updates,
She dares to believe health will be restored—as do we.
We just have to wait and see.

Budding azaleas tease our hopes
As the last day of treatment nears,
Friends and family cheer us on to allay our fears.

Passover Eve is upon us—so much to do.
A time of redemption, new beginnings
But PET scan results loom, too.
Mild symptoms have resurfaced, giving us pause.
We wonder about their cause.

And then comes a torrent of unwelcome words.
The cancer has progressed,
No time to waste, stronger chemo,
Bone marrow transplant.

Crushed, engulfed in grief,
We limp through the holiday.
Loved ones again rush to our aid.
They will not allow our resolve to fade.

Charming the phlebotomists, our strapping boys
Banter about who would be best suited for the role
With one-in-four odds, a match may be an attainable goal—or not.
Either way, Jon and Sam give their sister everything they’ve got.

Rachel, meanwhile, pours through fan mail, calls and gifts.
Friends envelop her with love in myriad ways.
She heads for a spa, then New York
Before the flurry of tests consume her days.

She asks a friend to create another CD mix
Only fight songs this time, she urges,
For an optimist like her, a necessary fix.

The roller-coaster rhythm returns.
Procedures, appointments galore
Followed by crippling chemo
That blurs her vision, triggers nausea and much more.

A playful expression bursts onto her face.
She pops in the CD, jumps to her feet, gyrates and belts out: Makes me that much stronger,
Makes me work a little harder.
Thank you for making me a fighter!

Sam, we soon learn, is the one.
Grateful for the chance to save his sister’s life,
He can barely wait for the procedure to be done.

This time Rach packs a bigger bag for what will be a month-long stay,
She brings along her quilt, photos and her latest purchase: an LSAT review text—for a good day.

The transplant takes place without a hitch
We shuttle from Sam to Rachel
For the life-saving procedure that lacks a single stitch.
All goes as planned
Family bonds feel tighter.
We thank G-d for making her a fighter.

But the ensuing days are hell
As Rachel’s falling energy and spirits tell
Side effects so severe, blood counts so low
Tears from all of us begin to flow.

Only twice does she seem defeated.
Her friends perk her up—always there when they’re needed.
She clocks dozens of laps around the unit with an I.V. pole,
Knowing that doing so may get her home faster and soothe her soul. 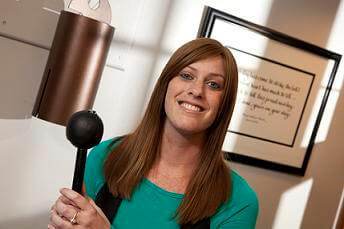 At last she comes home
Weak as can be
But jubilant for having regained some normalcy.
We learn that the transplant has taken root,
And though she may not be cured,
We see signs that she’s becoming more self-assured.

Time marches on, albeit too slowly.
She ventures out more, walks for miles and gears up for the scans.
We are elated with the results
At last she can make plans.

But first one last torture—radiation to the chest.
We say OK: Just do what’s best.
More fatigue, tender skin
No matter: A new life is about to begin.

As treatment nears its bitter end,
Rachel turns 26.
Clearly a birthday like no other
Now that Sam’s DNA has been added to the mix.

She has taught us all how to live, how to give
With grit and with grace.
You need only look at her face.
She’s got that boom, boom, boom!

With all she’s been through
There’s virtually nothing she can’t do.
And thank G-d, we can sing
Happy Birthday to you!

Promise and Progress
The magazine of the Sidney Kimmel Comprehensive Cancer Center at Johns Hopkins.