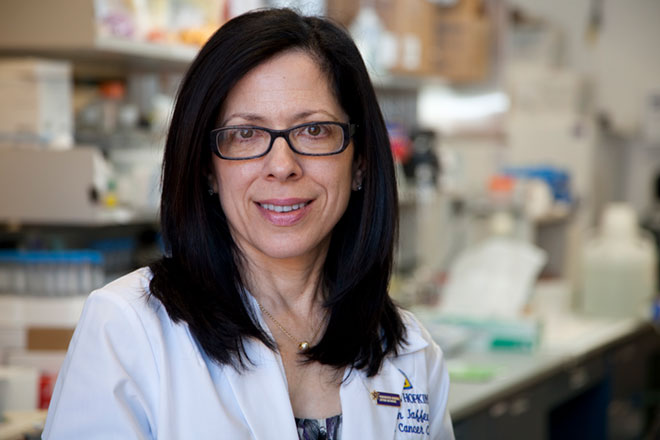 The Johns Hopkins Kimmel Cancer Center has a long and well-recognized history of innovative research and treatment for colorectal cancer patients.

Johns Hopkins scientists are leading ongoing clinical trials of checkpoint inhibitor drugs that were first developed at Johns Hopkins, such as nivolumab, along with ipilimumab and pembrolizumab for metastatic colon cancer. Other clinical trials are testing the safety and effectiveness of a cancer vaccine called GVAX, which was developed at Johns Hopkins. Scientists at Johns Hopkins also found that mistakes in so-called mismatch repair genes, first identified by Johns Hopkins and other scientists two decades ago, may accurately predict who will respond to certain immunotherapy drugs known as PD-1 inhibitors. Such drugs aim to disarm systems developed by cancer cells to evade detection and destruction by immune system cells.

In addition, our scientists are studying the link between dense mats of interacting bacteria, called biofilms, present in colon cancers and pre-cancerous polyps. These bacterial bunches, they say, may represent an increased risk for colon cancer and could form the basis of new diagnostic tests. The scientists believe that these biofilms aid digestion, metabolism and immunity in normal circumstances, but may promote inflammation in the colon, which is often linked to cancer.  Learn more about immunotherapy and The Bloomberg~Kimmel Institute for Cancer Immunotherapy.

Epigenetic changes are changes to how DNA is packaged within a cell that can affect how genes function. Johns Hopkins researchers are among the leaders of the VARI–SU2C Epigenetics Dream Team that hope to bring epigenetic drugs to clinical trials for colon cancer. One recent study led by Johns Hopkins team members, for instance, found that an experimental drug called guadecitabine could help “re-sensitize” patients with advanced colon cancer to a common type of chemotherapy.

Johns Hopkins researchers were the first to identify genetic mutations related to inherited syndromes such as hereditary non-polyposis colon cancer (HNPCC) and familial adenomatous polyposis (FAP), as well as mutations that contribute to sporadic (or nonhereditary) colon cancer. Families with a history of colon cancer or genetic syndromes can now benefit from genetic testing for these mutations. More information and a registry for patients is available from our Hereditary Colorectal Cancer Registry.

Researchers at Johns Hopkins are also developing genetic tests to determine which patients may respond best to checkpoint inhibitor therapy. Other studies conducted by our scientists are examining how mutations in the KRAS gene might predict how patients respond to antibody drugs called EGFR inhibitors.

The colon cancer team routinely screens patients for microsatellite instability (MSI), which refers to mutations in the genes that help to regulate DNA function, sometimes called “spell-checker genes.” Studies show that patients with high microsatellite instability (MSI-H) may respond better to some checkpoint inhibitor drugs, but have a worse response to certain types of chemotherapy.

Researchers at Johns Hopkins also are among the first to study bacterial “mats,” called biofilms, within the colon. They are studying how these biofilms differ throughout the colon, how they develop and interact with the immune system over time and whether these biofilms produce inflammation that increases the risk of colon cancer. The researchers hope to develop a screening test for this biofilm that would help to predict cancer risk.

For more than 25 years at the Johns Hopkins Kimmel Cancer Center, internationally renowned cancer researcher Bert Vogelstein and colleagues have slowly been unraveling the genetic mysteries of colorectal cancers. His discoveries have led laboratories across the country to develop genetic tests, screening diagnostics and targeted therapies for colon and other cancers.

Dr. Vogelstein and his laboratory personnel have made many significant findings in cancer genetics. In 1989, they identified in colon cancers mutations in a gene called p53, starting a media frenzy as investigators around the country found similar mutations in breast, lung and other cancers. These mutations occurred late in cancer development, prompting Dr. Vogelstein to hypothesize that colon cancer results from a series of genetic alterations evolving over decades.

To study the whole series of mutations and the order in which they occur, he decided to look at inherited colon cancer syndromes. Though these colon cancers were more rare, he felt the same genetic underpinnings affecting families could shed light on all colon cancers. Vogelstein, lab co-director Kenneth Kinzler, pathologist Stanley Hamilton and others identified a mutation of the APC gene in Familial Adenomatous Polyposis (FAP), a rare inherited syndrome marked by hundreds of benign colon polyps. Additional studies found the same mutation jump starts the cancer process in the nearly 140,000 people diagnosed with colon cancer each year.

Other researchers in the lab discovered the genetic and biochemical basis of hereditary non-polyposis colon cancer (HNPCC), accounting for more than 50 percent of inherited colon cancer syndromes. In 1998 the team reported a genetic alteration affecting as many as 400,000 people nationwide---6 percent of Ashkenazi, or European-descendant Jews. The finding catapulted genetic testing for cancer into mainstream medicine.

Based on the APC finding, the lab set out to look for mutations in colon cells shed and passed in stool, hoping that if they found APC mutations they could potentially prevent cancer from occurring. They went on to develop a safe and reliable stool test that can detect the earliest, curable stages of colon cancer. Early studies of the test, which uses a newly developed technology to detect and highlight a key genetic marker of the disease, were reported in a 2002 issue of The New England Journal of Medicine.

Building on that work, a series of studies by researchers here and at other institutions around the world published in 2009 identified four potential biomarkers for colorectal cancer that appear in affected patients’ stool, paving the way for new, noninvasive methods of screening for colorectal cancers. The studies indicate that methylation – a chemical process that alters a gene’s expression – in the genes TFPI2, GATA4, GATA5, and NDRG4 occurs early and frequently in colorectal cancers. The altered genes were identified in stool samples from colorectal cancer patients but were rarely seen in samples from people who did not have cancer, indicating that stool tests to check for these changes could be effective in early identification of colorectal cancers. Ongoing research efforts will examine if searching for more than one marker at a time could identify additional cancer patients; look for additional genes that may serve as potential biomarkers of disease; and see if testing methods can be made more accurate.