Iaan: A Fight to Go Home 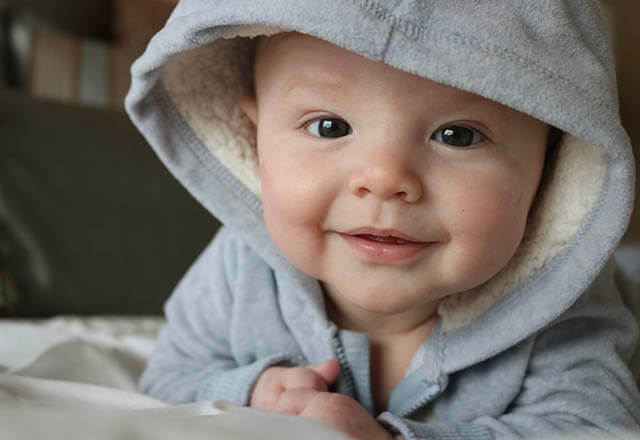 During Lisa’s 20-week-ultrasound, doctors discovered a rare gastrointestinal defect: an obstruction in her baby’s intestines known as duodenal atresia, or “double bubble.”

Her husband, Eric, who was serving our country overseas, returned home so they could figure out the best next steps for prenatal care before he had to return six days later. Extensive research led them to a “couple” of doctors at Johns Hopkins: Ob/Gyn Angie Jelin, who would take care of Lisa throughout the rest of her pregnancy, and Fetal Program Director Eric Jelin. The doctors also happen to married.

Eric again returned home in time for Lisa’s delivery, where the couple faced another complication when the umbilical cord wrapped around Iaan’s neck, cutting off his oxygen. Lisa held her son for a mere 30 seconds before doctors took him to prepare for lifesaving surgery at Johns Hopkins Children’s Center.

After a 6 1/2-hour surgery for a condition called duodenal atresia on his first day of life, Iaan was monitored in the neonatal intensive care unit for 24 days. When Iaan was finally discharged, Lisa sensed something wasn’t right. She feared all her worries would come to fruition when she received a call one week later that Iaan’s numbers weren’t right and they needed to return to the Children’s Center for surgery on a previously undetected choledochal cyst. Pediatric Surgeon-in-Chief David Hackam assembled a large care team for Iaan’s second emergency surgery and assured Lisa they could “fix” Iaan. Doctors removed his gallbladder and bile duct, then recreated a bile duct by taking a portion of Iaan’s small intestine and attaching it to his liver.

After a second extended stay at Johns Hopkins Children’s Center, Iaan was discharged — this time, hopefully for good. At almost 6 months old, Iaan’s playful laugh brings much joy to his two older siblings and his parents. He is undergoing physical and occupational therapy at home to strengthen his abdominal muscles and meet milestones. Iaan’s doctors and surgical team expect he’ll make a full recovery and could “become an Olympian in any sport he wants to.”