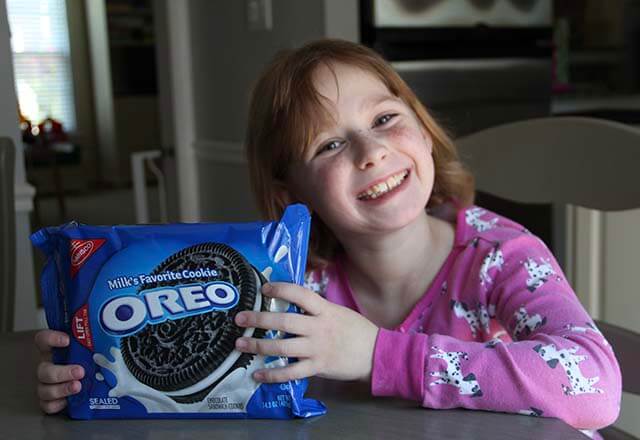 Emmy was born a healthy and happy baby, but when 5 months old her parents, Karly and Dave, noticed she had developed red, blotchy patches of eczema and she was constantly scratching her skin. Her pediatrician told Karly and Dave not to worry because it was a fairly common condition in babies.

A month went by. Up until this point, Emmy had been nursing. When it came time for Dave to give Emmy her first formula bottle, he immediately noticed something was wrong: Emmy was pushing the bottle away as her face turned bright red. She had such swelling of the face that she was unrecognizable. She also had shortness of breath and a weak pulse, and her body was covered in hives. An ambulance ride to the hospital revealed she was having an anaphylactic reaction to the dairy found in baby formula.

Additional food allergy testing revealed that Emmy had life-threatening food allergies to dairy, soy, peanuts, tree nuts, eggs, shellfish, fish, wheat, gluten, sesames seeds, garlic and other common foods. Her allergies were so severe that in addition to having an anaphylactic reaction, she would also experience skin contact reactions such as hives and rashes from touching surfaces that had food residue.

The reality of life with food allergies was difficult for Emmy and her parents. Even simple outings—such as going to the grocery store—would cause Emmy to have a reaction due to food residue on the grocery carts. It was hard for Emmy to socialize with other children because the fear of a life-threatening reaction was all too real. Karly decided not to go back to work, because their lifestyle became too time-consuming. With the severity of Emmy’s allergies, no day care provider could safely care for her. Their home became the only safe space.

When Emmy was 3.5 years old she had her first appointment with food allergy specialist Robert Wood at Johns Hopkins Children’s Center. Karly and Dave were hopeful because, for the first time in Emmy’s life, a doctor truly understood the severity of their situation.

Karly recalls that first meeting with Dr. Wood as life changing: “From that moment on, our life with food allergies has done nothing but improve because we were given the knowledge to empower those around us on how to create a safer environment for her.”

Three years later, Emmy was asked to be part of a wheat allergy clinical trial. The trial involved ingesting minimal and increasing amounts of wheat—under Dr. Wood’s close supervision—to hopefully help reduce the allergy’s severity. Karly and Dave were conflicted because of the physical and emotional toll the study would take on Emmy. However, if something could eliminate the risk of death, they knew they needed to do it. They accepted the spot in the study.

After two years, Emmy could fully tolerate wheat. Her diet is broader than ever, and Karly feels more comfortable sending her out into the world. Currently, Emmy is participating in a triple allergen study. If successful, she may be able to eat milk, eggs and peanuts.

Today, Emmy, now age 12, and her family are confident about the future. She wishes she didn’t have allergies, but she says they’ve made her a stronger person. “I consider them a special part of me,” she says. “They made me who I am today.”