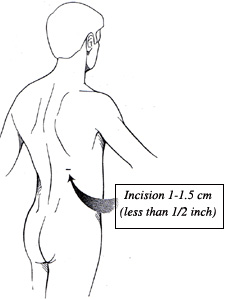 Kidney stones are formed in the urinary tract due to crystallization of chemical compounds in the urine. PCNL is a technique used to remove certain stones in the kidney or upper ureter (the tube that drains urine from the kidney to the bladder) that are too large for other forms of stone treatment such as shock wave lithotripsy or ureteroscopy.

This procedure has been performed on many patients over the last several years and is accepted standard of care for patients with kidney stones that are large, very firm, or resistant to other forms of stone treatment. As such it has replaced open operations for kidney stones in the vast majority of patients.

Typically, the length of the surgery is three to four hours. The surgery is performed by making a small 1 cm incision in the patient’s flank area (Figure 1). A tube is placed through the incision into the kidney under x-ray guidance. A small telescope is then passed through the tube in order to visualize the stone, break it up and remove it from the body. If necessary a laser or other device called a lithotripter may be used to break up the stone before it can be removed. This procedure has resulted in significantly less post-operative pain, a shorter hospital stay, and earlier return to work and daily activities when compared to open stone surgery.

This technique also has a higher success rate for clearing all stones in one setting than other techniques such as extracorporeal shock wave lithotripsy (ESWL), which often require several attempts.

Although this procedure has proven to be very safe, as in any surgical procedure there are risks and potential complications. The safety and complication rates are similar when compared to the open surgery. Potential risks include: