What is nuclear medicine?

Nuclear medicine is a specialized area of radiology that uses very small amounts of radioactive materials, or radiopharmaceuticals, to examine organ function and structure. Nuclear medicine imaging is a combination of many different disciplines. These include chemistry, physics, mathematics, computer technology, and medicine. This branch of radiology is often used to help diagnose and treat abnormalities very early in the progression of a disease, such as thyroid cancer.

Because X-rays pass through soft tissue, such as intestines, muscles, and blood vessels, these tissues are difficult to visualize on a standard X-ray, unless a contrast agent is used. This allows the tissue to be seen more clearly. Nuclear imaging enables visualization of organ and tissue structure as well as function. The extent to which a radiopharmaceutical is absorbed, or "taken up," by a particular organ or tissue may indicate the level of function of the organ or tissue being studied. Thus, diagnostic X-rays are used primarily to study anatomy. Nuclear imaging is used to study organ and tissue function.

After the radionuclide has been given and has collected in the body tissue under study, radiation will be given off. This radiation is detected by a radiation detector. The most common type of detector is the gamma camera. Digital signals are produced and stored by a computer when the gamma camera detects the radiation.

By measuring the behavior of the radionuclide in the body during a nuclear scan, the healthcare provider can assess and diagnose various conditions, such as tumors, infections, hematomas, organ enlargement, or cysts. A nuclear scan may also be used to assess organ function and blood circulation.

In planar imaging, the gamma camera remains stationary. The resulting images are two-dimensional (2D). Single photon emission computed tomography, or SPECT, produces axial "slices" of the organ in question because the gamma camera rotates around the patient. These slices are similar to those performed by a CT scan. In certain instances, such as PET scans, three-dimensional (3D) images can be performed using the SPECT data. 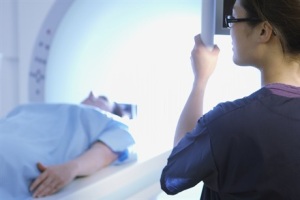 Scans are used to diagnose many medical conditions and diseases. Some of the more common tests include the following:

How are nuclear medicine scans done?

As stated above, nuclear medicine scans may be performed on many organs and tissues of the body. Each type of scan employs certain technology, radionuclides, and procedures.

A nuclear medicine scan consists of 3 phases: tracer (radionuclide) administration, taking images, and image interpretation. The amount of time between administration of the tracer and the taking of the images may range from a few moments to a few days. The time depends on the body tissue being examined and the tracer being used. Some scans are completed in minutes, while others may need the patient to return a few times over the course of several days.

Although each facility may have specific protocols in place, generally, a resting RNA follows this process: