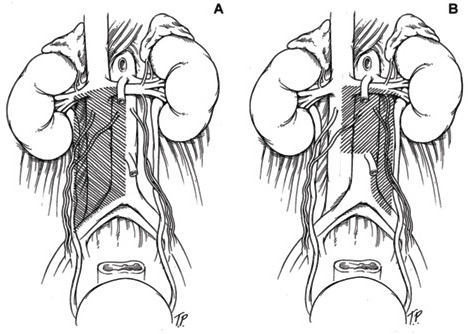 As the testicles form and develop near the kidneys in a fetus, the blood supply, lymphatic drainage and nerves to the testicle originate near the kidney on that side. Therefore, testis cancer has a very predictable pattern of spread. The primary landing zone for metastases from testis cancer is the lymph nodes of the retroperitoneum — the area around and between the aorta and inferior vena cava at the level of the kidneys. Therefore, retroperitoneal lymph node dissection (RPLND) is an important surgical option for men with testis cancer.

Traditionally, RPLND is done through a large, midline incision (along the entire abdomen) and only performed at high-volume centers of excellence due to the rarity of disease and technical challenges of the surgery. More recently, minimally invasive RPLND has become an option for men with testis cancer, dramatically reducing the convalescence of the operation and offering the benefits of avoiding chemotherapy and rigorous AS. RPLND was a mainstay of therapy for clinical stage I non-seminomatous germ cell tumors (NSGCT) as it better staged disease and offered a therapeutic benefit for many patients. However, upwards of 70% of patients will never need an RPLND and are overtreated by surgery. RPLND has fallen out of favor with many physicians and organization due to the morbidity of the procedure and high risk of overtreatment.

Minimally invasive RPLND changes the thought process for CSI testis cancer, as it changes the ratio of risk to benefit as the morbidity associated with the procedure is dramatically reduced compared with traditional open surgery. In addition, minimally invasive RPLND can be performed for patients with suspicion of low-burden lymph node metastases (clinical stage II) in the hopes of avoiding chemotherapy.

A minimally-invasive RPLND involves the use of small incisions and instruments to perform an RPLND. Johns Hopkins was one of the pioneering institutions in minimally invasive RPLND, performing over 100 laparoscopic RPLNDs since 1992. With robotic technology, most minimally invasive RPLND are performed with robotic assistance as this technology allows better control and more precise dissection around important vascular structures and the nerves that control ejaculation.

Most minimally invasive RPLND are performed in men with clinical stage I non-seminomatous germ cell tumors. These men do not have any visible enlarged lymph nodes. For these men, a unilateral (or one-sided) template dissection can be performed. The lymphatic drainage in the body goes from right to left. Therefore men with a left-sided testicular tumor can undergo a left-sided modified template that involves dissection of lymphatic tissue on and around the aorta. For men with right-sided testicular tumors, the lymphatic tissue from around the vena cava to the aorta needs to be removed.

For men with clinical stage II NSGCT tumors, a minimally invasive RPLND can be performed. However, it is recommended that any patient with enlarged lymph nodes undergo a complete bilateral (both-sides) RPLND.

There are many theoretical and real advantages to undergoing minimally invasive RPLND:

A post-chemotherapy RPLND is an extremely challenging surgery. Chemotherapy can cause lymph nodes in the retroperitoneum to fuse to important surrounding structures including the aorta, vena cava, intestines and kidneys. Safely removing the cancerous lymph nodes involves precise dissection and often removal of adjacent organs rather than risk of major vascular or bowel injury. Most post-chemotherapy RPLNDs are performed in a team approach, with vascular, general and thoracic surgeons available on a case-by-case basis. The surgery most often involves a large incision along the entire length of the abdomen and a hospital stay of three to five days. Recovery can take as long as two to four weeks before feeling 100%. However, post-chemotherapy RPLND can be a lifesaving surgery and, when performed at expert centers, has excellent outcomes.

The complication rate for a primary RPLND is about 5% and about 15% for a post-chemotherapy RPLND. Serious complications are rare (less than 2%) and include:

The nerves that control ejaculation (expulsion of fluid from the penis during orgasm) lie in the retroperitoneum. Sympathetic nerves control ejaculation and run lateral and parallel to the great vessels before converging at the base of the aorta (where it branches to form the iliac arteries) before traveling to the seminal vesicles, vas deferens, prostate and bladder neck. With nerve-sparing techniques, the rates of anejaculation are 5–10% for both minimally invasive and open primary RPLND. The rates of anejaculation are higher for post-chemotherapy RPLND as the nerves cannot always be spared to remove cancer.

Serious bleeding occurs in less than 2% of cases. However, bleeding from the aorta or vena cava can require blood transfusion and be potentially life-threatening. In cases where retroperitoneal lymph nodes appear close or adherent to the aorta or vena cava, it is often safer to surgically remove a portion of the blood vessel. Depending on the size of the tumor and complexity of the repair, a vascular surgeon may be a part of the operative team.

As the lymphatic channels in the retroperitoneum are interrupted, rarely a lymphatic leak can occur. Your surgeon will use a variety of intraoperative techniques to prevent lymphatic leak. In addition, as lymphatic fluid is “fueled” by fatty foods, a nutritionist will teach you about a low-fat diet and how to slowly resume a normal diet over the weeks following surgery.

Chylous ascites almost always resolves within a few weeks to months, but can be problematic to treat. Treatments for chylous ascites include restricted diet, placement of abdominal drains (or intermittent drainage), medications to decrease the amount of lymphatic fluids or interventional radiology procedures. Johns Hopkins is an expert center in treating refractory chylous ascites with lymphangiography and sclerotherapy. Surgery is a last resort in rare cases.