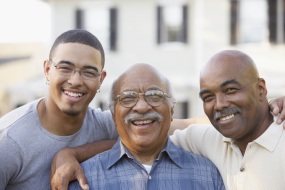 In general, all men are at risk for prostate cancer during their lifetime. However, there are specific risk factors that increase the likelihood for developing the disease.

The Centers for Disease Control and Prevention reports that African-American men have the highest rate of prostate cancer, followed by white, Hispanic, American Indian/Alaska Native and Asian/Pacific Islander men. African-American men are twice as likely to die from prostate cancer as white men, according to the American Cancer Society. Prostate cancer risk may also be elevated in Scandinavian men. Historically, incidence in East Asia (Japan and China) has been low. However, when Chinese and Japanese men immigrate to the U.S., they have an increased risk of developing prostate cancer when compared with their native populations.

For patients with prostate cancer, researchers are looking for foods or nutrients that boost disease-fighting enzymes and help the body ward off prostate cancer.

Medical research suggests that the diet consumed in industrialized Western countries may be a factor in developing prostate cancer. Consider the following information regarding diet and its effect on the risk for prostate cancer:

Are you or a loved one at risk for prostate cancer? Doctors recommend that most men get screened around 55, but some should start even sooner.

Learn if you're at increased risk

Most studies have concluded that obesity does not affect the overall risk of getting prostate cancer. However, obese men may be more likely to develop more aggressive forms of prostate cancer.

Another important risk factor is a positive family history. If you have a father or a brother with prostate cancer, your risk of developing the disease is more than doubled, according to the American Cancer Society. The risk is developing prostate cancer is even higher for men with several affected relatives, particularly if the relatives were young at the time of diagnosis.

For years, men have wondered if sexual activity impacts their risk of prostate cancer. Elizabeth A. Platz, Sc.D., considers the science behind several theories linking sex to prostate cancer. She also reveals the findings of two significant studies designed to put the debate to rest.

See how changes to your sex life could impact your risk