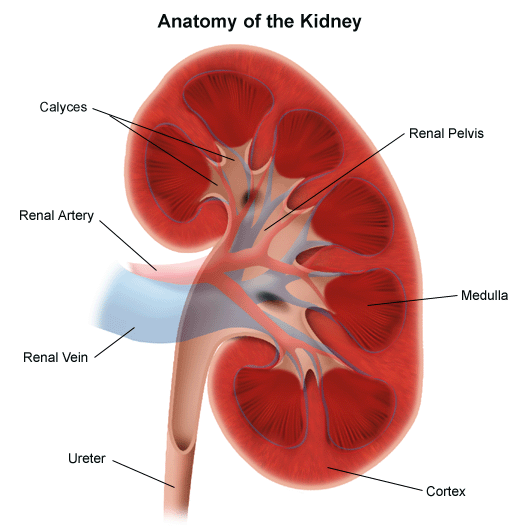 What is polycystic kidney disease?

Polycystic kidney disease (PKD) is a genetic condition marked by the growth of numerous cysts (fluid-filled sacs) in the kidneys. The cysts become larger and the kidneys enlarge along with them. Slowly, the kidneys lose their ability to filter waste from the blood, which leads to progressive loss of kidney function and eventually to kidney failure. Some 600,000 people in the United States have PKD. PKD can also cause cysts in other organs, such as the liver.

There are two inherited forms of PKD:

In the early stages of the disease, people have few — if any — symptoms and relatively normal blood and urine tests, so the disease may be missed until it has progressed. Possible symptoms include:

Autosomal dominant PKD is usually diagnosed by ultrasound of the kidneys, CT scans and MRI tests. The number and size of the cysts increase with age. Thus, even only two cysts in each kidney of a 30-year-old patient who also has a family history of the disease is a strong indicator. A genetic test to detect mutations is usually confirmatory but is not always necessary once symptoms develop.

A child with this form of the disease exhibits symptoms very early in life, even before birth. A child has a 25 percent risk of developing this disease if both parents carry the disease gene. A child must inherit two defective copies of the gene. Often, children with this disorder go on to develop kidney failure before reaching adulthood. In the most severe cases, newborns can die hours after birth because of respiratory failure. In milder cases, symptoms develop later in childhood and in early adulthood. Liver scarring is common in these cases.

Ultrasound of the fetus can show enlarged kidneys. Imaging of the liver is also recommended as the disease scars the liver.

There is no cure for this disease. Treatment focuses on preventing complications and alleviating symptoms. Medications are used to control high blood pressure and to treat urinary tract infections. Growth hormone can be used to improve growth. Dialysis and transplantation are needed once kidney failure develops.

When to call for help

If you suspect your child has PKD and you have family members with PKD, talk to your doctor.