A peptic ulcer is an open sore found on the lining of the stomach or duodenum (the first part of the small intestine).

A gastric ulcer is located in the lining of the stomach. 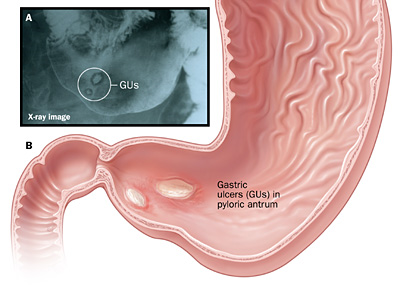 A duodenal ulcer is located in lining of the duodenum. 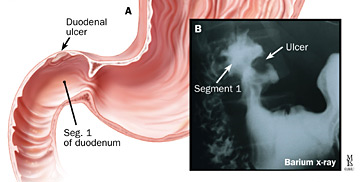 A: Duodenal ulcer; B: Corresponding x-ray

Symptoms of peptic ulcer disease may be similar to other upper gastrointestinal conditions. Symptoms include:

Because the symptoms of peptic ulcer disease are often nonspecific, it is important that you see a gastroenterologist for diagnosis.

Peptic ulcers; A: Malignant; B: Benign

Diagnosis of peptic ulcer disease begins with a comprehensive physical exam. You will be asked about your symptoms and medical history.

Other diagnostic tests your doctor may order include:

Barium contrast radiography (X-ray) or upper gastrointestinal (GI) series are specialized X-rays so your doctor can check for abnormalities.

Barium X-ray does not offer a definitive diagnosis, as it does not distinguish between benign and malignant ulcers. In addition, the X-ray may be difficult to interpret in patients who had previous gastric surgery or scarring from chronic inflammation.

Patients who do not respond to standard therapy for peptic ulcers may need specialized testing. If your symptoms do not improve after eight weeks of therapy, your doctor may want to order special tests. These include:

The endoscopy and biopsy are two parts of the same procedure:

During an upper endoscopy:

An esophagogastroduodenoscopy (EGD) is a specific endoscopy exam to diagnose peptic ulcer disease. This test can identify the ulcer, its location and size.

Trying to limit the production of gastric acid often allows peptic ulcers to heal. The goal of treatment is to reduce the acid through dietary changes and medications, or surgery if necessary. Other treatments aim to strengthen the mucous lining of the stomach.
Learn more about peptic ulcer treatment.