Anatomy of the liver 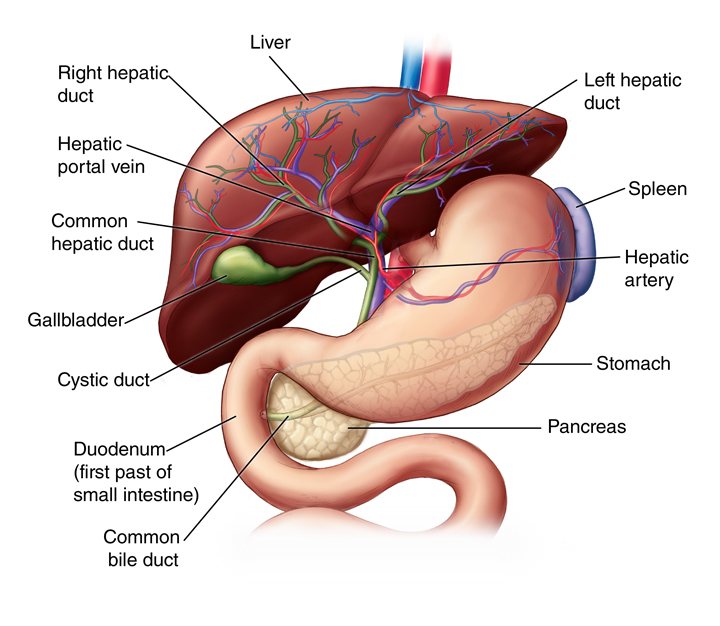 The liver is located in the upper right-hand portion of the abdominal cavity, beneath the diaphragm, and on top of the stomach, right kidney, and intestines.

Shaped like a cone, the liver is a dark reddish-brown organ that weighs about 3 pounds.

There are 2 distinct sources that supply blood to the liver, including the following:

The liver holds about one pint (13%) of the body's blood supply at any given moment. The liver consists of 2 main lobes. Both are made up of 8 segments that consist of 1,000 lobules (small lobes). These lobules are connected to small ducts (tubes) that connect with larger ducts to form the common hepatic duct. The common hepatic duct transports the bile made by the liver cells to the gallbladder and duodenum (the first part of the small intestine) via the common bile duct.

Functions of the liver

The liver regulates most chemical levels in the blood and excretes a product called bile. This helps carry away waste products from the liver. All the blood leaving the stomach and intestines passes through the liver. The liver processes this blood and breaks down, balances, and creates the nutrients and also metabolizes drugs into forms that are easier to use for the rest of the body or that are nontoxic. More than 500 vital functions have been identified with the liver. Some of the more well-known functions include the following: