Inflammatory bowel disease is a term that refers to Crohn’s disease and ulcerative colitis, two inflammatory conditions that affect as many as 1.6 million Americans, most diagnosed before age 35.

IBD is the common name used to describe two chronic diseases of the intestinal tract ― Crohn’s disease and ulcerative colitis ― that cause inflammation in the intestines: 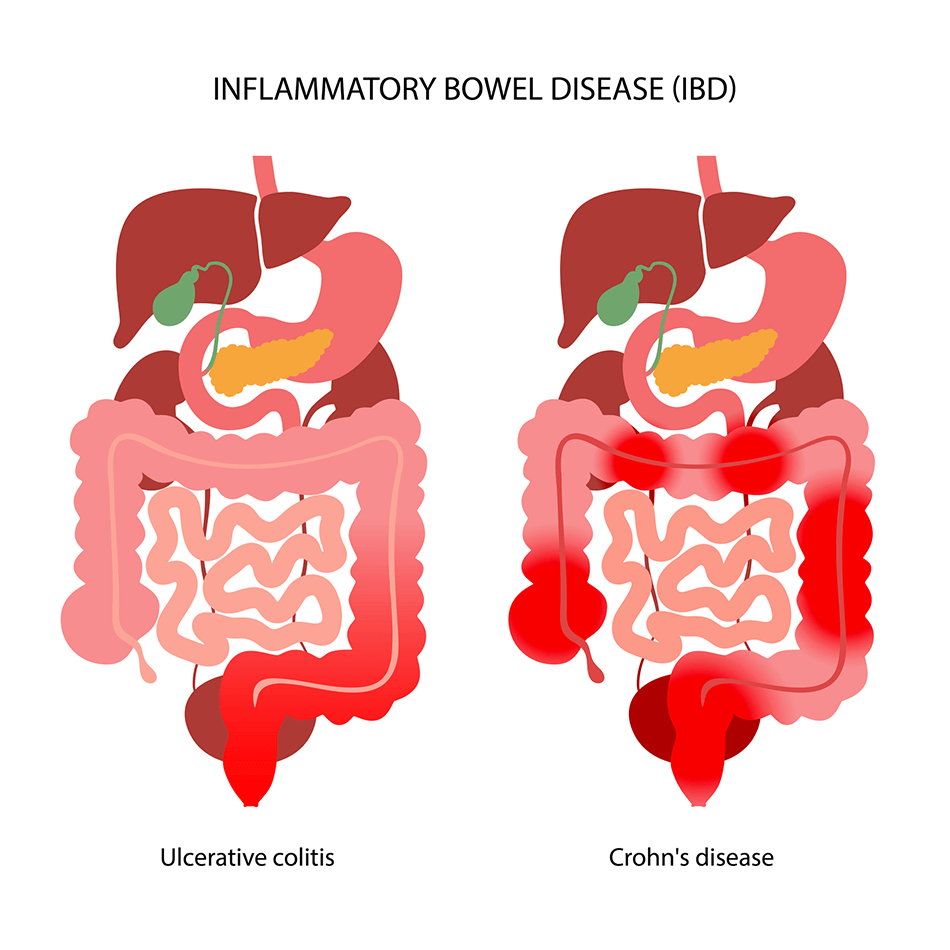 IBD is an autoimmune disorder, meaning the body’s immune system attacks healthy tissues. It is not yet known what triggers these attacks ― and why IBD develops in some people and not in others. However, researchers are working to understand more about the mechanisms behind the condition and the impact of genetic, environmental, infectious, immune and other factors, including the balance of bacteria in the gut.

IBD can affect people in any ethnic or racial group, but statistically, people of Jewish ancestry have a greater risk of developing inflammatory bowel disease. Environmental factors may contribute: IBD is rare in the southern hemisphere.

Yes, IBD can run in families, but it can also develop randomly even if you do not have a family history of IBD. According to studies, between 5% and 20% of those with inflammatory bowel disease have a first-degree relative, such as a parent, child or sibling, with the condition.

Can children have IBD?

Yes, IBD can affect children, and it is more common in teenagers than younger kids. It may take longer to diagnose IBD in children because they may dismiss symptoms, which can also be hard for parents to notice, especially in older kids.

IBD causes a range of problems in the colon and rectum, but can also affect other parts of the body. The symptoms may come and go. People with IBD may experience flare-ups followed by periods with no symptoms.

The first signs of IBD can appear after exposure to something that irritates the intestines, such as a medication (including aspirin, ibuprofen and antibiotics) or a GI infection. The irritation or infection goes away, but the immune system keeps responding.

The condition can also cause swelling or masses, due to inflammation in the intestines. Your doctor may notice these on X-rays and other tests as you are being evaluated for your symptoms.

If inflammation is not controlled, over time IBD can damage the intestines, causing:

In some people with IBD, the inflammation can affect areas of the body outside the intestines:

These two acronyms often get confused. Like IBD, irritable bowel syndrome (IBS) is a chronic condition that affects the intestines. But the diseases are very different.

IBS does not involve inflammation: People with IBS may have periods of constipation followed by periods of diarrhea. This could be caused by heightened sensitivity of the nerves in the intestines or problems with motility ― the coordination of nerves and muscles that move food and waste through the digestive system.

15 Things People with IBD Should Know

IBD usually appears as a sudden flare-up of symptoms. Most people diagnosed with IBD are age 35 or younger. There is a second peak of diagnosis in the 60s.

There is no single test to diagnose IBD. Because the symptoms of IBD overlap with those of several other conditions, including infections and other digestive system disorders, your doctor may recommend a combination of the following to confirm the diagnosis:

Does IBD increase the risk of colon cancer?

Having IBD can increase the risk of colon cancer by up to four times. The longer you live with an inflamed bowel, the greater the chance of cancerous changes happening in the intestinal cells.

If you have had IBD for eight years or longer, get colonoscopies every one to three years depending on your risk factors for colon cancer.

Although there is no curative treatment for IBD, it’s possible to reduce inflammation and address symptoms with a variety of therapies. The goals of treating IBD include stopping future flare-ups and healing inflammation in the intestines, both in the lining and on a deep cellular level. Because IBD often causes issues in different parts of the body, a multispecialty approach to care can be helpful. Specialists in gastroenterology, colorectal surgery, rheumatology, dermatology, ophthalmology and other fields work together to improve quality of life for people with IBD.

IBD treatments may include medications, surgery and a range of diet and lifestyle changes that help reduce inflammation and support the immune system.

Medications are key to treating IBD. Most people with IBD will need to be on at least one medication indefinitely. The goal is easing symptoms, halting inflammation and reducing flare-ups.

It’s important to take IBD medications as prescribed, even if you start feeling better. The sooner medication starts, the better the long-term results, especially in people with Crohn’s disease.

If medications do not calm the inflammation, over time the intestines can become damaged, making symptoms worse and increasing the need for surgery. About half of people with IBD may need surgery at some point in their lives to:

The reasons for surgery and the parts of the intestine that need to be treated differ from person to person. Crohn’s disease usually affects the bottom of the small intestine where it joins the large intestine, an area called the terminal ilium. Ulcerative colitis involves the colon and the rectum. Laparoscopic (less invasive) surgeries can reduce complications, and are preferable when possible.

People with IBD may notice that eating certain foods can have an effect on symptoms. The role of diet in IBD is currently a topic of research, which points to a possible overreaction of the immune system to common bacteria in food as a trigger for IBD flare-ups. Keeping a food diary can help you track when symptoms improve or worsen with the foods you eat.

Although a diet cannot reverse IBD, making some modifications may help reduce the severity of symptoms such as abdominal discomfort and diarrhea. Before changing what you eat, discuss any changes to your diet with your doctor.

About half of people with IBD, especially those with Crohn’s disease, are lactose intolerant and find that dairy products can aggravate bloating and diarrhea. If this applies to you, work with your doctor to ensure you get adequate calcium and vitamin D from other foods that are easier on your digestive system.

Omega-3 fatty acids, the kind in flax seeds, oily fish and other foods, can affect bacteria in your gut and ease inflammation. Including these foods while cutting back on those high in omega 6 (such as red meats and fried foods) can have a positive effect on IBD symptoms.

No studies say a gluten-free regimen gets rid of IBD, but some patients report feeling better, with less bloating, cramps and fatigue.

There are no studies showing that probiotics help people with IBD. Some patients experience symptom relief after taking probiotics, and in those cases, doctors often support continuing probiotics. If you’d like to try probiotics for IBD, you should discuss it with your doctor first.

For people without IBD, a diet high in fiber is healthy, but if you have narrowed bowels due to IBD, undigestible matter from fruits, vegetables and whole grain can become stuck and cause severe symptoms. A low-residue (fiber) diet may be appropriate. On the other hand, for those who can tolerate them, fruits and vegetables are good for gut bacteria and help encourage the growth of less inflammatory species.

A few small studies suggest a diet low in FODMAP (sugars that are hard to digest) can ease IBD symptoms. The diet is very restrictive, but slowly reintroducing foods one by one and noting your response can help you determine specific foods you may need to avoid. If you want to try this approach, it is important to work with a dietician or nutritionist.

Also, certain sweeteners, such as sorbitol, can worsen diarrhea. People with IBD should also avoid alcohol and caffeine if they trigger symptoms.

The impact of smoking on IBD is complex. Smoking complicates Crohn’s disease, and is associated with more severe disease, with penetrating ulcers and narrowing of the intestines. Smokers may end up needing more aggressive treatment for Crohn’s disease, including surgery. Smoking can also decrease the effectiveness of certain Crohn’s disease medications by up to 50%.

Due to the many dangers of smoking, continuing to smoke is not recommended for anyone. People with IBD who smoke should work with their primary care doctors to find the best strategies to quit.

Researchers are looking into other therapies such as stem cell therapy and fecal transplant, but their effectiveness for inflammatory bowel disease is currently under investigation.

Some patients report abdominal pain relief after trying alternative therapies such as acupuncture.

IBD Prognosis and Living with IBD

Because there are no treatments that cure IBD, acknowledging that it is a lifetime disease can help you focus on working with your doctors for long-term symptom relief. You may have periods of remission followed by weekslong flare-ups indefinitely. Appropriate treatment ― and your commitment to it ― can help improve your quality of life.

Once your care plan is established, you will likely see your gastroenterologist once a year, or more frequently, depending on your symptoms. Between these visits, it’s important to continue checkups with your primary care doctor, who can monitor your physical and mental health, review your medications, work with you to handle side effects, and support your commitment to preventing flare-ups.

It’s also important not to become so focused on IBD that you neglect other aspects of your health. Try to stay current with your screenings and preventive care, and contact your doctor for any non-IBD symptoms or signs that could indicate a health problem.

The symptoms of IBD, such as pain, fever and frequent need to use the bathroom, can make it hard to sleep through the night. Difficulty sleeping can also signal that an IBD flare-up is about to happen. Chronic lack of sleep can affect overall health and worsen quality of life. Talk to your doctor about ways to help you get a restful sleep.

Getting vaccines, especially your annual flu vaccine, is crucial since IBD and the medications used to treat it can weaken your immune system, leaving you vulnerable to infectious disease. Work with your primary care physician to ensure you get all the recommended vaccines, including:

Immunocompromised people with IBD should not be inoculated with “live” vaccines. Talk to your gastroenterologist about which vaccines are OK for you to receive and when. Live vaccines include:

Immune-suppressing drugs or biologics for IBD increase the risk of certain cancers in some people. If you take these drugs, such as anti-TNF, methotrexate or immunomodulators, your doctor may recommend:

People taking steroids for IBD may need regular bone densitometry (DEXA) tests or other bone scans if they are:

They may also need to take calcium or vitamin D supplements or prescription medications to prevent osteoporosis.