Clubfoot is a foot deformity classified into three different types: idiopathic (unknown cause), neurogenic (caused by condition of the nervous system) and syndromic (related to an underlying syndrome).

Also known as talipes equinovarus, idiopathic clubfoot is the most common type of clubfoot and is present at birth. This congenital anomaly is seen in one out of every 1,000 babies, with half of the cases of club foot involving only one foot. There is currently no known cause of idiopathic clubfoot, but baby boys are twice as likely to have clubfoot compared to baby girls.

Neurogenic clubfoot is caused by an underlying neurologic condition. For instance, a child born with spina bifida A clubfoot may also develop later in childhood due to cerebral palsy or a spinal cord compression.

Syndromic clubfoot is found along with a number of other clinical conditions, which relate to an underlying syndrome. Examples of syndromes where a clubfoot can occur include arthrogryposis, constriction band syndrome, tibial hemimelia and diastrophic dwarfism.

What are the signs and symptoms of clubfoot?

In a clubfoot, the Achilles tendon is too short, causing the foot to stay pointed — also known as “fixing the foot in equinus.” The foot is also turned in and under. The bones of the foot and ankle are all present but are misaligned due to differences in the muscles and tendons acting on the foot.

What are the risk factors of clubfoot?

Foot imbalance due to clubfoot may be noticed during a fetal screening ultrasound as early as 12 weeks gestation, but the diagnosis of clubfoot is confirmed by physical exam at birth.

The treatment for clubfoot consists of two phases: Ponseti serial casting and bracing. Treatment is always necessary, because the condition does not get better with growth.

The Ponseti technique of serial casting is a treatment method that involves careful stretching and manipulation of the foot and holding with a cast. The first cast is applied one to two weeks after the baby is born. The cast is then changed in the office every seven to 10 days. With the fourth or fifth cast, a small in-office procedure is also needed to lengthen the Achilles tendon. This is done using a local numbing medicine and small blade. Afterward, the baby is placed into one last cast, which remains on for two to three weeks. 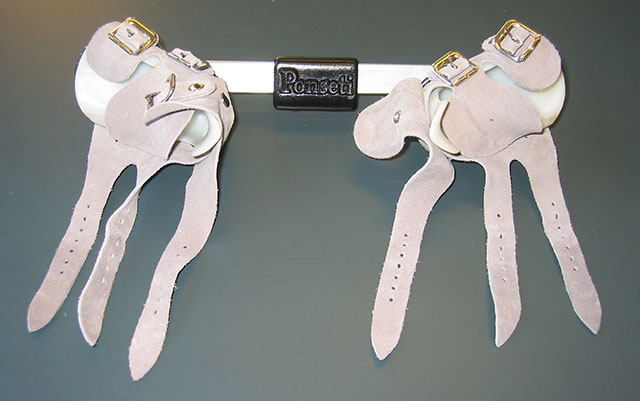 While the casting corrects the foot deformity, bracing maintains the correction. Without bracing, the clubfoot would redevelop. The day the last cast is removed, the baby is fit in a supramalleolar orthosis with a bar. These braces are worn 23 hours a day for two months, then 12 hours a day (naps plus nighttime) until kindergarten age.

Life after Treatment of Clubfoot

A well-corrected clubfoot looks no different than a normal foot. Sports, dance and normal daytime footwear are the expectations for a child born with a clubfoot. This condition will not hold a child back from normal activities.

Information for Parents about the Ponseti method for clubfoot correction