Through dynamic education provided exclusively by Johns Hopkins faculty physicians, A Woman’s Journey seeks to impart up-to-the-minute information about salient health issues for women and empower women to make effective health care decisions for themselves and those they love.

A Woman’s Journey will enhance the health of women and those they love through increased awareness and knowledge of disease prevention, early diagnosis and innovative treatments. 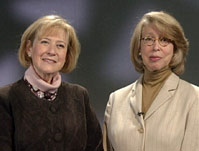 More than 20 years ago two remarkable Baltimoreans approached Johns Hopkins Medicine with an idea that would impact the lives of thousands of women. Both survivors of cancers Mollye Block and Harriet Legum, wanted to empower women to make effective health care decisions for themselves and those they love. Johns Hopkins Medicine accepted their challenge.

The results has been a powerful women’s health conference, A Woman’s Journey.  Since 1995, this Johns Hopkins annual women’s health conference has offered 32 seminars—all taught by Johns Hopkins faculty physicians and scientists.  Women hear first-hand about advances in medicine from the individuals performing research in these medical specialties. From preserving your memory to surviving cancer, this one of a kind program attracts nearly 1,000 registrants. Mothers, daughters, sisters and friends come to learn from Hopkins scientists and from each other.

We hope you will join us at one of our various events.

A Woman’s Journey is sponsored by our media partners and corporate supporters.

Kelly Geer Ripken Named a Chair of A Woman's Journey

Plenary Speaker, Katie Couric was honored for her work as a cancer advocate and co-founder of Stand Up to Cancer at the 19th annual A Woman's Journey conference in Baltimore. Read more about  Kelly Geer Ripken.