The original Suburban Hospital in 1943.

On December 13, 1943, Suburban Hospital opened its doors as a 130-bed hospital to accommodate the growing population in Montgomery County, Maryland and expected demand for medical services during World War II. In its first full year, the small facility, consisting of several one-story cottages, admitted 3,000 patients and had an operating budget of $13,000.

In 1950, the hospital was purchased by the community from the federal government for $125,000. During the late 1950s, the hospital experienced a severe shortage of beds, requiring administrators to enclose sun porches and convert clinic space to accommodate patients. To alleviate the overflow of patients, the Suburban Hospital Association developed a master facility plan to construct three new wings over the next decade.

History of the Rock and the Pool of Bethesda 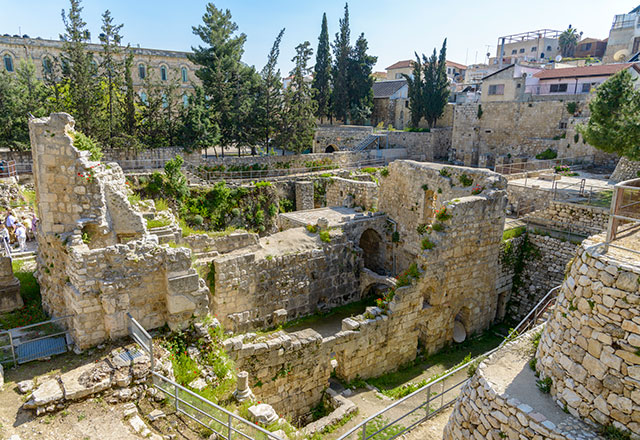 Ruins of the Pool of Bethesda in Jersualem, Israel.

The Pool of Bethesda has existed since ancient times. Its source, the Bethesda Brook, served as one of Jerusalem's most important sources of water. At the time that the Temple Mount platform was built (during the reign of King Solomon), the brook's lower sections were walled up to form pools, the best known being the Pool of Israel and the Sheep's Pool, also known as the Pool of Bethesda.

The Pool of Bethesda was divided into two sections and was rectangular in shape. It was surrounded on all four sides by porches and divided laterally by a fifth porch. The pool was probably used for washing sheep before they were sacrificed in the Temple.

The Pool of Bethesda gained a reputation as having waters with curative qualities. Those seeking cures would immerse themselves in the water, and it was said that "an angel would trouble (stir) the waters."

How the Rock Reached Bethesda, Maryland

One of the goals of the Bethesda-Chevy Chase Heritage Celebration was to make residents aware of Bethesda's history and heritage. While researching the history of Bethesda, Maryland, the staff of the Bethesda-Chevy Chase Center learned that the name Bethesda came from the Hebrew "Bet Chesed" meaning "House of Mercy" and was indeed named for a section of Jerusalem which existed from the time of King Solomon.

After doing this research, the staff contacted the Embassy of Israel and asked about the possibility of obtaining a rock from the ancient pool. The Embassy response was extremely enthusiastic. Because the pool is partially filled in today, a stone was excavated for us by the Chief Architect of Jerusalem and flown here as a goodwill gesture by El Al Airlines.

The Rock was formally presented on May 18, 1986, by Ambassador Meir Rosenne as a gift to the people of Bethesda, Maryland, from the State and the people of Israel. The Rock of Bethesda was displayed at County libraries during the summer while a permanent location was arranged.

Suburban Hospital was chosen as the permanent location because it is a county facility located in Bethesda, open at all times, and dedicated to health and healing. Locating the Rock at Suburban Hospital serves as a permanent reminder of the spiritual aspects of health and the bond between all peoples.

The rock was initially located in the hospital's south wing in a free standing display donated by Bethesda Row Shopping Centers in memory of Charles F. and Laura P. Miller. The rock was moved to its new location in the main lobby on the hospital's 50th anniversary. The Rock of Bethesda also serves as a reminder that a time capsule depicting Suburban Hospital at its 50th anniversary is enclosed in the base of the rock's new display.