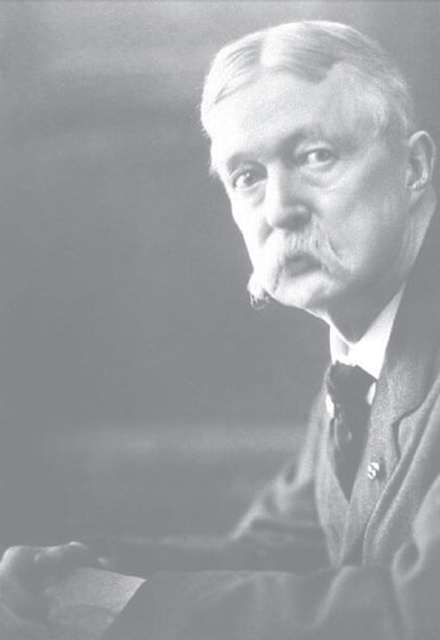 The intellectual architect of The Johns Hopkins Hospital was John Shaw Billings (1838 – 1913), a battlefield surgeon in the Civil War, a creator of a monumental bibliography of the world's medical literature, a pioneer in public hygiene and sanitation, an expert in hospital construction and management, and the first director of the New York Public Library.

This multitalented and vastly accomplished man, almost single-handedly, designed almost all of The Johns Hopkins Hospital and figured out how a medical school could operate within it. According to Frank Bradway Rogers, former director of the National Library of Medicine, which Billings transformed into the world's best medical library, "He had organizing genius and a passion for doing. Vision he had, managerial adroitness and a dogged and relentless power of will."

But despite his prodigious achievements, Billings himself was an enigma. Some considered him arrogant and abrasive, describing an obsessive, rather tactless man with a high-pitched, irritating voice and very few close friends. Others say Billings was simple, modest and unassuming, despite the fact that he once tried, unsuccessfully, to persuade a British acquaintance to submit his name for membership in the Royal Society.

Whatever the case, Billings’ name seldom comes up in the hospital’s lore as does those of the popular “Big Four:” founding physicians Welch, Osler, Halsted and Kelly. Yet, in the early 1970s the domed, central Administration Building was renamed after Billings.. It was a fitting memorial, since Billings laboriously laid out plans for the landmark building in the late 1870s, after spending months in Europe studying hospital design.

As a battleground surgeon during the Civil War, Billings earned his reputation as an organizer by moving whole field hospitals, revising the Union Army's ambulance corps and keeping statistics on battle injuries.

He was appalled by the way wounded soldiers were typically treated. He pointed out that surgical treatment without adequate nutrition endangered patients, and objected to what he saw as his colleagues’ overuse of amputation and surgical bullet removal, which Billings thought could lead to more infection.

Billings and The Johns Hopkins Hospital

The Hopkins Hospital trustees eventually turned to Billings when considering ideas for construction, heating, ventilation and administration of the proposed hospital.

He came up with a plan, but admitted he wasn't entirely happy with it. The trustees sent him to Europe to get advice from administrators of the more respected European hospitals on how to improve his ideas.

Unhappily married and with no known hobbies, Billings enjoyed travel and made 16 trips abroad in his lifetime. While in Europe, Billings met with university professors and hospital experts who provided more ideas for designing an innovative hospital.

Inspired, Billings roughed out a revised layout for the hospital. The new plan included prewiring for electricity, even before the hospital generated its own electricity and long before power was extended to the hospital site.

“For the Benefit of the Sick and Afflicted…”

The buildings were not his only concern – he also cared about what happened inside of them. Billings was the first to suggest a four-year medical school program, with no more than 25 students to a class. He favored stringent entrance requirements, tough tests that would eliminate wasting "time and labor on men not fitted to receive the kind of instruction which we propose to give."

He also advocated practical work in the hospital. Billings was the one who pressed university President Daniel Coit Gilman to hire William Henry Welch, betting that the young pathologist would mature into a natural leader. In fact, after Johns Hopkins himself, Billings is probably the single most critical player in giving shape to a novel idea for revolutionizing American medicine.

In a 10-page letter to the hospital trustees, he urged this role for Johns Hopkins:

"This hospital should advance our knowledge of the causes, symptoms and pathology of disease, and methods of treatment, so that its good work shall not be confined to the city of Baltimore or the state of Maryland, but shall in part consist in furnishing more knowledge of disease and more power to control it, for the benefit of the sick and afflicted of all countries of all future time."

The hospital trustees asked Billings to take on the job of first hospital superintendent, but having shepherded the hospital from the drawing board to its opening 12 years later, Billings declined the offer, and his official connection with the hospital ended in 1889.

Billings returned to the Surgeon General's office, from which he retired as lieutenant colonel in 1895. Then he oversaw the combination of the Tilden Trust and the Astor and Lenox Libraries into the New York Public Library, and served as its first director until he died in 1913.