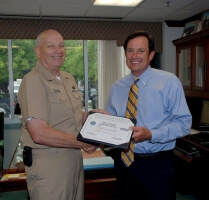 Donna Sasenick, RN, who works as an Emergency Management Specialist at Suburban Hospital and who also serves as a Lieutenant Commander in the Nurse Corps of the United States Naval Reserves, nominated Gragnolati.  During her eight years at Suburban, she has been called to duty several times, including three years of consecutive orders.  She is currently in the midst of a one year set of orders with the Bureau of Medicine and Surgery.

“It is important for our hospital’s leadership to be recognized for their efforts,” Saesnick said.  “Brian Gragnolati supports the military both from a staff perspective as well as through Suburban’s alliances with the National Naval Medical Center, the National Institutes of Health Clinical Center, and National Library of Medicine in the Bethesda Hospital’s Emergency Preparedness Partnership.”

Sasenick went on to say that members of the military are made to feel welcome and quickly integrated into their jobs when they return back to Suburban Hospital after a military absence.  She added, “It is important to recognize the work that hospital leadership does in support of policies that allow reservists to balance competing priorities.  It is this effort that keeps us retained as employees.”

About Suburban Hospital
Suburban Hospital, a member of Johns Hopkins Medicine, is a not-for-profit, community-based hospital in Bethesda, Maryland, that has served Montgomery County and the surrounding area for more than 65 years. Suburban Hospital is distinguished by a cutting-edge stroke program; level II trauma center; centers of excellence in cardiac care, orthopedics and joint replacement surgery, neurosciences and oncology; state-of-the-art diagnostic and treatment tools; and affiliations with world-class institutions, including the neighboring National Institutes of Health.