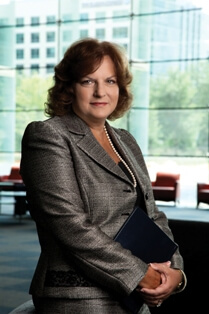 Age 50. Communications vice president at a local corporation. Mother of three. Hobbies: anything water-related, including boating, fishing and swimming.

All Alyce Sarno had to do was turn her head a certain way and pain would shoot from the back of her neck to her arm. Sometimes her arm would go completely numb. It began three years ago and she was able to manage the pain conservatively for much of that time. The pain finally increased to the point where Sarno could not sleep or function normally. In her position she had to be at the top of her game every day. It was time to look for other options.

She was referred to Dr. Khanna by Dr. Chandrashekar Kalmat of the Pain Management Institute in Bethesda. Sarno’s MRI showed severe stenosis in the cervical spine (neck). “Bone spurs and disc protrusions at the C5-6 and C6-7 levels in Ms. Sarno’s neck were pressing on her nerves and spinal cord causing the numbness, pain and weakness in her left arm,” says Dr. Khanna. Given the progression of Sarno’s arm pain and weakness Dr. Khanna felt that it would be best to proceed with surgery. “With the help of an operating microscope, we performed anterior cervical decompression and fusion (ACDF), which allows us to take the pressure off of the cervical spine nerve roots and spinal cord and stabilize the area,” he explains. Though not considered a new minimally invasive procedure, Khanna says the ACDF is a procedure that has always been performed through a small incision and has an excellent track record.

Sarno spent one night in the hospital after surgery and went back to work five weeks later. She has resumed all activity, and has more energy to concentrate fully at work now that the pain is gone. Her only regret? “I should have had surgery sooner.”

To see a video simulation of the procedure, click here.