Recent findings
How we did it
Our Publications

Some patients note a strange set of symptoms: Loud noises cause them to suffer sudden vertigo and blurred vision. Their hearing for internal noises (like a heartbeat and the grating of knee joints) is much better than normal. Until recently, these complaints were often considered psychosomatic.

One of the early achievements of our lab was defining a particular balance disorder that had never been described before, a discovery that took place in 1995. After assembling a range of clues, we determined that the condition, which involves a tear in the uppermost canal of the vestibule of the inner ear, occurs because the bony surface of the canal never grew to proper thickness during development. We named the condition superior canal dehiscence syndrome (a “dehiscence” is a hole). Then, we took our findings a step further and established a treatment for patients who suffer from the condition.

Our lab has made great strides in improving the treatment of another balance disorder known as Ménière’s disease, which affects as many as 5,000,000 people worldwide. As of today, no one knows why people with Ménière’s disease accumulate fluid in the inner ear, but the effects are clear: fluctuating hearing loss, lack of balance and periods of terrible vertigo.

Many patients with Ménière’s disease are treated with dietary changes and diuretics to eliminate excess fluid, but that therapy doesn’t work for all patients. Endolymphatic sac surgery was offered by many centers, but results have been inconsistent. In extreme cases, surgery to cut the vestibular nerve or remove the vestibular part of inner ear solves the problem, but at the cost of major surgery and a chance or certainty of hearing loss.

Several years ago, doctors realized that gentamicin, an antibiotic commonly used for systemic infections has the side effect of knocking the vestibular structure out of commission by damaging hair cells.

Although gentamicin toxicity can itself be a cause of vestibular disorders, hearing loss and vertigo, this drug can be used to effectively and safely treat Meniere’s disease. Key to this concept is that the vertigo of intractable Meniere’s is due to fluctuation in vestibular function in the affected ear. By reducing or destroying residual vestibular hair cell function, gentamicin Adapted for use in treating Meniere’s disease, the medication is give by small injection directly into the ear. Though the treatment worked well to eliminate the debilitating spells of dizziness, it had the drawback of causing hearing loss in ten percent of patients.

Through work in the lab, our team has improved that treatment, known as intratympanic gentamicin, by determining that a lower dose of the drug can also be effective. In more than 100 patients we’ve treated during the last eight years with the low-dose version of the therapy, we’ve seen vertigo cured 90 percent of the time, results that equal the effectiveness of surgery. Most importantly, the incidence of hearing loss has been reduced substantially.

The diagram above shows the structures of the inner ear. The inner ear balance organs consist of three semicircular canals (the horizontal, posterior, and superior canals) that are located at roughly right angles to one another. These balance canals give the brain information related to the angular motion of the head. They function somewhat like a gyroscope in an airplane. The otolith organs (utriculus and sacculus) are the other balance organs in the inner ear. They give the brain information related to linear movements of the head and to the orientation of the head relative to gravity.

We have identified a syndrome in which vertigo and imbalance are triggered by loud noises or pressure in the affected ear. These symptoms are due to an opening in the bone overlying one of the inner ear balance canals. We believe that such an opening may result from congenital problem in the development of the inner ear, from certain infectious diseases, and/or from trauma. While this syndrome has only recently been identified, our studies of past records and of temporal bones (the bones containing the inner ear hearing and balance organs) indicate that the syndrome has been present, but not specifically identified in the past.

This syndrome produces some very specific symptoms. Patients can experience vertigo (an illusion of motion) caused by noises or pressure in the ear. The noises that can provoke such symptoms include loud music, being in a noisy environment such as a sports event, sounds on the telephone such as the dial tone or a busy signal, and sounds made by the patient such as singing at certain pitches. The pressure symptoms that can provoke the symptoms include pushing on the outer aspect of the ear, blowing through the nose while pinching the nostrils, and straining while lifting heavy objects. In addition to these symptoms that occur in specific association with the stimuli just described, patients with this syndrome may experience a generalized and more constant sense of disequilibrium and unsteadiness. 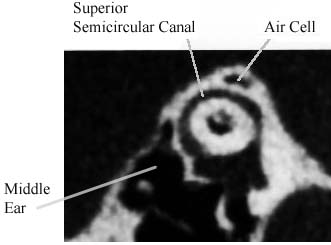 CT image in the plane of the superior semicircular canal of a normal patient. Note that bone covers the circumference of the canal. An air cell is visualized in this bone.

The syndrome we have identified is due to an opening in the bone overlying the superior semicircular canal. A diagram of the eye movements that can be induced by sound or pressure in the affected ear of a patient with this disorder is shown below.

The eye movements that are induced by sound and/or pressure in the affected ear(s) of these patients are "to-and-fro" eye movements termed nystagmus. Such eye movements are made up of slow and fast components. 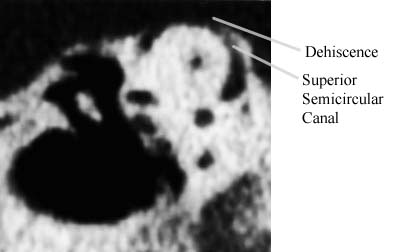 CT image in the plane of the superior semicircular canal of a patient with dehiscence of bone overlying this canal.

The diagram on the right shows the direction of the slow components of the eye movements evoked by loud sounds in the right ear of a patient with an opening in the superior semicircular canal on that side. Note that the eyes movement upward and away from the stimulated ear. The fast components of the evoked eye movements are in the same plane but in the opposite direction.

These eye movements can be observed during clinical testing by administering tones over the frequency range of 500 – 2000 Hz with intensities of 100 – 110 dB. Similar eye movements can, in some cases, also be seen with pressure on the external ear or with blowing the nose while pinching the nostrils. The eye movements are best observed when the patient is wearing Frenzel lenses (20x magnifying lenses that enlarge the image of the eyes for the examiner but which blur vision for the patient and thereby prevent the nystagmus from being suppressed by looking at an object).

Diagram of eye movements evoked by loud sound in the right ear of a patient with an opening in the bone overlying the superior semicircular canal. The eyes move up and away from the affected ear.

Suggestions if you think you are experiencing symptoms similar to those described above:

See your physician. He or she will be able to perform some simple screening tests in the office to determine if a further evaluation is warranted. You can take this information sheet with you when you see your doctor. Imaging studies such as a high-resolution CT scan of the temporal bones may also be useful.

A detailed description of the symptoms and findings in the first eight patients in whom we identified this syndrome along with description of a possible surgical treatment will be published in the March 1998 edition of Archives of Otolaryngology—Head and Neck Surgery (Minor, Solomon, Zinreich, and Zee: "Sound- and/or pressure-evoked vertigo in patients with bone dehiscence of the superior semicircular canal"). 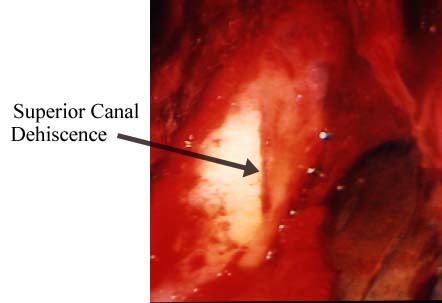 Operative photograph of the floor of the left middle cranial fossa in a patient with superior canal dehiscence.

How We Did It

It all began with the patients we were seeing in clinic. As physicians in the Department of Otolaryngology—Head and Neck Surgery, we’d seen two patients who were suffering from the same bizarre symptom: at the sound of a loud noise everything in the room would appear to jump up and down. These patients also described feeling dizzy and often terribly nauseated. It was clear that the sensations of dizziness were closely connected to the reflex that links the eye and the inner ear, known as the vestibular-ocular reflex.
We recalled that a century-old study in pigeons linked certain eye movements with damage to particular canals of the inner ear. We monitored the eye twitches of the two patients and took the problem back to the lab. Our team compared CT scans of the patients’ vestibular structures and added evidence gathered from 1,000 slides made from preserved bones of the inner ear. What we realized was that we were looking at a balance disorder caused by holes in the uppermost canal of the vestibular structure, the loop known as the superior canal.

From the evidence we’d gathered, we determined that we were looking at a congenital condition of underdeveloped vestibular bone on the uppermost canal of the inner ear. A blow to the head or a violent bout of coughing can tear the fragile tissue and produce the distressing symptoms. In some people the thin bone over the superior canal may erode over time due to the pressure of the brain. We have detected the condition in more than 40 patients and have been informed of at least 100 others around the world who suffer from it.
The research led us right back to improving patient care: We developed an operation for superior canal dehiscence syndrome that repairs the hole in the bone. (*cartoon and intraop images of SCD reqair) We’ve now performed the operation on more than ten patients, resolving their symptoms of vertigo and enabling them to return to their active lives.

For more information about superior canal dehiscence syndrome, go to for our patients getting the correct diagnosis, and treatment.

Clendaniel, R.A., Lasker, D.M., and Minor, L.B. (2002). Differentialadaptation of linear and nonlinear components of the horizontal vestibuloocular reflex in squirrel monkeys. Accepted for publication in Journal of Neurophysiology, in press.

Armand, M., and Minor, L.B. (2001). Relationship Between Time- and Frequency-Domain Analyses of Angular Head Movements in the Squirrel Monkey. Journal of Computational Neuroscience, 11:217-239.

Backous, D.D., Minor, L.B., and Nager, G.T. (1999). Relationship of the utriculus and sacculus to the stapes footplate: Anatomic implications for sound-and/or pressure-induced otolith activations. Annals of Otology, Rhinology, and Laryngology 108: 548-553.

Minor, L.B. (1994). Controversies in the management of glomus tumors of the temporal bone. Operative Techniques in Otolaryngology, Head and Neck Surgery 5: 189-202.

Minor, L.B. and Goldberg, J.M. (1991). Vestibular-nerve inputs to the vestibulo-ocular reflex.: A functional-ablation study in the squirrel monkey. Journal of Neuroscience 11: 1636-1648.