Recent results and ongoing clinical trials at Johns Hopkins suggest that pancreatic cancer’s nonimmunogenic status may not be set in stone: A cancer vaccine developed at Johns Hopkins appears to switch these tumors into immunogenic foci, opening the door for checkpoint inhibitors and other types of immunotherapies.

Since the first of this class of immunotherapy drugs was approved in 2011, checkpoint inhibitors have shown significant promise in providing long-term survival for up to 30 percent of patients with advanced melanoma; head and neck, lung, kidney, and bladder cancers; and Hodgkin’s lymphoma in clinical trials. However, some nonimmunogenic cancer types don’t appear to respond to these drugs—notably pancreatic cancer, a disease whose five-year survival rate has hovered around 5 percent for decades despite concentrated research efforts.

Looking for a way to make these non-immunogenic tumors immunoresponsive, medical oncologists Elizabeth Jaffee and Lei Zheng, along with pancreatic surgeon Christopher Wolfgang and colleagues, performed a clinical trial between 2008 and 2012 involving 39 pancreatic cancer patients.

“Being able to convert these nonresponsive tumors to immunogenic entities may eventually be able to provide the precision systemic therapies we need to cure these patients,” says Wolfgang, who is the director of hepatobilliary and pancreatic surgery at The Johns Hopkins Hospital.

Two weeks before these clinical-trial patients had surgery to resect their tumors through the Whipple procedure, they all received a dose of pancreatic GVAX—a cancer vaccine specific to malignant pancreatic tumors that was developed by Jaffee and her colleagues. Some of these patients also received either a single intravenous dose or multiple oral doses of cyclophosphamide, an immunosuppressive drug meant to deplete patients’ supply of regulatory T-cells (Tregs), immune cells that dampen the body’s native anticancer immune response.

After these patients’ tumors were removed, the researchers examined each one’s microenvironment to see how GVAX and cyclophosphamide might have changed it compared with tumors from other patients who didn’t receive these treatments. Wolfgang, Zheng, and their colleagues made a surprising discovery: In 33 of the 39 GVAX-treated patients, regardless of cyclophosphamide treatment, they found intratumoral tertiary lymphoid aggregates—essentially regulatory structures of adaptive immunity. Rather than being random groupings of lymphocytes, these clusters were organized into actively proliferating T- and B-cell zones.

Further investigation into the genetic regulation of these tertiary lymphoid aggregates showed a clear uptick in the activity of five signaling pathways involved in regulating immune-cell activation and trafficking. This increased activity was associated with a better post-vaccination response, leading to a higher density of the aggregates. In turn, says Zheng, having more tertiary lymphoid aggregates was associated with better long-term survival.

GVAX also appeared to favorably alter the ratio between cancer-fighting effector T-cells (Teffs) and immune-dampening Tregs. Heavier ratios of Teffs to Tregs are typically seen in immunogenic cancers such as renal call carcinoma and melanoma. Together, these results—reported in the July 2014 Cancer Immunology Research—suggest that these nonimmunogenic pancreatic tumors had been converted to immunogenic tumors that might respond to other immunotherapies.

That’s what Zheng and his colleagues are testing now. Ongoing clinical trials at Johns Hopkins are evaluating combining pancreatic GVAX with the checkpoint inhibitors Nivolumab or Pembrolizumab.

However, Zheng notes, it’s already clear that this combination therapy will need further additions to dramatically extend long-term survival and to eventually develop a cure. “Vaccine therapy in combination with checkpoint inhibitors is still not sufficient,” he says. “We need to do more thorough analyses on specimens obtained from surgery on patients who have received these therapies and attempt to identify additional targets for immunotherapy on individual patients. The goal is to design personalized immunotherapy for pancreatic cancer patients. Dr. Wolfgang and I are leading one of Johns Hopkins Medicine’s Center of Excellence Programs, focused on pancreatic cancer and precision medicine. We believe such a program will accelerate the development of personalized immunotherapy.”

To refer a patient to our Pancreatic Cancer Multidisciplinary Center, call 410-933-PANC (7262)

“Being able to convert these nonresponsive tumors to immunogenic entities may eventually be able to provide the precision systemic therapies we need to cure these patients.”

The Future of Pancreatic Cancer Immunotherapy

Since joining the Johns Hopkins faculty in 1992, Elizabeth Jaffee, deputy director of the Johns Hopkins Kimmel Cancer Center, has made a number of advances in this field. These include the pancreatic cancer-specific vaccine GVAX, which primes effector T-cells to fight against pancreatic cancer cells. With the recent FDA approval of checkpoint inhibitors, which take the “brakes” off of immune-dampening pathways that cancer cells use to defend themselves, Jaffee says, immunotherapies hold incredible promise to finally extend long-term survival for this disease.

However, Jaffee notes, her work has revealed that it may not be enough to remove one or two of these immune-dampening brakes. “The problem is, we’re realizing that there might be 15 or more different kinds of brakes,” she says, suggesting that taking aim at multiple cancer checkpoints will be necessary. Additionally, although off-the-shelf GVAX is helpful at stimulating an immune response, research in her lab is showing that vaccines targeting proteins specific to each patient’s tumors could be significantly more effective.

Her long-term dream, she says, is for researchers to eventually develop a vaccine universal to all cancers that can thwart this disease from ever getting a foothold. “Someday,” Jaffee says, “we might be able to vaccinate people early in life and prevent cancer overall."

The image below shows staining of tumor and tumor infiltrating immune cells in the surgically resected pancreatic cancer following the preoperative treatment of vaccine-based immunotherapy. 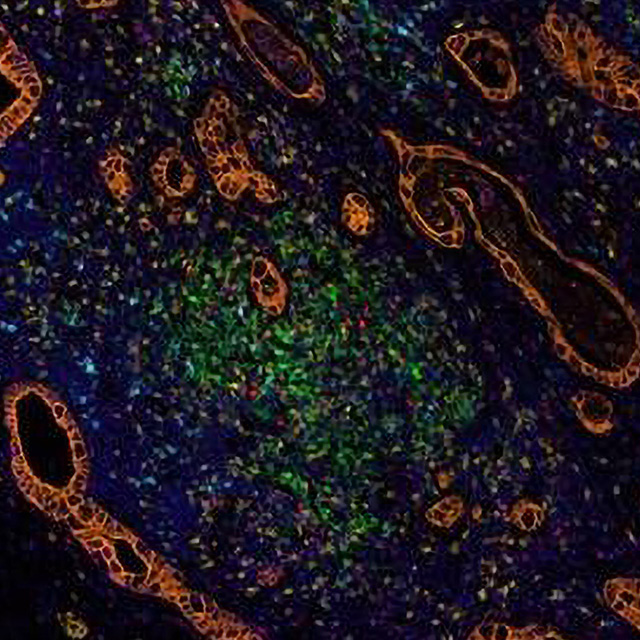