While many Americans are familiar with the terms high or low cholesterol, the terms are grossly oversimplified, says cardiologist Steven Jones, M.D. The equation widely used since the 1970s to calculate low-density lipoprotein (LDL, or “bad”) cholesterol often underestimates LDL for patients at high risk for heart attack and stroke. To more accurately pinpoint patients’ cholesterol or lipid disorders, Jones and colleague Seth Martin, M.D., M.H.S., developed a highly precise algorithm to calculate LDL cholesterol. The research that led to this discovery, and related work, has been funded by the David and June Trone Family Foundation.

“What we’re trying to do is completely change the landscape of how physicians think about these disorders, and go from this cholesterol concept to asking about specific lipoprotein disorders” such as high levels of fatty molecules called triglycerides, Jones says. Doing so can lead to more precise, targeted therapy of patients’ individual disorders versus treating cholesterol more generically, he says.

Through the Very Large Database of Lipoproteins (VLDL), a project begun in 2009, Jones and Martin have been analyzing data from millions of patients with cholesterol disorders whose blood samples have been tested by Alabama-based VAP Diagnostics Lab. As a result of their analyses, they devised the Johns Hopkins LDL cholesterol calculator, which has been found to be more accurate than the widely used Friedewald formula. “The standard formula that has been used for decades to calculate LDL cholesterol often underestimates LDL where accuracy matters most—in the range considered desirable for patients at high risk for heart attack and stroke,” says Martin.

The novel Johns Hopkins calculator has been adopted by several foreign countries and Quest Diagnostics, the largest U.S. provider of clinical laboratory services.

“It’s a unique combination of using big data to attack our cardiovascular risk,” says David Trone, of Potomac, Maryland. “We felt like it was an excellent opportunity to help get some exciting research off the ground that had ramifications for a very large group of people.”

Trone, a cardiology patient at Johns Hopkins for the past 15 years and founder and co-owner of Total Wine & More liquor stores, has supported the work with a series of major gifts through the David and June Trone Family Foundation totaling $1.7 million. “We’re trying to focus on long-term medical research, which often in today’s short-term world gets shortchanged,” Trone says.

With the Trones’ support, Jones and Martin have published multiple studies demonstrating the relationship between cholesterol, triglyceride and lipoprotein measures, and their association with markers of cardiovascular risks. They also have studied large numbers of patients with relatively rare cholesterol disorders. In ongoing work, they are matching National Death Index data to VLDL patients to better understand the association of cholesterol disorders with illness and death. “Our research is directed toward high-impact, clinically relevant questions to influence guidelines for the treatment of lipoprotein disorders,” says Jones. “The Trone Foundation support allows us to continue our mission.” 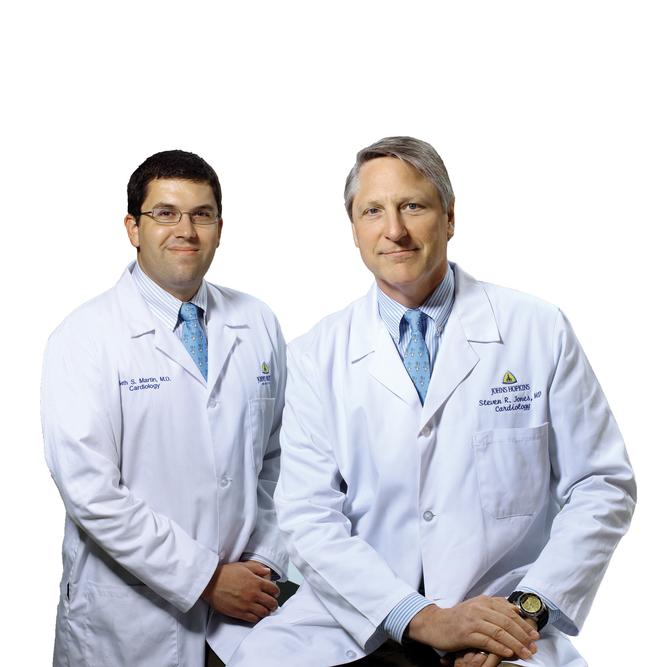 Seth Martin and Steven Jones
back to top button