In his office at The Johns Hopkins Hospital, pathologist Timothy Amukele uses Google Earth to scan the flat, rural landscape of Kenya’s Nzoia district. His computer screen shows a patchwork of green farms and a rutted brown road. From previous Skype and email conversations with health officials in Africa, Amukele knows this region is dotted with 40 health clinics. But it has just one diagnostic laboratory capable of testing blood for HIV, tuberculosis, diabetes, pregnancy and other conditions.

The clinic workers who draw blood from patients send samples to that lab by commercial buses, which travel as far as 30 miles over bumpy roads that can break down the cells of the blood, making analysis impossible.

“The district director tells me a lot of times the samples are not useful or never arrive,” says Amukele, who spends about one-third of each year in Africa, studying the number and quality of diagnostic labs.

The Johns Hopkins pathologist wants to create a courier system with dozens of unmanned aerial vehicles (UAVs), popularly known as drones, to transport blood samples in Nzoia. He has already purchased a couple of UAVs online and packed them with vials of blood from local volunteers. During test flights in the Baltimore area, the samples remained intact.

Now Amukele is getting help from people who can automate drones and map out efficient transportation patterns of routes and hubs. He found these experts at a recent “speed dating for research” event that introduced pathologists in the school of medicine to engineers and scientists at the Applied Physics Laboratory (APL).

Part of a Johns Hopkins University push called One University, which encourages research and interactions across Johns Hopkins schools, the speed-dating program orchestrated one-on-one conversations between potential scientific partners. Everyone had three minutes to talk about their research interests and three minutes to listen, before switching seats to meet someone new.

A few days later, Amukele drove to APL’s Laurel headquarters, where he met with five UAV engineers. Amukele knew little about UAVs, and the APL staffers knew even less about blood tests in low-resource settings. But once they were in the same room, ideas flew. The engineers would focus on creating a UAV system to meet Amukele’s requirements for simple operation and collision-free, accurate flight. Amukele  would travel to the region to learn more about its landscape and diagnostic needs.

The team is one of several formed through speed dating that applied for a Discovery Award grant, a new funding program from the Office of the Provost that rewards projects led by investigators from more than one school.

Speed dating for research was brought to Johns Hopkins by Ralph Hruban, interim director of pathology, and Denis Wirtz, vice provost for research, who has appointments in engineering, pathology and oncology. Inspired by a similar program at the University of Wisconsin, Hruban and Wirtz began in January with a matchmaking event between pathology and the Whiting School of Engineering. (Additional speed-dating sessions are not yet scheduled, says Hruban.)

Both matchups were held in Turner Auditorium and attracted about 25 people from each participating school. Faculty members were awkward at first, folding their arms and sticking with others in their own schools, Hruban says. But once the speed dating began, they grew enthusiastic about contributing to projects outside their fields.

“It’s always hard to get out of your comfort zone,” says Wirtz. “We had to physically meet, not just email, so we could see for ourselves, ‘This is someone I can work with.’”

At the event with the engineering school, pathologist Aaron Tobian discussed his research showing that circumcision of adult men in Africa can reduce their HIV risk by 60 percent. He also explained to potential collaborators that no existing technique or device is perfect for a procedure that many men are reluctant to undergo. Surgery is resource-intensive because it requires anesthesia, a sterile setting and skilled clinicians. Devices that block blood flow to the foreskin, causing it to fall off, have been linked to fatal infections.

Tobian is now working with Youseph Yazdi, executive director of the Johns Hopkins Center for Bioengineering Innovation and Design. They are analyzing current devices and procedures to “really understand what the weaknesses are with existing solutions,” Yazdi says, before launching a project to design and develop something better.

At least one pathologist was surprised to find a kindred spirit in a Johns Hopkins research center devoted to national security. “I didn’t know there was a big genomics group at APL,” says Kathy Burns, a pathologist now working with Christopher Bradburne, an APL scientist with a doctorate in genomics.

They are combining Bradburne’s study of the genes encoding an enzyme that regulates drug metabolism with Burns’ insights on the replicating sequences in genes known as “junk DNA.” Together, they hope to gain a better understanding of how individuals react to medications, ultimately improving dosage recommendations.

Speed dating also connected pathologist Matthew Olson with David Silberberg, an APL data scientist who is repurposing his group’s algorithms to help Olson measure cancer risk. “He’s looking for behaviors, and I’m looking for cancer patients, but the tools are the same,” says Olson. “We can use the same software to look for patterns in people who do and do not have thyroid cancer.”

Happy as he is with his current match, Olson has no intention of settling down with just one research partner. “I have every business card I got that night,” the pathologist says. “I could see a potential for collaboration with everyone I met.”

“This program made me think outside the box. I was thinking about what would be interesting to engineers.” 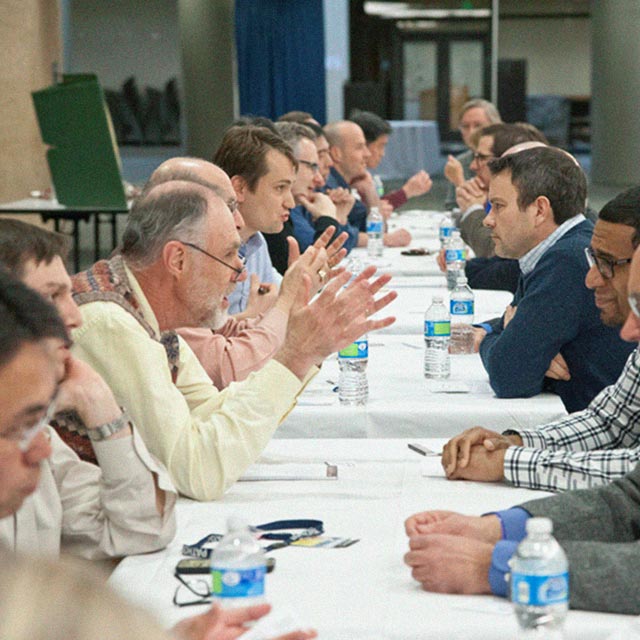 Speed-dating participants from the Department of Pathology and the Applied Physics Laboratory describe their work to potential collaborators.
back to top button