Between shifts, staffers slept on cots and played in the snow. As the drifts piled up and the region came to a standstill, the hospitals bustled. From Friday afternoon to Sunday night, 60 babies were delivered, 73 surgeries were performed and many memories were made.

Shelter from the Storm

When the weather turned deadly, Baltimore’s homeless, mentally ill and addicted made their way through blinding snow to The Johns Hopkins Hospital’s Emergency Department.

“Typically we treat a lot of homeless patients, but these were the ones we don’t normally see, the ones who came in as their last resort,” says Amy Cammer, nurse case manager in the Emergency Department.

Cammer and Emergency Department social worker Juanita Maye made sure patients had a place to go after treatment. “Amy and I worked together the entire time,” says Maye. They contacted the mayor’s office to find space for the patients, then tapped the National Guard for transportation.

The homeless were men and women of all ages, including two preteen children. Many were experiencing substance withdrawal. One man refused shelter, though he accepted food and let doctors treat a wound on his leg.

Cammer, who arrived at the hospital at 8 on Saturday morning, estimates she helped more than 20 people find places to stay by the time she left 51 hours later.

Truckin’ in from Timonium

On Sunday night of the blizzard, Rolita West texted her supervisor that there was no way she could leave her apartment complex in Timonium. From her living room window, the Johns Hopkins Hospital social worker couldn’t even see her car in the unplowed parking lot. Her heart was heavy. West knew that her patients at the Moore Clinic couldn’t miss a day of treatment. “I knew that even if the clinic closed, many would come in and pick up their drugs at the pharmacy,” she says. “And these patients almost always need help dealing with insurance and copays.”

Frustrated, West enlisted the help of her sister, a truck driver from Kansas City, Missouri, who had extended her Christmas stay in Baltimore. Her 18-wheeler was parked a few blocks away on a cleared street. Together they trudged through the snow and began what would turn into a treacherous two-hour trip—down I-83 south and up Monument Street, to The Johns Hopkins Hospital.

Only 10 of the clinic’s 50 staffers made it to work that day. West’s supervisor, senior clinical social worker Anne Harper, was not surprised to see her. “Rolita is well-loved by staff members and patients, and always demonstrates a strong commitment,” Harper says. For West, the payoff came when a patient spotted her, smiled and exclaimed, “I’m so glad you’re here because I need my medicine!”

Scenes from the Snow 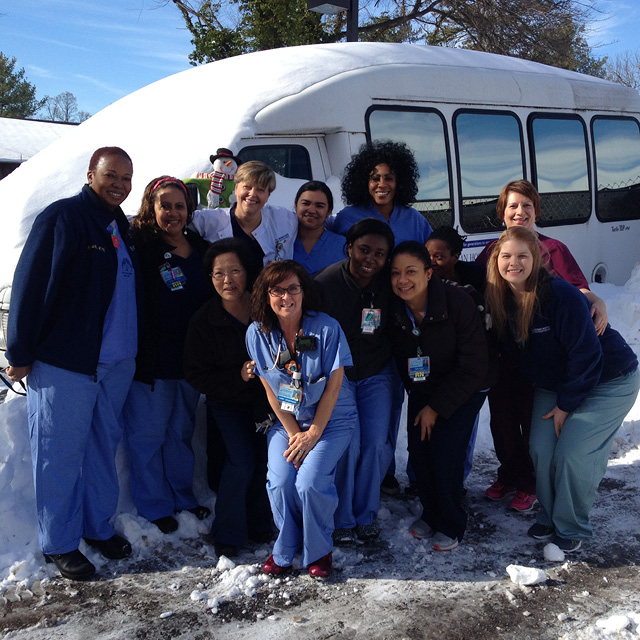 Staying home was not an option for Stephanie Machiran, who lives more than 30 miles from Suburban Hospital. She had to be at work by 7 on Sunday morning to begin her shift as an Emergency Department charge nurse.

Jason Giza, the husband of fellow nurse Taryn Giza, offered to drive Machiran to the hospital. But she’d have to meet him at a main road, a steeply inclined quarter-mile from her Mt. Airy home. Machiran and her husband, Jonny, stepped into the clear post-storm night at 3:30 a.m. In the dark, Jonny walked ahead of his wife, shoveling a path through waist-high snow so she could walk in his footsteps.

“It took us 45 minutes to walk a quarter-mile, but we made it,” says Stephanie, who arrived at the hospital on time and stayed through Monday night.

Stephanie Machiran
back to top button