On Jan. 28, the Dana Center for Preventive Ophthalmology hosted a webinar featuring Megan Collins about the impact of the Vision for Baltimore program. The Dana Center is a multidisciplinary coalition of faculty, staff and students dedicated to the prevention of avoidable vision loss through research and education. Collins is a pediatric ophthalmologist at the Johns Hopkins Wilmer Eye Institute, Johns Hopkins Medicine and co-founder of the Johns Hopkins Consortium for School-Based Health Solutions. She leads the Vision for Baltimore program.

Launched in 2016, Vision for Baltimore is a collaborative partnership between The Johns Hopkins University, the Baltimore City Health Department, the Baltimore City Public Schools system, the optometric provider Vision To Learn and the eyewear retailer Warby Parker. The program provides vision screenings and, if needed, eye exams and glasses — all within the school setting.

The model aims to address gaps in access to pediatric vision care, particularly for students in disadvantaged communities. As Collins explains, when children can’t see, it’s usually because they need glasses. In fact, roughly 25% of children — 1 in 4 — need glasses, but in high-poverty areas across the U.S., as few as 5% of kids who need glasses may actually have them. The reasons for this are complex.

“While most states have a mandate that students in certain grades undergo vision screenings, a screening only detects someone who might have an eye problem. To find out if they actually have an eye problem, they have to go to the eye doctor for an eye exam,” Collins says. “If they’re prescribed glasses, they then need to go somewhere else to get that prescription filled, and if the glasses get lost or broken — which we know they sometimes do — they need to go back to the optical shop to get new glasses.”

Some students who need glasses are struggling in school, a finding documented by Collins and her colleagues in the Johns Hopkins University School of Education through the Baltimore Reading and Eye Disease Study. “There are millions of kids in schools across the U.S. who not only can’t see clearly, but may be struggling in school because of it,” says Collins.

That’s where the concept of school-based vision care comes in. Usually — in the pre-COVID world, anyway — kids are in school nine months of the year for seven hours a day, making it a logical place to deliver vision care. Vision for Baltimore serves students in pre-kindergarten through eighth grade in Baltimore City Public Schools. That’s roughly 60,000 students in 150 schools, visited over a three-year cycle. In any given year, the program serves students in about 50 schools. 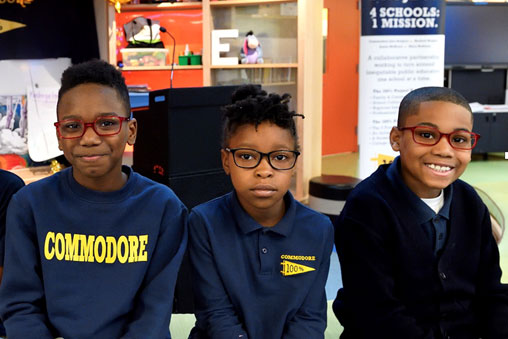 The program brings all the necessary components to the schools, from Health Department screeners who do the vision screenings, to the Vision To Learn team that conducts the eye exams, to the glasses themselves, which students pick out from a selection in a mobile vision clinic. Then, once the glasses are made, Vision for Baltimore brings them back to school and fits them on the students’ faces, where, Collins says, they’ll have the biggest impact on their learning. To date, Vision for Baltimore has screened almost 65,000 students across the city, completed 11,000 eye exams and provided nearly 8,000 pairs of glasses to students in need.

Maryland mandates vision screening for students in pre-K, kindergarten and grades one and eight, meaning that students in grades two through seven do not undergo mandated screenings. However, Vision for Baltimore performs screenings and exams in all grades, and was able to pick up a substantial number of students in grades two through seven who failed vision screening and needed glasses. Collins says that’s created a lot of interest in expanding to include some of those gap grades.

And what of the impact on academic achievement? Vision for Baltimore has partnered with the school of education on a longitudinal study looking at the academic impact of providing students with glasses. Following students over three years, they’ve been able to demonstrate the positive impact glasses provide on academic achievement — particularly in English language arts. Moreover, Collins says, the students who improved most were those in the lowest quartile of their class at baseline, meaning that the ones struggling the most benefited the most, as did students with individualized education plans.

The next question the team hopes to address is how to serve as many students as possible in order to maximize the program’s impact. They’re also looking at ways to ensure that students wear their glasses as prescribed. Collins believes that education is key to achieving this goal, and outreach to parents and teachers is aimed at creating awareness of when students should be wearing glasses.

Collins says there’s also a real need to facilitate connections for community-based care. “Very few students examined through the program are referred for some eye need other than that they need glasses, but all of them will need their glasses updated long term. All of them will need to see an eye doctor for a dilated eye exam, so it’s more important than ever to figure out how we can develop those connections.”

Going forward, she also stresses the need to continue to advocate for students at both the state and national level and for best practices regarding things like which students should have screenings, insurance reimbursement for screenings, eye exams and glasses — all of which are critical for the ultimate sustainability of programs like Vision for Baltimore. (Currently, the program is able to bill Medicaid for those students who are eligible; the remainder of the program is funded through public and private donations.)

Vision for the Future

While the Vision for Baltimore team is thrilled with the success of the program, Collins says it’s hard not to think about other school districts and cities that would benefit from a similar program. “We have come upon a model that works. We understand what that system is, and what it would take to put this into other places as well,” she says. “What I’d like to see is scaling that to other places, because what we learn could help millions of kids across the country. COVID-19 has exacerbated preexisting health inequities, and programs like this will become even more important in the future to help identify kids and connect them with care — particularly when we are able to demonstrate a positive academic impact.”