Last spring, Johns Hopkins researchers published new evidence refuting the longheld scientific belief that the gut nerve cells we’re born with are the same ones we die with.

In a report published in the journal Proceedings of the National Academy of Sciences, the investigators say the finding has profound implications for the understanding and treatment of disorders and diseases that affect the digestive system.

Pankaj Jay Pasricha, director of the Johns Hopkins Center for Neurogastroenterology, and gastroenterology researcher Subhash Kulkarni led a team that discovered the birth-and-death cycle of the neurons that form the network of millions of nerve cells throughout the digestive tract.

“Scientific dogma believed that gut neurons don’t regenerate and that this ‘brain,’ known as the enteric nervous system, remained relatively static shortly after birth,” Pasricha says. “We now have proof that, not only do they regenerate, but the whole network turns completely over every few weeks in adult animals.”

The enteric nervous system controls and regulates vital gastrointestinal functions such as digestion, immunity and inflammation. After the brain, the digestive tract contains the largest nervous system in the human body.

"The yin and the yang of neuronal loss and birth keeps us going," Kulkarni says.

Pasricha, Kulkarni and their team confined their research to the small intestines of healthy adult mice. Using a variety of techniques, they found proteins associated with neural cell death and were able to observe the loss of neurons. Their work provided irrefutable evidence of ongoing neuronal death due to apoptosis in the adult gut.

This significant rate of nerve cell loss left the research team with the question of how the gut maintains its relatively constant number of neurons.

"There could be only one answer," says Kulkarni. "The high turnover of neurons in the gut could only be reconciled by birth of newborn neurons, or neurogenesis."

Despite years of research, proof of neurogenesis in the healthy digestive system has been elusive. Scientists knew that the numbers of enteric neurons in a healthy small intestine remain remarkably constant for most of the adult life. While previous studies have shown that the adult gut contains cells that can generate neurons in lab settings outside of living organisms, finding whether such cells truly give birth to neurons in healthy adult animals eluded scientists for years.

“We now have proof that, not only do they regenerate, but the whole network turns completely over every few weeks in adult animals”

Network of Neural Precursor Cells
In this sample taken from a mouse small intestine, a network of neural precursor cells is highlighted in green. Johns Hopkins researchers have discovered that these stem-like precursors constantly generate nerve cells. The gut’s blood vessels are highlighted in blue and the cell nuclei are gray. Every day, the researchers say, the gut loses and regenerates about five percent of its nerve cells. Over the course of a few weeks, the whole enteric nerve system turns over. 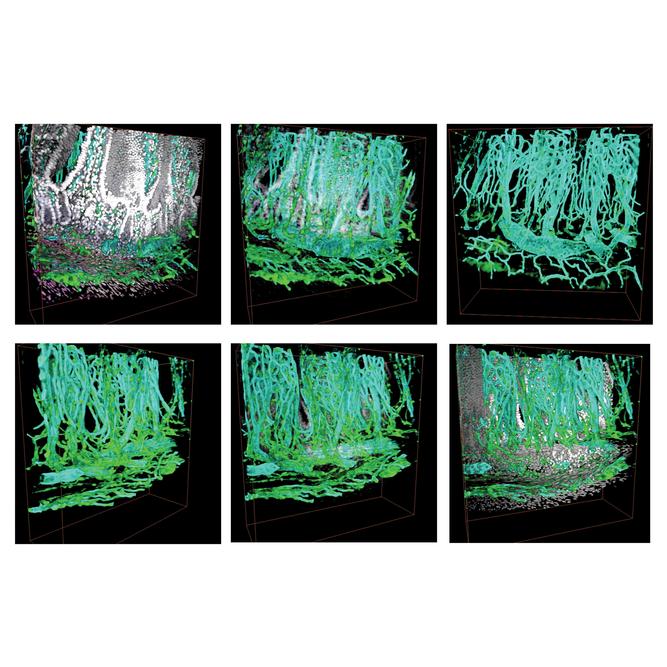