After tapping on the door, Anila Chaudhary stepped into the exam room, ready to take a patient history. Ms. Jones (not her real name), a 21-year-old referral to the primary care practice at the Johns Hopkins Community Physicians location at Wyman Park, was grappling with worsening diabetes, obesity and depression. She had agreed to let Chaudhary, then a first-year Johns Hopkins medical student, see her before her appointment with her internist. Chaudhary recalls that the patient was distressed. She gives the following account of their meeting:

“I’ve been feeling very lonely and lost,” Jones began. Eyes welling up, she went on to describe her feelings of worthlessness. Chaudhary urged Jones not to give up on herself. They discussed the power of positive thinking and small behavior changes, such as eating healthier snacks. Then, despite Jones’ misgivings about side effects, Chaudhary asked her to consider resuming her medication for depression.

Four weeks later, Jones returned to Wyman Park, eager to tell Chaudhary that she’d started a new diet and had lost some weight. She also noted her brighter outlook on life. She wanted to discuss meeting with a therapist as an alternative to taking medication.

The interaction would prove transformative not only for Jones but also for Chaudhary, who was working at the practice as part of the school of medicine’s outpatient clerkship. Although she knew that the community physician supervising her would also meet with the patient, the positive encounter boosted her confidence. “Ms. Jones made me feel proud of my ability to connect and to develop a sense of trust with someone I had just met,” she says.

Chaudhary was working at Wyman Park alongside internist Fernanda Porto Carreiro as part of the Longitudinal Ambulatory Clerkship (LAC), a program that introduces first-year med students to primary care practice outside the hospital. Now in its ninth year, the yearlong clerkship allows trainees to participate in medical care once a week with physicians who are treating patients in the community.

Most medical schools require students to work alongside primary care practitioners. And Johns Hopkins LAC directors, who all practice primary care, believe that students should learn how to build relationships with patients as early as possible.

The clerkship teaches students to assess not only a patient’s unique biology and genetic inheritance but also his or her environment, including social and cultural factors. The goal is to come up with an accurate diagnosis and effective treatment plan based on each patient’s medical history, situation and personality, rather than merely biology and abnormal physiology.

There’s a lot of ground to cover in one visit. In a meeting that can run as short as 15 minutes, a primary care physician must take a history, make the patient feel at home, use open-ended questions, build trust, discuss a situation and determine the plan of care, acknowledge the patient’s efforts and emotions, and establish what will happen between the current and next visit.

In the process, trainees also learn valuable lessons about their patients’ lives, says Maura McGuire, one of the directors of the program. In a classroom, “you can talk about patients’ struggles with insurance, landing an appointment, transportation and family dynamics, but you won’t understand it till you go out in the world.”
Currently, about 120 physicians in the Baltimore area participate in the ambulatory clerkship; 85 percent of them are from outside Johns Hopkins.

Sir William Osler, The Johns Hopkins Hospital’s first physician-in-chief, was among the first in the nation to believe that students should receive formal instruction in clinical medicine at the bedside. Back in the 1880s, his insights laid the groundwork for the primary care field of medicine, in which a physician guides patients through myriad options and referrals in an ongoing relationship that builds over time.

Now, however, the primary care field, which consists of general and family practice, general internal medicine, general pediatrics and geriatric medicine, is one of the least favored career choices for young doctors. When compared with specialties, such as anesthesiology and radiology, primary care requires longer hours with lower pay, lower Medicare reimbursements and more complex patients.

Yet demand for primary care services is at an all-time high. And, according to the Association of American Medical Colleges, the nation’s aging population is rapidly increasing the need for practitioners. By 2025, estimates say demand for physicians will exceed supply by as many 90,000. Increasingly, nurse practitioners and physician assistants are bridging care gaps.

In recent years, the Johns Hopkins University School of Medicine has responded with several strategies to spark more interest in the field. These include the creation of a Bloomberg Distinguished Professorship devoted to primary care, a position that includes teaching nursing students and public health students, and the launch of an elective primary care track for medical students, with focuses on chronic disease treatment, research and health care delivery.

Colleen Christmas, who directs the new primary care track, hopes that the students who complete it will enter primary care-oriented residencies, like general internal medicine and pediatrics. The track includes a three-year clinical experience in best practices and research projects, and a clinical rotation for fourth-year med students.

The mandatory clerkship has already ignited the interest of Tim Gilpatrick, a second-year med student who just wrapped up his training with MedStar Good Samaritan Hospital internist and rheumatologist Peter Holt. “I thought for sure I wanted to be a pathologist, which involves no conversation with patients,” says Gilpatrick. “But the clerkship made me realize how much I enjoyed hearing patient stories.”

He was struck by the level of respect patients had for Holt—many of whom had been with him for 25 years. Most of these patients suffer chronic pain from joint, tissue and autoimmune disorders. After Gilpatrick talked to patients alone and took vital signs, Holt would enter and ask follow-up questions. “Watching Dr. Holt has helped me appreciate how to show empathy and build rapport with patients,” Gilpatrick says.

Considering that the average internist or pediatrician sees as many as 25 patients a day—often with complex problems—why would a community doctor like Porto Carreiro want to spend even more time training med students?

Porto Carreiro says that mentoring Chaudhary, the first med student she has worked with, offered her a fresh perspective on her practice and raised questions that they explored together. Their conversations ranged from such topics as medication interaction to how cultural bias can affect patient relationships (see sidebar).

For her part, Chaudhary credits her preceptor for finding opportunities to reinforce classroom learning and improve her skills. “Dr. Porto Carreiro helped me recognize some areas where I struggled, such as reporting a patient history, and then made it a point to allow me to practice that skill every time I came into the office.”

So far, the med student says her greatest rewards have come from teaching patients how to prevent chronic illnesses, like diabetes, from spiraling out of control. Meanwhile, developing relationships with patients, as well as with a preceptor, has generated personal and professional benefits that will likely endure.

For more about the Longitudinal Ambulatory Clerkship, visit bit.ly/longitudinalambclerkship.

For more about the progress of the primary care track, visit Training Future Leaders in Primary Care.

Getting patients to tell their stories fosters meaningful relationships and may empower them to take better care of themselves, says Maura McGuire, co-director of the Johns Hopkins Longitudinal Ambulatory Clerkship.

But it’s not always easy for patients to share details about their lives—at least, not at the beginning, says internist Fernanda Porto Carreiro. By the end of the 30-minute visit, however, her patients usually seem more relaxed.

Things happen in families that affect health, she explains, and it’s usually during these last five minutes that patients find the courage to mention them. “By the way,” one patient recently told her, “my son’s in jail.” Sometimes, all the physician can do is listen—“and that may be all they want.” But if a patient mentions addiction, emotional distress or sexual abuse, Porto Carreiro brings in a social worker.

Tackling Bias in the Exam Room

One day last summer, Johns Hopkins internist Fernanda Porto Carreiro introduced med student Anila Chaudhary to a middle-aged patient. Because his wound was nearly healed, their exchange was brief. Chaudhary shook the patient’s hand, noting that it was nice to meet him. He nodded, then said, “I hope you love this country!”

Mumbling goodbye, Chaudhary hurried into to her preceptor’s office. “As a woman wearing a hijab, I felt as if he saw me as an outsider,” she says. But though Chaudhary’s parents are Muslim immigrants from Kashmir, she was born in Baltimore and grew up in Philadelphia, where her family owns a pizza shop.

After Porto Carreiro heard her story, she added her own comment. “I’m the one who wasn’t born in this country,” the Brazilian native said.  And although the community physician urged the med student not to take such remarks personally, she admits she also struggles against stereotypes. It still stings, for instance, when patients who assume she is Spanish-speaking tell her, “I’m glad you speak English!”

Many physicians confront bias from their patients because of their race, gender or religion. A recent study found that nearly one-quarter of Muslim physicians in the United States say they have experienced frequent religious discrimination during their careers. More recently, their anxiety level has increased since the deadly attacks in San Bernardino, California, and the ones in Paris linked to the Islamic State group, which led some conservatives to call for a ban on all Muslims who are citizens of foreign countries to travel to the U.S.

Although health providers can’t erase bias, they can learn how to recognize and disarm it, says Danny Teraguchi, assistant dean for student affairs. Since 2008, he’s lectured on unconscious bias as part of the Health Care Disparities course—the first course med students take.

Stereotypes frequently come to light. “Students often feel they are open to all individuals but may not realize the unconscious biases about certain populations,” he says. In exploring the sexual history of an older patient, for example, students may assume that the patient is not sexually active and may not ask appropriate questions.

Physicians also carry biases into the examining room, Teraguchi says, sometimes making assumptions about patients that deeply offend them. “One such incident is when a physician assumes a male patient is married to a woman. The patient can immediately shut down because it is clear that physician will never understand him or relate to his life,” he points out. “The key is finding ways to respect patients’ identities and what matters to them regarding their health.”

In cases like Chaudhary’s, he says, “You have to ask yourself how to respond to it in a productive way. Negotiate it. You don’t want to fuel the fire. Discuss it with a preceptor, or confront the patient with: ‘I don’t understand what you mean by that.’” It’s hard to do, he admits, “but it makes people accountable and empowers students.”

Over time, Chaudhary has come to appreciate that though patients may not voice their opinions, “the way I look might cause them to form opinions about me that affect the relationship we form. So I might have to work harder to fight possible misconceptions that patients come in with. And I’m OK with that.” 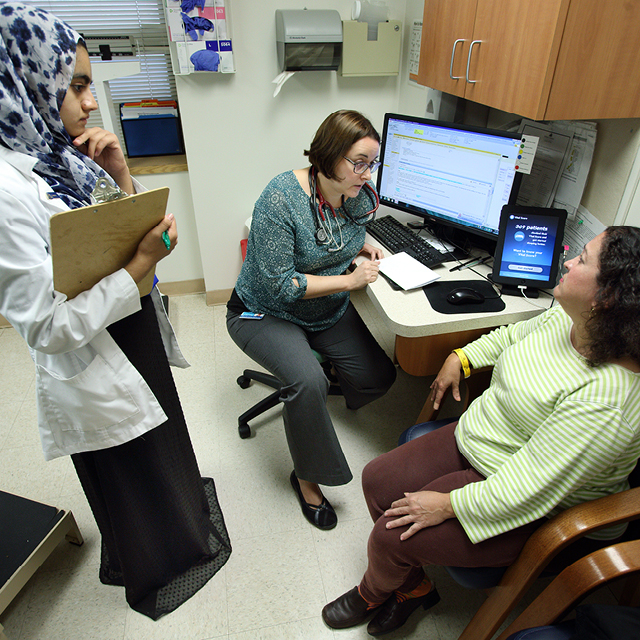 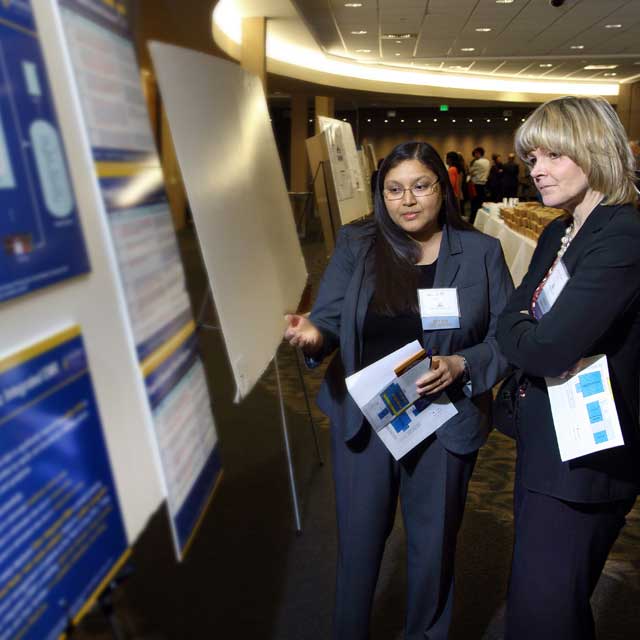 New professorship and other efforts bolster an under-recognized specialty.
back to top button