On a cool spring Saturday morning, Katie O’Conor and nine other Johns Hopkins clinicians and administrators arrive at the intersection of North Fremont Avenue and Laurens Street, in the Upton neighborhood of West Baltimore.

They set up folding chairs and tables, arrange computers and stack consent forms. They put out single-serve snacks and bottles of water.

In a few minutes, people who inject drugs would come to this city-run syringe exchange site to swap their used supplies for clean ones. When they did, the Johns Hopkins mobile COVID-19 vaccination clinic would be ready.

“What I love about this is we are adapting the environment to meet the community’s needs,” says O’Conor, an emergency medicine/anesthesiology resident and co-chair of the Johns Hopkins Vaccine Equity Task Force.

That may seem like a small number in a city of nearly 576,000, but O’Conor knows that every shot in every arm brings the pandemic closer to containment, particularly when those arms belong to people most at risk for getting seriously ill or dying of COVID-19.

Her group and other vaccine equity teams at Johns Hopkins Medicine are concentrating their efforts on people who are hardest hit by the COVID-19 pandemic, including those who are Black, Latino, Indigenous or elderly. The idea is to remove logistical and psychological barriers for people who may lack the time or transportation to make and keep vaccine appointments.

O’Conor and others at Johns Hopkins are making it easier for them by bringing the doses to street corners, churches and public housing complexes.

“We do not require anyone else to have computer or health literacy,” says O’Conor. “It’s on us.”

At the syringe exchange site, participants did not need appointments. Instead, Johns Hopkins administrators registered them on the spot, assuring them that their information would not wind up with law enforcement or immigration officials.

People at the syringe exchange site were already taking action to protect their health; O’Conor says she was not surprised that they also lined up for the vaccine.

It helped that they were offered a choice between the two-dose Pfizer vaccine and the single-dose Johnson & Johnson vaccine. “This population, with substance use and unstable housing, doesn’t often have access to choices, on their terms,” says O’Conor, adding that about 60% chose Pfizer.

O’Conor’s mobile vaccination clinics, operating since late February, have provided at least one vaccine dose to more than 2,700 Baltimoreans.

Nearly 2,000 additional city residents have received at least one dose through clinics run by Kathleen Page, co-director of Centro SOL, the Johns Hopkins-based group that promotes health equity for Latinos in Baltimore. (See sidebar for more about vaccine outreach to Baltimore’s Spanish-speaking residents.)

And 2,545 people in Washington, D.C., communities with high infection rates are fully vaccinated, thanks to Johns Hopkins clinics.

“In order to achieve high vaccination rates, we need to reach out to every group,” says Ben Bigelow, the Johns Hopkins medical student who is spearheading all three vaccine equity efforts across Johns Hopkins Medicine.

A Lifetime of Community Service

O’Conor’s work with the Vaccine Equity Task Force continues her longtime push to address the disparities that she first encountered growing up in Baltimore. “Health equity and discrimination are not just social justice concepts,” she says. “They are real factors that rob us of our loved ones.”

At the University of Pennsylvania in the 1990s, she co-created a community engagement center that still links volunteers with local nonprofits and provides community service and advocacy education.

She later became a film producer, but ultimately decided she could do the most good by becoming a doctor. She returned to Baltimore to attend the Johns Hopkins University School of Medicine, while devoting time to issues including police-community relationships and human trafficking.

When the COVID-19 pandemic came to the United States, O’Conor was a resident in emergency medicine, critical care and anesthesiology at The Johns Hopkins Hospital. “I wanted that clinical training in emergency medicine because it takes care of the patients who fall through the cracks,” she says.

In December 2020, she became operations chief of the JHM Unified Command, the Office of Emergency Management team coordinating the COVID-19 response across the Johns Hopkins Health System and school of medicine.

The same month, Pfizer and Moderna received emergency use authorizations for their COVID-19 vaccines, ushering in new challenges and opportunities for fighting disparities during the pandemic.

The group knew that institutionwide emails with information about vaccination opportunities left out many employees in security, food, facilities, patient transport and environmental services who don’t work in front of computers.

“The first thing we did was reach out to all the managers of all the departments we thought might be left out and asked them what they wanted,” says O’Conor. In response, task force members went to the departments to provide information and answer questions. They offered posters with QR codes for making vaccine appointments, and held virtual town halls in English and in Spanish.

Golden developed videos and articles with information of particular concern to employees of color, including the demographics of the vaccine’s clinical trials, which she noted generally reflected the diversity of the U.S. population.

In February, Johns Hopkins Medicine began working with the Baltimore City Health Department to launch mobile clinics. O’Conor’s team held its first community vaccine clinic on Feb. 25, at a senior housing complex in Baltimore. Since then, it has held three to four clinics a week, partnering with local churches and other groups.

“Many people want to know what their pastor and neighbor think about the vaccine,” says Golden. “We have to work with our communities’ trusted messengers and arm them with information to help the communities.”

One such partner is the International Rescue Committee (IRC), an immigrant support organization that recently participated in a vaccine clinic at St. Anthony of Padua Church in northeast Baltimore.

Members of the Johns Hopkins team had done their prep work. They had assessed the church basement days earlier to ensure there was enough room for physical distancing between the stations for registration, vaccination and recovery. They had worked with IRC to let people know about the clinic and pre-register if they wanted. On IRC’s advice, interpreters of the African languages of Swahili and Tigrinya were on-site.

During the clinic, volunteers stood on either side of busy Frankford Avenue, holding signs to let passersby know the clinic was open for walk-ins.

“This is only possible because of the dedication and willingness to donate time that we have seen from people across the institution,” says O’Conor. “At every clinic, we have a diverse mix — nurses, community health workers, students, world-famous surgeons — really members of every department.”

The vaccination clinics are also reaching people through Johns Hopkins affiliates, says O’Conor, including the Kennedy Krieger Institute and the Henderson-Hopkins school. Johns Hopkins Home-Based Medicine (JHOME) is bringing vaccines to people who are receiving care at home.

“There are a lot of people who still need to be vaccinated, who just need the right opportunity. We are providing those opportunities. It is a joy and an honor to be able to give back, in even a small way, to the city that made me who I am.”

Alejandra Flores-Miller walked into the East Baltimore barbershop and asked the owner to turn down the music so she could make an announcement.

Speaking in Spanish, she said that anyone who wanted a COVID-19 vaccine could get one: A Johns Hopkins Medicine clinic at the nearby Sacred Heart of Jesus Church had extra doses.
Read more.
Related Reading 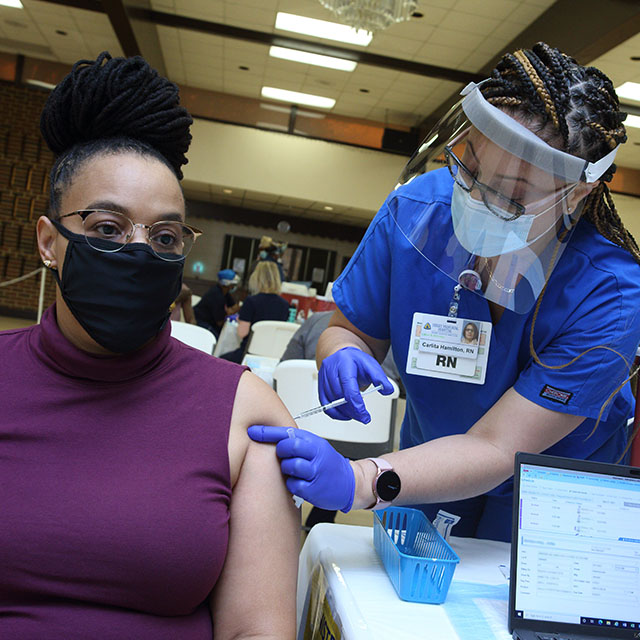 About 25 Suburban Hospital employees volunteer for each session of the hospital's community COVID-19 vaccination clinic, ensuring a smooth process for eligible Montgomery County residents.
back to top button