From the beginning, note pediatric cardiologist William Ravekes, pediatric cardiac intensivist Kristen Nelson and cardiac surgeon Luca Vricella, the signs were troubling. Their 3-year-old patient, Kamari Ibn-Said, born with hypoplastic right heart syndrome, was unable to adequately pump blood to his lungs and oxygenated blood throughout his body. He successfully underwent the first two of three surgeries to rearrange his cardiac blood flow and allow the left ventricle to do the work of the right. Then, at age 3, he began to experience feeding issues and facial swelling, indications that his remaining left ventricle was struggling. Indeed, cardiac catheterization findings revealed severe heart failure.

The specialists agreed that Kamari needed a heart transplant and, to get there, the support of a ventricular assist device (VAD) as soon as possible. They felt an internal VAD would be best for Kamari because studies showed it posed less risk of stroke and better prospects of recovery than an external drive VAD.

“The beauty of this device is that the only thing sticking out of the patient is the drive line, which connects with a computer,” says Nelson, director of the VAD program at Johns Hopkins Children’s Center. “It allows patients to be much more mobile, improving their ability to rehabilitate while they wait for a heart transplant.”

Kamari, however, was little, with a body surface area of only 0.6 m2 (weight 13.8 kilograms/height 38 inches). Implanting an internal VAD, designed for adults only, posed nearly insurmountable challenges. Indeed, if Vricella was successful, Kamari would go on the record as the smallest patient with the device.

“As I knew from the literature,” says Nelson, “he would be the smallest patient to have this type of VAD.”

To overcome the challenge and ensure that the VAD fit—and worked—appropriately, Vricella had to deploy some creative surgical manipulations, including removal of part of the VAD apparatus and Kamari’s mitral valve. It worked.

“Luca said we’ll try the internal device and if it doesn’t fit, we can always do the external VAD,” says Ravekes. “To his credit, he tried the harder surgery because it was better for the patient, and we didn’t need to go to our backup plan because he was able to do it.”

That was in October 2016. Then the wait began for a new heart as Kamari recovered with his VAD in the Johns Hopkins pediatric cardiac intensive care unit. It ended up being a six-month wait as no compatible donors came Kamari’s way until April 2017. In addition, while the size of the donor heart was a match, due to resuscitation efforts it was a very sick heart that had been turned down by 22 other cardiac transplant centers. Worried about Kamari’s increasing risk of complications on the VAD, Nelson came up with a plan to accept the heart. She would co-manage treatment of the heart by the outside hospital and help wean it off resuscitation support over the next 12 hours to make it more amenable for transplant. Ravekes and Vricella agreed and the three specialists accepted the heart for transplant.

“I knew the heart was sick and would take a lot of work, but I also knew it would be way better at the end of the 12 hours than it was at the beginning,” says Nelson. “The three of us decided we should take this chance and manage him post operatively.”

“It wasn’t everybody’s favorite heart, but Kamari was so sick we felt this heart was better than what he had,” adds Ravekes.

Vricella dispatched pediatric cardiac surgeon Narutoshi Hibino to retrieve the donor heart. However, one hour after departing Baltimore/Washington International (BWI) Thurgood Marshall Airport, Hibino called Vricella to tell him the plane had to return to BWI and make an emergency landing due to fuel leakage. In a way, Vricella was not surprised: “We already knew the donor heart was sick and turned down by 22 other centers, and now this? Maybe this was another sign that we should not accept this heart.”

The team persisted, however, and later that day Hibino walked into the customized cardiac operating room at Johns Hopkins Children’s Center where Vricella waited to implant Kamari’s new heart. Already the team had to resuscitate Kamari’s failing heart and now, Vricella realized, removing his sick heart would be no easy chore given the amount of inflammation and scar tissue from three prior operations. “Dissecting the native heart out was as close to impossible as I have ever seen,” says Vricella.

Next, as he prepared the graft for transplant, Vricella noted the “tiny” size of the donor heart. Then, after implantation, it did not start beating right away, which Vricella attributed to the prolonged downtime of an “exhausted” donor heart.

“This was like the fourth time someone is trying to tell me something,” says Vricella.

The team immediately placed Kamari on extracorporeal membrane oxygenation, or ECMO, a heart and lung bypass system for pediatric patients that would give Kamari’s new heart time to rest. Two days later, his new heart started beating steadily on its own.

“It was the most gratifying thing to see the function of the heart return to normal,” says Vricella. “Maybe the Lord was telling me to have faith.”

Kamari appeared to have plenty of faith, as not long after his transplant he was zipping around the pediatric cardiac ICU in his Spider Man car, notes Ravekes: “He’s great, he’s interactive, he waves to you, he draws, and he plays games. Neurologically he’s been wonderful with no problems.”

“After three catheterizations, his heart graft function looks great and he’s had no episodes of rejection,” says Ravekes. “His heart is beating strong.”

Nelson attributes Kamari’s successful outcome to the multidisciplinary collaborative nature of intensivists in the pediatric cardiac ICU and its dedicated VAD service, pre- and post-transplant management by Ravekes, and the surgical experience and skills of Vricella and Hibino. Kamari’s mom, Miesha McMillan, made a difference, too, says Nelson: “She has been absolutely committed to understanding his cardiac disease from the second I met her. Now she is so over the moon to be going home soon, and for her son to have the opportunity to live a more normal life.”

In mid-July, Kamari was discharged from Johns Hopkins Children’s Center.

“Dissecting the native heart out was as close to impossible as I have ever seen.” 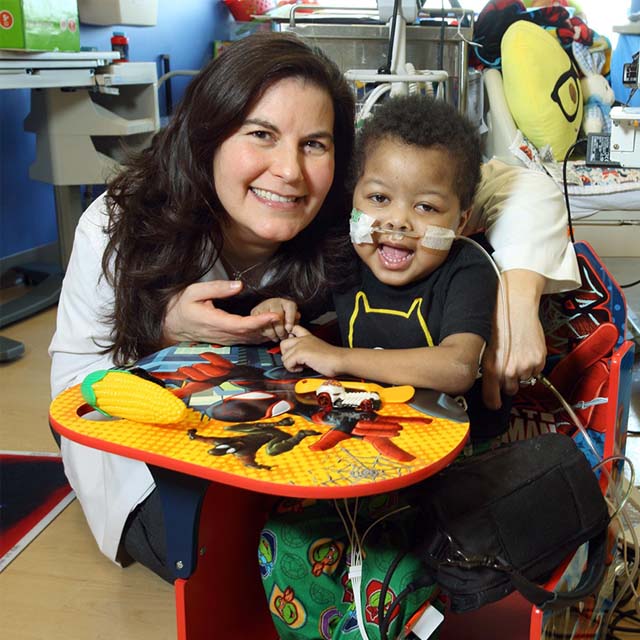