Johns Hopkins Medicine has opened a proton center that gives adult and pediatric patients access to highly targeted cancer treatment that spares nearby healthy tissues and organs, reducing potential side effects including the risk of recurrence.

“We are excited to provide state-of-the-art cancer care, with an emphasis on proton therapy research and innovative clinical trials,” says Christina Tsien, medical director of the proton center.

“Johns Hopkins physicians are committed to a multidisciplinary team approach. Radiation treatment is an important component of cancer care,” she says. “With the new facility, we have the ability to precisely target tumors with proton radiation, using sophisticated image guidance and ‘pencil beam’ scanning technology. This allows us to deliver higher radiation doses to cancer cells while sparing nearby vital organs and normal tissues. As a result, patients are better able to tolerate radiation treatment with fewer short- and long-term side effects.”

Conventional X-ray therapy allows 30% to 40% of the dose to pass through the targeted tumor. But protons stop at the edge of the tumor, preventing unnecessary damage to adjacent healthy cells and tissue. As a result, there is less damage to delicate structures such as the brain, heart and spinal column. The risk of secondary cancers from treatment also decreases.

“We know exactly how to control the energy and speed of protons, so they can deposit energy that kills the cancer and really no dose goes anywhere else,” says Theodore DeWeese, vice dean for clinical affairs and president of the Clinical Practice Association at Johns Hopkins Medicine.

The new 80,000-square-foot facility houses state-of-the-art proton therapy equipment, as well as next-generation imaging technologies such as dual energy CT-guided treatment that reduces the range of error, and the latest innovation in biomatrix MRI designed to target moving tumors in places like the lung and liver.

The center’s experts are using this advanced technology, supported by the latest research, to deliver individualized care.

A large mechanical arm called a gantry can move the beam 360 degrees around the patient, treating the tumor from several angles as it destroys malignant cells layer by layer.

A typical course of proton therapy is five days a week, for several weeks. The treatment itself takes just a few minutes, plus time for preparation and positioning. It’s usually painless, and most patients immediately return to daily activities.

The Johns Hopkins Proton Therapy Center is one of the few in the world — and the only one in the Washington, D.C., region — with a dedicated pediatric team that specializes in caring for young oncology patients. It delivers care in collaboration with Children’s National Hospital and the Johns Hopkins pediatric oncology department.

Proton therapy can be especially valuable for children, says Ladra, because it minimizes the excess radiation that can impair growth, cognition, fertility, vision or hearing.

“If a child has a tumor located on one side of the brain, protons can effectively eliminate any radiation from traveling to the other side of the brain,” Ladra explains. “Spinal tumors just behind the heart, tumors next to the eye, or tumors in the muscles next to reproductive organs are all situations where proton therapy shines and can reduce the chance of having any negative impact on those organs.”

The team of experts at the Johns Hopkins Proton Therapy Center will lead efforts to study outcomes for many types of disease treated with proton therapy, including head and neck, brain, breast, gynecological, sarcoma, lung tumors, pancreatic and liver tumors, cancer in lymph nodes, and tumors located near the heart and major blood vessels.

While clinical trials assess treatment outcomes, experts are using laboratory and biological research to better understand how the cancer cell-killing energy released by proton treatment interacts with the cells and tissue surrounding the tumor.

Through a strategic partnership with Howard University, the proton center will also serve as an educational and training site for students enrolled in Howard’s physics program.

Now, about 30 hospitals nationwide offer proton therapy, meaning it is still out of reach for many patients who would benefit from it.

More than half of patients diagnosed with cancer will receive radiation treatment, often combined with cancer’s two other treatment methods, surgery and chemotherapy, including immunotherapy and other biological therapies.

“There are more people being cured, but there are also more people living with the side effects of the cure,” DeWeese says. “It’s really incumbent upon us to use the most advanced technologies, along with chemotherapy, along with surgery, to try to give the optimal outcome. Not just quantity of life, but quality of life.”

Christina Tsien grew up in Montreal and attended McGill University’s Faculty of Medicine, where she received her medical degree and completed a residency in radiation oncology. After she finished a fellowship in radiation oncology at the University of Michigan, she joined the faculty there, became a professor and helped to build the neuro-oncology program.

She joined the radiation oncology department at Washington University in St. Louis in 2014, where she served as chief of the central nervous system service, director of clinical research, and co-medical director of stereotactic radiosurgery and the gamma knife center.

“Proton therapy will not be for everyone, but for those with tumors adjacent to vital organs or whose organs are still growing, it should help lower the risk,” she says.

“Many types of cancer are now curable with radiation. Patients are living long and healthy lives. One of the key benefits of proton therapy is its potential to reduce the risk of developing another cancer when compared to conventional radiation. This is very important.”

Tsien is married, with two sons, one in high school and one in college. 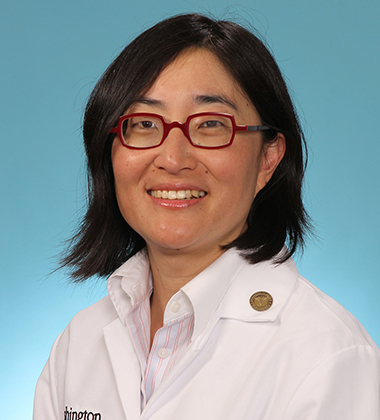