The 5-year-old girl from Guatemala needs cardiac surgery. First, however, she must see an oral surgeon because all of her teeth have decay that could cause a heart infection. Moreover, her unstable hip requires treatment. Although she and her family members live close to The Johns Hopkins Hospital, one of the world’s premier academic medical centers, they lack the knowledge and the resources to obtain its services.

Fortunately, they have Reina Gonzalez to guide them.

A bilingual medical office assistant at Johns Hopkins Community Physicians - East Baltimore Medical Center (EBMC), Gonzalez has become a trusted medical compass for uninsured Spanish-speaking patients in East Baltimore. She interprets, coordinates and advocates. She makes appointments for her clients, and reminds them, often, about those appointments. She motivates and engages as many as 116 patients a month who need specialty care at Johns Hopkins.

An admiring co-worker fashioned a poster that praises her compassion, gives her a crown and salutes her as “Queen Reina.” After seven years at Johns Hopkins, the diminutive Gonzalez has become a towering figure within the organization’s world of charitable care.

“What I like most is my communication with the patients … feeling like I’m doing something for someone,” she says.

Few of the people she helps speak English. Fearful of the health care system, they don’t know what to expect. They worry that they won’t understand what they are told, and that the medical staff will reject them because they do not have insurance.

“Reina makes it so that patients aren’t afraid to come here and access health care,” says Adrianna Moore, senior project manager of The Access Partnership (TAP) program. “One patient told us that we need 100 Reinas!”

The Honduran-born administrator is one of the stars in TAP, Johns Hopkins Medicine’s program for uninsured and underinsured patients who live in the communities surrounding The Johns Hopkins Hospital and Johns Hopkins Bayview Medical Center.

Celebrating its 10th anniversary, TAP enables qualified patients receiving primary care to be referred for diagnostic tests, imaging services and appointments with Johns Hopkins specialists. Gaining access to surgery, cancer treatment and other forms of specialty care can prevent many of these community residents from making multiple trips to the emergency room or from having treatable conditions become more serious without timely care.

“TAP is an incredibly important, yet under-recognized accomplishment of the organization,” says John Colmers, senior vice president for health care transformation and strategic planning at Johns Hopkins Medicine. “It represents some of the best of what we aspire to be here at Hopkins. We can be enormously proud of being able to provide these types of services to patients who are in the most need.”

Before Hopkins launched the program in 2009, many patients who were eligible to receive primary care through state or federal insurance could not afford to pay for the next level of tests and treatment that their physicians recommended. Patients who participate in TAP pay an advance fee of $20 every three months.

There are no additional bills for services received through TAP.

All Johns Hopkins specialty physicians who treat TAP patients donate their services — a fact that stuns many observers.

“When we started, I was told by multiple people: You’ll never get the doctors to do this,” says Anne Langley, JHM’s senior director of health planning and community engagement. “The fact is, nobody has ever said ‘no’ to caring for a TAP patient.”

“The biggest misconception about TAP is that it’s a bucket of money that we can hand out to people. The truth is, we don’t have any money. Instead, what the program does is make our financial assistance policy work. Hopkins clinicians provide their services without charge, and TAP makes it easy and efficient for them to do that.” 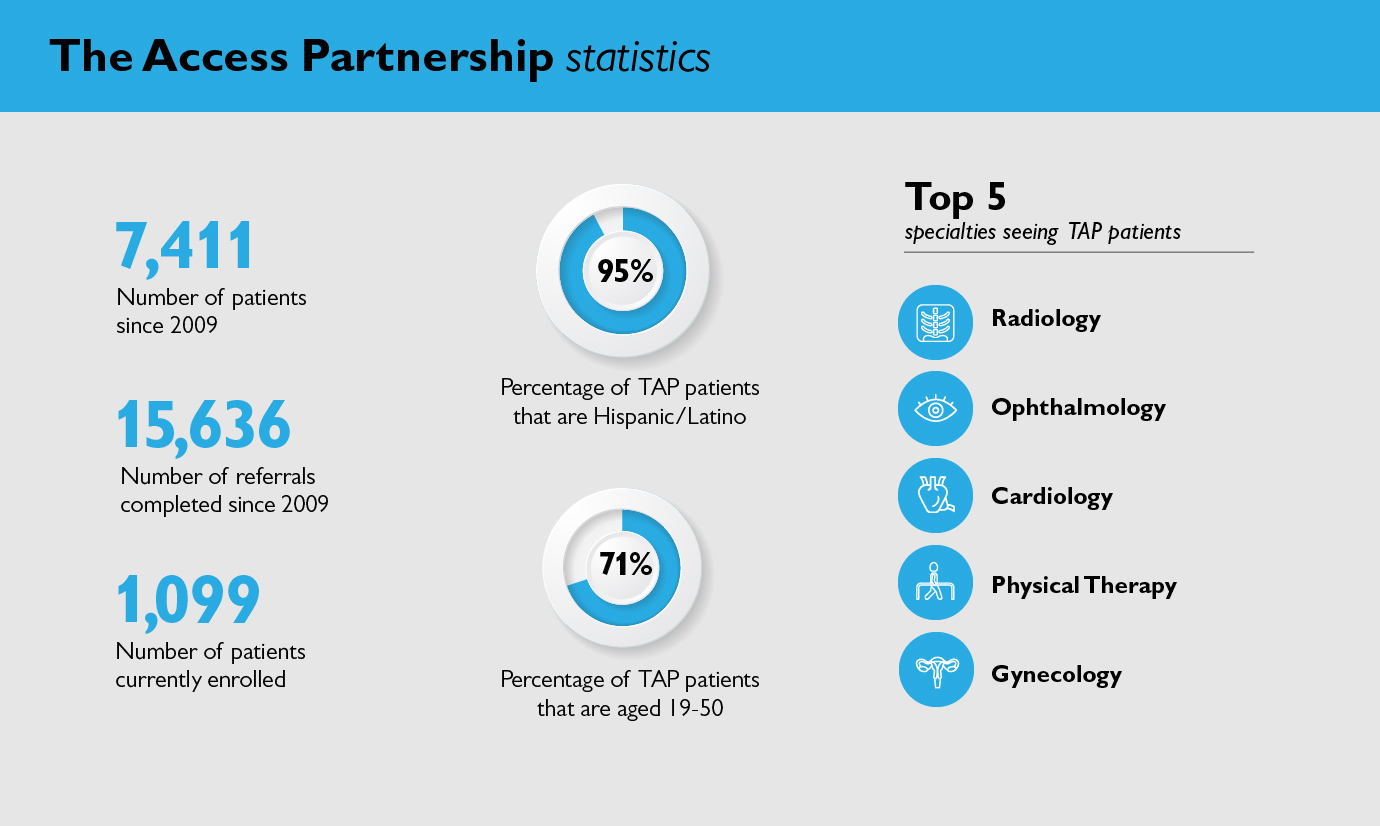 The Access Partnership, which bridges the gap between primary and specialty care, embodies founder Johns Hopkins’ charge that the hospital provide the highest standards of health care to every member of the community.

The program was created with the help of hospital leadership, faculty physicians and administrators. At first, it served only those patients at East Baltimore Medical Center who lived in two zip codes. Now, the program serves patients living in 10 zip codes who use primary care clinics at The Johns Hopkins Hospital and Johns Hopkins Bayview as well as at Health Care for the Homeless, Chase Brexton Health Care, the Esperanza Center and Baltimore Medical System. Nine patient navigators assist with the process.

Over time, the demographics of TAP’s population have changed. In 2009, most patients were African American. By September 2018, however, 95 percent of the patients were of Hispanic or Latino origin. Because of the additional insurance coverage now available through the Affordable Care Act and expansion of Medicaid, TAP now primarily assists uninsured immigrants.

TAP patients enter, leave and re-enter the program according to their medical needs. Currently, the active population stands at around 1,100, with roughly 70 percent aged 19 to 50. More than half — 51 percent — live in ZIP code 21224, located south and east of JHH and JHBMC.

Along with Barbara Cook, TAP’s chief medical director, Johns Hopkins physicians Rosalyn Stewart and Sarah Polk review all requests for specialty care to make sure that referring physicians have already tried standard treatments. For instance, they may deny requests for MRIs for back pain unless patient medical records show that physical therapy, analgesics and other conservative measures did not work.

After a referral is approved, the patient is matched with a bilingual TAP navigator like Reina Gonzalez.

“Our navigators have been the ‘secret sauce’ in the TAP program,” Cook says. “They assist all of our patients with obtaining and keeping appointments, encouraging them to call with questions or concerns. It is concierge medicine for some of our most vulnerable patients.”

Teaching the Next Generation of Doctors

Not only does the program bridge a crucial health care gap for patients, but it also teaches Johns Hopkins residents how to practice primary care that is careful and cost-effective, says associate professor Lenny Feldman, director of the school of medicine’s Internal Medicine-Pediatrics Urban Health Residency Program.

“During our recruiting season we talk about TAP a lot because this is a unique aspect of care at Johns Hopkins that is worth really emphasizing to our applicants,” Feldman says.

Katie Shaw, a primary care physician at EBMC, was a resident in Med-Peds Urban Health in 2011.

“One of my earliest memories is a patient who had had a heart attack and needed bypass surgery. It was before Medicaid and Obamacare extended services for a lot of patients, he didn’t have insurance, and he was too young for Medicare,” she recalls. “TAP eventually covered his whole bypass surgery, saving his life and helping prevent future hospitalizations.”

Monica Mix, another primary care physician at EBMC who, like Shaw, supervises residents, says the most difficult part of practicing primary care is realizing that some patients can’t afford the treatment that could help them.

“It’s just heartbreaking,” she says. “It’s even worse to have to say to a resident ‘We both know what this patient needs, but we have no way to get him that.’ That’s why TAP has just been so important.”

A New Lease on Life

Jose, who requested using only his first name, suffered frequent epileptic seizures since childhood that kept him from finishing school and finding steady work. At any time, without warning, the 36-year-old could experience a debilitating attack on the street, at church or on the job that would not only scare bystanders and associates but also leave him unable to function normally for at least 15 minutes.

The uninsured East Baltimore resident qualified for the TAP program at the Esperanza Center, his primary care clinic. After he was hospitalized at Johns Hopkins in 2017 for seizures, Wardi Donnelly, TAP’s bilingual liaison at the clinic, arranged for Jose to see Johns Hopkins neurologist Emily Johnson.

At first, she adjusted his medication. After realizing it was not preventing his seizures, the neurologist asked TAP to approve rigorous inpatient testing to determine whether Jose’s epilepsy would benefit from a new surgical intervention.

The evaluation suggested he was a good candidate for laser ablation, a technique tailored to the part of the brain that was producing the seizures.

Jose underwent surgery, performed by neurosurgeon William Anderson, at The Johns Hopkins Hospital in December 2018. Since then, he has continued to take his medication but has not experienced any seizures. Johnson’s next step will be to decide whether he can be weaned off medication.

With Donnelly serving as his interpreter, Jose recently talked about this life-changing experience. Now, more than six months past his last seizure, he believes he will never have another.

For the first time, he is beginning to set goals. He hopes to find steady work, perhaps as a painter or laying concrete.

“Before, people were scared to give me work, but now they see I’m much better,” he says. “I lived in constant fear of where I’d have my next attack. But I know that I am fine now. I’m happy, because I don’t have to worry any more. The greatest gift is my peace of mind.”

Whenever Johns Hopkins Medicine leaders speak about the success of The Access Partnership (TAP) program, they mention the dedication of founding medical director Barbara Cook, who will retire from that job this summer.

Formerly president of Johns Hopkins Community Physicians, the 75-year-old physician came to Johns Hopkins Medicine in 2000 as JHCP’s vice president for medical affairs. At the time, she was already deep into a medical career distinguished by compassionate care and community outreach.

In the 1980s, working as a doctor with the National Health Service Corps, Cook directed the outpatient clinic at former Miners Hospital No. One in Welch, West Virginia.

“We took on the powers that be to provide quality care to those patients,” she remembered in a 2008 interview with Dome. “It showed me early on what people committed to doing the right thing could accomplish if they stuck together.” 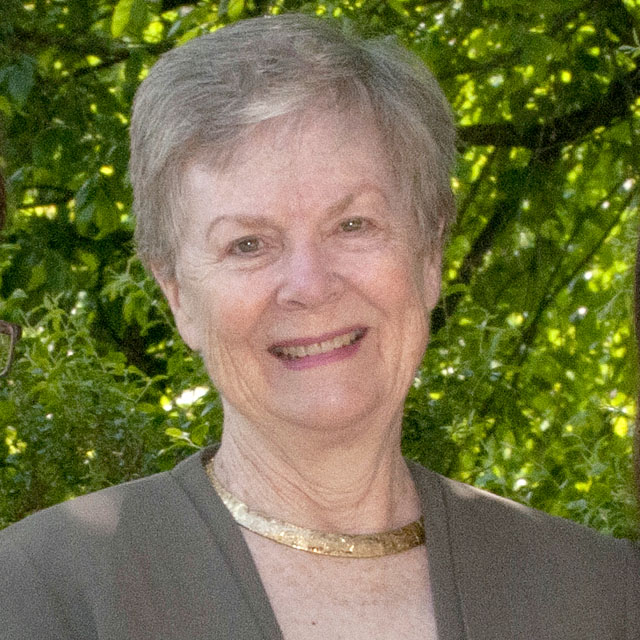 Barbara Cook
back to top button