Jason Vaught delivered a baby just a few hours earlier, and now he’s in Robert Brodsky’s hematology lab, preparing serum for experiments that could help other pregnant women and their babies.

The 34-year-old high-risk obstetrician and critical care doctor pauses from his pipetting to explain why he splits his time between the clinic, where he treats women with high-risk pregnancies, and Brodsky’s lab, where he is studying a particularly serious pregnancy complication called hellp syndrome.

“I’m a better maternal-fetal medicine clinician because of my lab work,” he says. “And I’m a better researcher because I understand what’s at stake.”

Vaught is a physician-scientist, a term broadly defined as a person with an M.D. who devotes a substantial amount of time, usually around 70 percent, to biomedical research. Many, but not all, continue to work in clinical settings related to their research.

To encourage more physicians to pursue this important but arduous career path, the school of medicine created a new Physician-Scientist Training Program. The director is pathologist Kathleen Burns, who sees patients with blood disorders and studies the roles of repetitive dna sequences in human disease.

Specifics for creating a community of physician-scientists at the school of medicine include helping trainees identify research mentors, providing funding for research projects and travel to conferences, helping residents and fellows apply for career development awards and research grants, and helping physicians focus their clinical training to allow for lab time during their residencies or fellowships.

Concerns about the scarcity of physician-scientists have been voiced since at least the 1970s. In 2013, the National Institutes of Health (NIH) convened a work group to address the problem. The group’s 2014 “Physician-Scientist Workforce Working Group Report” says barriers to this career path include cuts in nih funding, lower compensation compared with clinical care and poor work/life balance as physician-scientists juggle lab time and clinic hours. The average age a physician-scientist receives a first independent research grant is 45. As a result, many who start on this road opt out.

According to the report, the number of physician-scientists receiving NIH funding has stagnated at roughly 9,000, representing a decreasing percentage of a growing biomedical workforce. Today, nih-funded physician-scientists make up less than 2 percent of the nation’s medical doctors.

“It’s critical for the Johns Hopkins University School of Medicine to respond to these trends,” says Burns. “The physician-scientist is at the core of who we are as an institution. And our combination of excellence in patient care and our innovation and collaboration in research make this a wonderful place for young physician-scientists to train today.”

Physician-scientists drive major advances in medicine. Jonas Salk, for example, developed the polio vaccine. Alexander Fleming invented penicillin. And physician-scientists have a long history at Johns Hopkins, starting with William Osler, who created modern American medical education by insisting that students learn both at the bedside and in the lab.

“The juxtaposition of science and medicine was the catalyst to help us become what we are,” says Mark Anderson, director of the Department of Medicine. “But the physician-scientist pathway needs special care and feeding to really come to its full potential. We want to make sure we can deliver on this promise.”

Departments, including those of Anesthesiology and Critical Care Medicine and of Gynecology and Obstetrics, are already supporting physician-scientists.

Vaught, for example, had no lab experience and no intention of becoming a researcher when he arrived at Johns Hopkins as a fellow in 2013. “I definitely started on a clinician track,” he says. But his maternal and fetal medicine program encouraged a year of research and provided both time and financial support.

As with other physician-scientists, finding the right mentor was key. Vaught teamed with Brodsky, director of the Division of Hematology, who was recently named head of the physician-scientist pathway in the Osler Medical Residency Training Program.

Vaught wanted to learn more about hellp syndrome, a life-threatening condition that affects about 1 percent of pregnant women and develops after the 23rd week of pregnancy. hellp stands for hemolysis (breakdown of red blood cells), elevated liver enzymes and low platelets count. The only treatment is immediate delivery, which can be dangerous for preterm infants.

Brodsky led development of a test that measures components of serum, a protein-rich liquid in blood. He used the test to diagnose a genetic blood-clotting disorder known as atypical hemolytic-uremic syndrome, which can occur at any age.

Vaught used the same test to study the serum of women with hellp syndrome, finding evidence that the two conditions have similar biochemistries. His results, published in the May 2016 issue of Experimental Hematology, could lead to treatments that reduce preterm deliveries.

The Best of Both Worlds

Brodsky remains a mentor to Vaught, who joined the faculty in July. “Our lab supports him, but he’s running his investigations independently,” says Brodsky, who is now helping Vaught apply for career development funding from nih.

Landon King, executive vice dean for the school of medicine, knows from his own experience that the right mentor can inspire a lifelong pursuit of research. The pulmonologist had such a mentor while in medical school. As a result, “I became enthralled with the idea of being able to contribute to our knowledge of particular ideas or problems,” says King, who studied water channels in the lungs at Johns Hopkins alongside 2003 Nobel laureate Peter Agre.

“We want our programs to increase the likelihood of people choosing careers in investigation in addition to taking care of patients,” says King. “We want our folks to come out of their training with opportunities and tools to pursue their aspirations.”

Vaught, chatting with Brodsky as he works, has those tools and opportunities—a lab and mentor that support him, and patients who inspire him. Imagining a brighter future for women with hellp syndrome “makes it easy for me to skip lunch and do this,” he says. “This is research I feel passionate about.”

“The physician-scientist is at the core of who we are as an institution.”

A Sampling of Johns Hopkins Physician-Scientists

Physician-scientists earned medical degrees—and Ph.D.s in some cases—and devote much of their time to research. As the examples below show, they are central to the history and mission of Johns Hopkins Medicine.

Arnall Patz, ophthalmologist, won a Lasker Award in 1956 for his research showing that high doses of oxygen could cause blindness in premature infants. The award was presented by Helen Keller, the deaf and blind activist and author.

Victor McKusick, internist, winner of the 1997 Lasker Award, founded the Division of Medical Genetics in 1957 and led the world in searching for, mapping and identifying genes responsible for thousands of inherited conditions.

Peter Agre, hematologist, won the 2003 Nobel Prize in Chemistry for discovering aquaporins, which are proteins that move water molecules through the cell membrane. He directs the Johns Hopkins Malaria Research Institute.

Diane Griffin, virologist, is a world leader in the study of viruses that cause encephalitis and measles.  Among her many honors, in 2004, she was elected to both the American Academy of Microbiology and the National Academy of Sciences.

Bert Vogelstein, pathologist, was in the first cohort of 11 winners of the Breakthrough Prize in Life Sciences in 2013, which awarded him $3 million to continue his work understanding cancer as a genetic disease.

The Long, Difficult Journey to Physician-Scientist

Rachel Damico arrived at The Johns Hopkins School of Medicine in 2000, armed with an M.D./Ph.D. from the University of Pennsylvania and eager to advance her research in pulmonary hypertension, a type of high blood pressure that affects the lung’s arteries. She worked long hours in the lab and published scores of articles. Still, it took five years for Damico to receive her first independent NIH grant. By then, she was 45 and the mother of an 11-year-old daughter.

“The wait for a first grant can be so demoralizing,” says Damico, noting that she’s seen people change careers because of it. As a woman, Damico is among an underrepresented segment in the physician scientist workforce. One reason is that those who enter an M.D.-Ph.D. program (or an M.D. program with additional research training) must commit to at least seven years of graduate-level education. For women who want to have children, this can prove challenging in terms of child care and the work/life balance.

Though Damico wishes the physician scientist track at Johns Hopkins had come sooner, she applauds the new structure. “Having some kind of track system should allow Hopkins to differentiate paths and nurture trainees,” she says, “rather than just being fortunate to have found a good mentor, as I was.”

Damico is digging deep to understand how a patient’s genes affect physiology and epidemiology. “Most people with pulmonary hypertension live just three- to five-years after diagnosis,” says Damico. “If we can better understand the genetics and molecular basis of the disease, we can identify novel drug treatments and extend lives.” 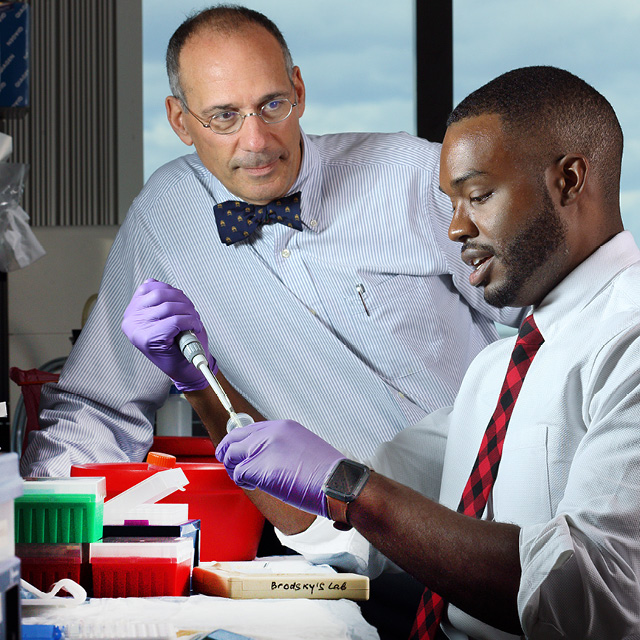 Robert Brodsky, left, is head of the physician-scientist pathway in the Osler Medical Residency Training Program and serves as a research mentor to Jason Vaught, right.
Related Reading

As they made their initial incisions and entered the peritoneal cavity, it was clear that they’d made the right choice. Abundant infectious fluid spilled out of the patient’s abdomen, and necrotic tissue filled her uterus.
back to top button