Wilmer’s Mira Sachdeva, M.D., Ph.D., is following an intriguing research avenue into how and why neurons die in conditions like diabetic retinopathy. In this area, most current research is focused on treating the leakage of blood vessels in the retina. But Sachdeva has chosen to look earlier in the disease process: when retinal neurons seem to die even before the blood vessels are damaged.

Her strategy is to protect the healthy neurons, rather than wait to treat damaged ones. If she is successful, the treatments she might one day discover could also be applied to other potentially blinding eye conditions, including macular degeneration and retinal detachment.

While a provocative strategy, it is as-yet unproven. So, when Sachdeva launched her lab as a new faculty member, she faced an all-too-familiar challenge for talented young researchers at academic medical institutions across the country: funding. Even with a promising idea for a new avenue of scientific exploration, the financial burdens of getting a lab up and running can be prohibitive.

When she began her work, Sachdeva had been allotted precious lab space by her department but lacked the necessary research tools and equipment.

“Initially, I even had to borrow pipettes from a neighboring lab,” Sachdeva says.

Large grants from institutions like the National Institutes of Health and major foundations rarely go to unproven ideas. Meanwhile, the cost of equipment and lab assistants is high and rising by the year.

As a retina surgeon, Sachdeva splits her time between revenue-generating clinical work and grant-supported research. She is able to do this because she secured a grant from Wilmer—known as a K12 grant, funded by the National Eye Institute—to help offset her salary enough to allow her to work in the lab several days a week. More recently, in March, she won her own individual K08 grant from the National Eye Institute, a prestigious award that will continue to provide her salary support to conduct her research.

These early-career K grants are designed to ensure valuable protected research time for promising clinician-scientists. However, they offer little additional funding for research equipment, supplies and personnel—and not enough for the full salary of a laboratory technician, an important asset for someone like Sachdeva, who must spend time away from her lab in the clinic and operating room.

To bridge that gap for Sachdeva and other young researchers, Wilmer turns to a broad network of individual donors.

Sachdeva receives support from the Robert P. and Arlene R. Kogod Family Foundation and through a bequest from the estate of Eleanor Young. (Though Young was never a patient at Wilmer, she suffered from age-related macular degeneration and wanted to support the ongoing quest for a cure, so she named Wilmer in her estate plan.)

“Dr. Sachdeva was recommended highly to us,” says Robert Kogod of the reasons for his philanthropy. “And my wife and I are happy to support interesting new researchers, especially at a premier organization as respected as Wilmer.”

Named a Ryan scholar during her first year as a faculty member in the Retina Division, Sachdeva received funds from an endowment donated by the family of the late ophthalmologist Stephen Ryan, M.D., awarded to new clinician-scientists who show great promise in the beginning of their careers.

Allan and Claire Jensen also support Sachdeva. Allan is a former chief resident at Wilmer, now in private practice in Baltimore, who trained at Wilmer from 1969 to 1974, in addition to doing a yearlong fellowship at the Massachusetts Eye and Ear Infirmary. Noting how much Wilmer has grown (there were only two full professors during his years here, he notes, while today there are many dozen fully funded professors), Jensen says he is impressed with the new generation of researchers.

They are smart, creative and eager to make their mark, he says, adding, “A donation seemed a good way to recognize my belief in them.”

Sachdeva is grateful for and humbled by the support. She finds it both encouraging and a constant reminder that what young researchers need most is simply someone to believe in them.

“You can never lose sight that the support is someone’s hard-earned money being invested in you,” Sachdeva says. 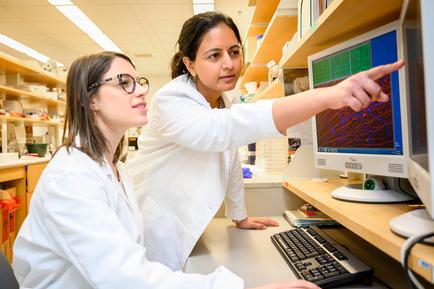 Sachdeva, right, consulting with her laboratory technician Kelcy Klein, who ensures research work continues when Sachdeva is in clinic seeing patients.
back to top button