When Brianna Fogelman checks up on her patients, the Johns Hopkins nurse pays close attention to their emotional state. She knows that’s expected of every nurse, but it feels especially vital to her — not long ago, the 27-year-old registered nurse, who cares for patients about to undergo or recover from surgery, grappled with her own fears as she waited for a new set of lungs at The Johns Hopkins Hospital.

Throughout her childhood, Fogelman struggled with asthma and other chronic lung problems, which worsened over time. She entered her 20s often gasping for breath, and she eventually required portable oxygen. In 2018, during her third year of nursing school in Delaware, she was referred to Johns Hopkins transplant pulmonologist Pali Shah, who placed her on a national waiting list for a double-lung transplant. During the next few months, Fogelman’s lungs collapsed twice, and then she developed pneumonia.

Feeling weak and defeated, Fogelman was admitted to The Johns Hopkins Hospital on June 4, 2019. She required round-the-clock care as she waited for the set of healthy donor lungs that would provide the best fit for her 5-foot-3 frame. Errol Bush, surgical director of the Advanced Lung Disease and Lung Transplant Program, rejected two pairs of marginal lungs before determining the third would work well.

Bush performed the transplant on June 24, 2019 (see sidebar). The surgery was a milestone for both the patient and the physician: It was Bush’s 100th lung transplant surgery at Johns Hopkins.

Bush says of all solid organ transplants, lung transplants have the poorest survival outcomes. Also, only 20% of donors’ lungs are used for transplantation because of concerns about organ performance due to evidence of prior trauma, aspiration or pneumonia. But Bush notes that for patients who receive lung transplants at Johns Hopkins, the one-year survival rate — a benchmark for long-term success — is now more than 93%, which exceeds the national average of 88.5%.

Fogelman is one of those success stories. Two months after her transplant, she returned to nursing school in Delaware for her senior year. She also scored an interview for a position as a thoracic nurse in Zayed 11W at Johns Hopkins. The unit’s nurse manager, Heather Sauerwald, was so impressed that she hired Fogelman on the spot.

“Brianna was a young, healthy woman with an unexpected lung disease” says Shah. “She had an incredible amount of courage and maturity, as well as a great husband and family supporting her. She inspired all of us.”

Fogelman says she was ecstatic when she was offered the position. But because patients with COVID-19 were being admitted to Zayed 11W — posing a potential risk to her health — she never had the chance to work in that unit. Instead, she was reassigned to Marburg 3, a medical and surgical unit. She began working on that floor in early September 2020, while commuting from Delaware.

Like other transplant survivors, Fogelman must take nearly two dozen pills every day for the rest of her life to prevent infections and maintain the health of her lungs.

Fogelman, who recently moved to Harford County, Maryland, says she’s still getting used to her new lungs. She relishes walking her three dogs with her husband, an electrocardiogram technician. “Now, I no longer need to stop and catch my breath,” she says.

“I’m still learning how to breathe,” she adds, noting that her co-workers “have been amazing and supportive.”

“Having been a patient here, Brianna has a strong understanding of what it’s like to be in the hospital and how patients want or expect to be treated,” says nurse manager Carole Blakeley.

Though she says she enjoys her work at Marburg, Fogelman looks forward to assuming — post-pandemic — a thoracic nursing role, working alongside the caregivers who supported her through her life-threatening ordeal.

As she reflects on her prolonged hospital stay — altogether, 42 days — she recalls the roller coaster of emotions she felt. “We can’t control our negative thoughts, but I had to come to terms with my fears,” she says. “The scariest moment was when a breathing tube was inserted. I realized that nothing mattered, except surviving.”

“The experience,” Fogelman says, “makes me more motivated to support others who are sick.” 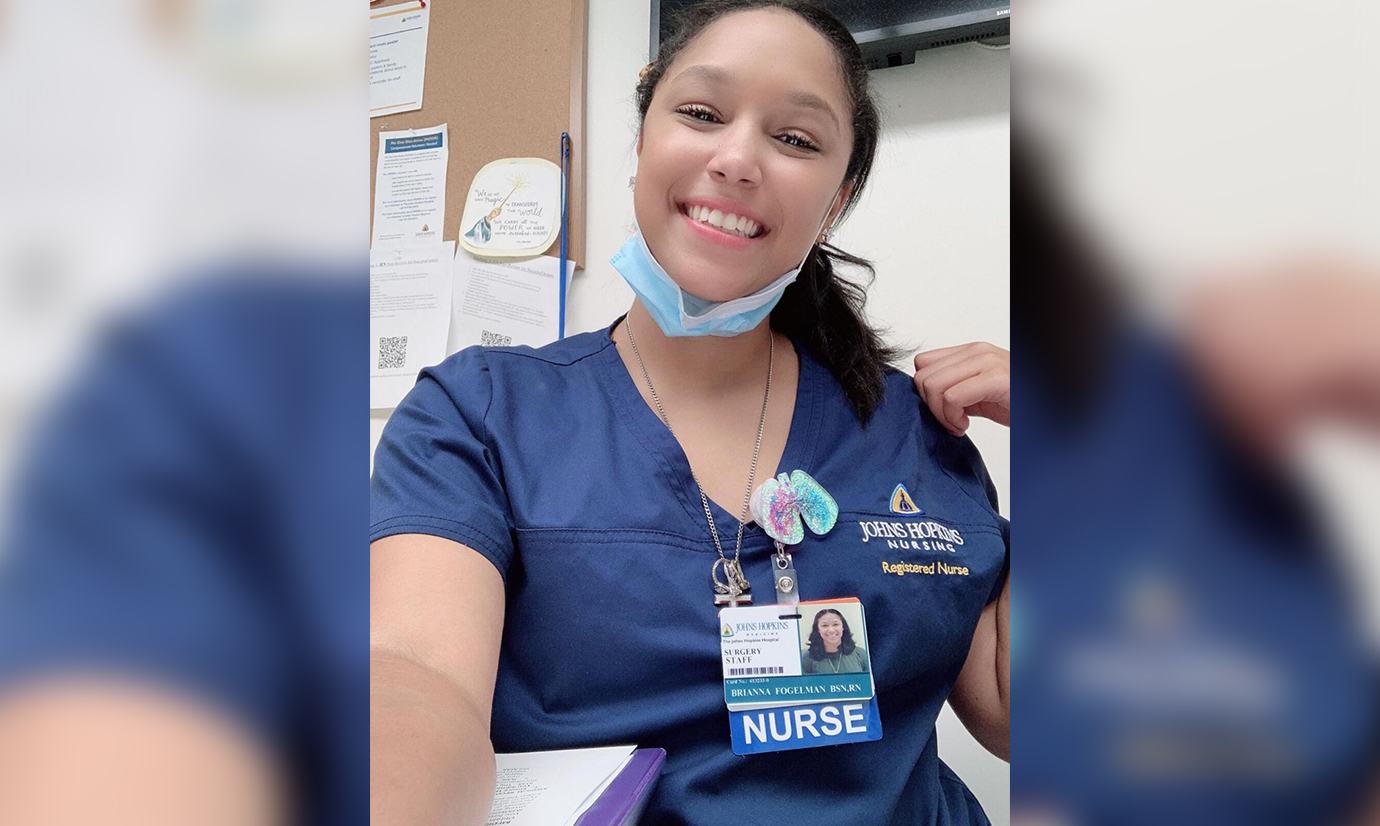 “The scariest moment was when a breathing tube was inserted. I realized that nothing mattered, except surviving.”

In 2018, when Brianna Fogelman first stepped into Errol Bush’s office to learn about her options for a lung transplant, the surgical director of the Johns Hopkins Advanced Lung Disease and Lung Transplant Program was struck by Fogelman’s warm smile — and her tenacity. “Seeing a young, minority student determined to have a successful nursing career was inspiring,” Bush says.
The next year, Fogelman became his 100th lung transplant patient in Baltimore. Before arriving at Johns Hopkins in 2017, Bush, a Georgia native, served on the faculty at the University of California San Francisco, where he performed more than 100 lung transplants.

Watch a video in which Errol Bush describes his pioneering work to strengthen donor lungs before transplantation. 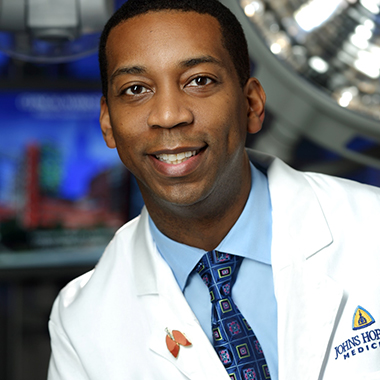 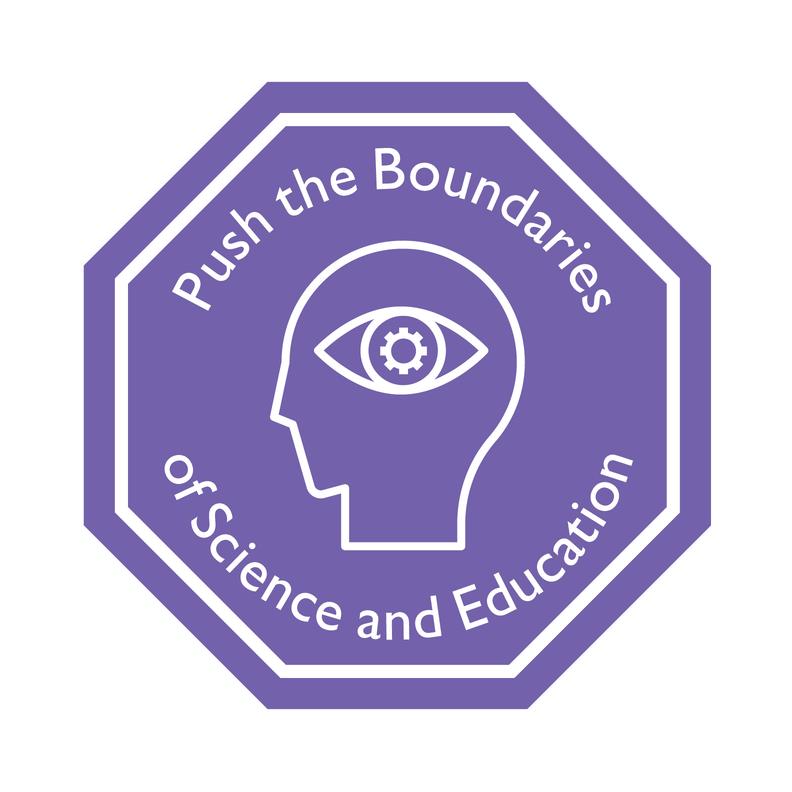