In 2018, when Brianna Fogelman first stepped into Errol Bush’s office to learn about her options for a lung transplant, the surgical director of the Johns Hopkins Advanced Lung Disease and Lung Transplant Program was struck by Fogelman’s warm smile — and her tenacity. “Seeing a young, minority student determined to have a successful nursing career was inspiring,” Bush says.

The next year, Fogelman became his 100th lung transplant patient in Baltimore. Before arriving at Johns Hopkins in 2017, Bush, a Georgia native, served on the faculty at the University of California San Francisco, where he performed more than 100 lung transplants.

His Johns Hopkins team is developing a program to strengthen donor lungs before transplantation in order to ensure that recipients can enjoy what Bush calls “a high quality of life.”

Working alongside him is transplant pulmonologist Pali Shah and the rest of a multidisciplinary transplant team that includes specialists such as nurses, social workers, nutritionists, pharmacists, therapists and psychologists. “The team aspect is one reason for our good outcomes,” says Bush. “We all round together and discuss any difference we might make in lung transplant recipients’ care, such as changing an antibiotic or immunosuppressant medication or giving patients a nutrition shake.”

Chuckling, Bush notes that he and many transplant patients are superstitious: “They’ve asked me to wear a certain color on the day of the surgery, or they’ll bring me special socks to wear.”

One request that had never been asked of him until earlier this year came from Fogelman. “She asked me to write a letter of recommendation for her,” he says, adding that he was more than happy to comply.

Post-transplant, patients must be followed for life. Many say transplant caregivers seem like a second family. Fogelman says she couldn’t agree more.

Watch a video in which Errol Bush describes his pioneering work to strengthen donor lungs before transplantation. 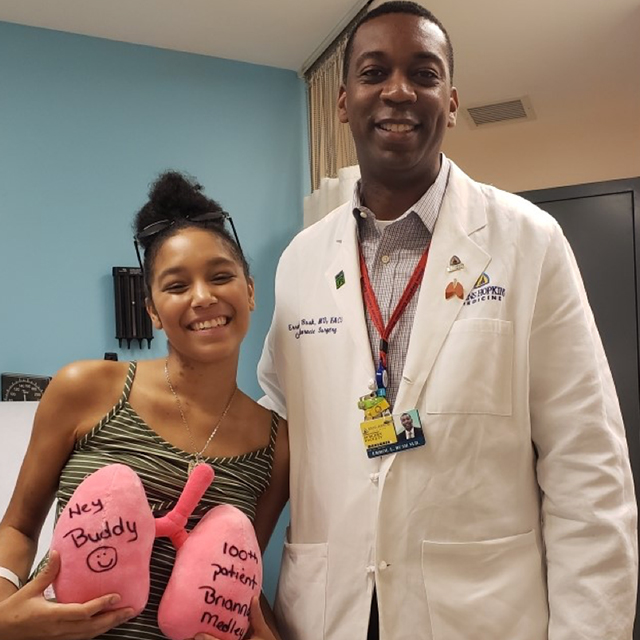 Lung transplant nurse now works at the hospital that saved her life.
back to top button