Assistant professors who are also juggling clinical and administrative duties can face a lack of time and funding for their research, which can slow their career growth in academic medicine. Jonathan Javitt, M.D., M.P.H., who was first appointed to the faculty at Wilmer by Arnall Patz, M.D., in 1987 and now serves on the adjunct faculty, wants to address this challenge with the Jonathan and Marcia Javitt Rising Professorship. It offers a seven-year program that will provide training and support to help accelerate the careers of Wilmer’s next generation of leaders.

“If we don’t implement formal mechanisms to support the most promising junior faculty members, our academic future will be far less rich than our academic past,” says Javitt, who is the CEO and chair of NRx Pharmaceuticals, a company that most recently developed aviptadil, an FDA-approved investigational new drug for COVID-19. “The key objective of the rising professorship program is to build resources within Wilmer to continue Wilmer’s global leadership for at least another century.”

In the 1990s, Javitt benefited from similar support when former Wilmer professor David Worthen, M.D., recruited him to lead the Worthen Center for Eye Care Research at Georgetown University Medical Center. (He continued to serve on the faculty at Wilmer while also on the faculty at Georgetown.) Javitt’s role at the center, along with financial support from the National Institutes of Health and private foundations, gave him the time and resources to conduct the first formal health economics and outcomes research in ophthalmology.

“Without that support and the intellectual freedom to innovate outside the conventional areas that were popular at the time, it’s unlikely I would have had those productive early years in my career,” Javitt says. He went on to become the first ophthalmologist to receive a Physician Scientist Award from the National Eye Institute, founded several companies and led a health information technology advisory committee under President George W. Bush.

The mentorship component of the rising professorships will be led by Henry Jampel, M.D., the Odd Fellows Professor of Ophthalmology at Wilmer and a member of the Glaucoma Division since 1988. Jampel will advise the rising professors on their research trajectory, developing a consistent voice as peer-reviewed authors, taking on national leadership roles and contributing to editorial boards.

“The idea is to get them to that next level in their careers much faster,” Jampel says. “This happens by giving them extra funds and protected time to further their research. And then we add in leadership courses to make them even better researchers and administrators.”

Cindy Cai, M.D., an assistant professor of ophthalmology at Wilmer, is the recipient of the Jonathan and Marcia Javitt Rising Professorship. She says working closely with Jampel is an important part of the program. “He’s very well-connected to lots of researchers at Hopkins, so he will be a very valuable resource to all of us,” says Cai, who specializes in the medical and surgical treatment of retinal diseases.

For her research, Cai is focused on how social determinants of health, like lack of insurance and transportation, lead patients with diabetes to have lapses in their ophthalmology care, which decreases the likelihood of prompt intervention and can lead to poor outcomes.

Currently, Cai is using data in the electronic medical record, as well as national data, to study these lapses in care for patients who have been diagnosed with diabetic retinopathy. Diabetic retinopathy is a condition that causes blindness and is expected to afflict more than 14 million people by 2050, according to the National Eye Institute. Cai is drawing from U.S. census data to leverage information on the neighborhood level, focusing on statistics such as the percentage of people who live below the poverty line and who own a car, to help predict which patients might have gaps in ophthalmology care.

“The idea is that hopefully in the future, we can highlight the population of patients with diabetes who are at high risk for a lapse in their care, and we can offer them support for their social needs,” says Cai, who was also a recipient of the Heed Ophthalmic Foundation Fellowship.

Cai was drawn to apply for a rising professorship because it will ensure more time can be devoted to research. She will also have the funding to hire a research assistant to help with analytics and potentially make her research progress even faster. “The rising professorship can only advance our careers more quickly,” Cai says. “It’s a huge opportunity for all of us.” 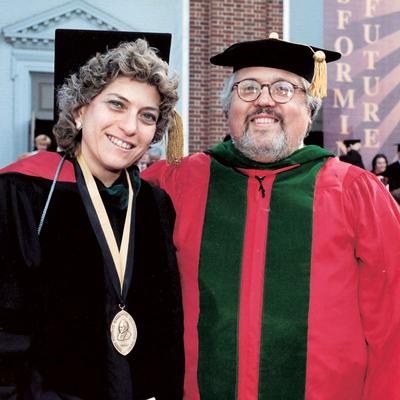 Marcia and Jonathan Javitt
back to top button