As a genetic epidemiologist, Mathias searches for the risk factors that contribute to common diseases. Those risk factors can be used to predict the likelihood that a person will be stricken with a particular condition as well as the severity of their illness. They can also be exploited to develop and prescribe interventions (therapeutics, lifestyle changes) targeted at an individual’s personal genetic makeup.

Yet early in her career, Mathias recognized a troubling paradox: The populations that are most likely to be afflicted by common ailments such as asthma, diabetes and cardiovascular disease — specifically, people with African ancestry — are also the least likely to be included in genetic studies at home and abroad.

“We have a significant problem: Globally, things are not equal,” says Mathias, who earned her doctorate at the Johns Hopkins Bloomberg School of Public Health and is now a professor of medicine.

For the better part of two decades, Mathias has dedicated her work to erasing those twin inequalities: the disproportionate burden of disease borne by populations of African descent, and their exclusion from the very studies that could help ease that burden.

In the process, Mathias has discovered ancestry-specific genetic variants linked to everything from allergy and inflammation to stem cell mutations and high blood sugar. Her work has paved the way for better genetic screening tools, pointed toward new targets for drug development and extended the promise of personalized medicine to all.

Now Mathias wants to bring that same approach to the study of aging.

Her goal is to use genomics to predict who is likely to suffer poor age-related health outcomes in a world where people are living longer than ever, and where age-related conditions such as frailty and dementia consequently exact an ever-mounting toll on individuals and society.

“The human population is aging, and the major gap right now is the inability to predict risk,” says Mathias, who was named a Human Aging Project Scholar last year by the Johns Hopkins Center for Innovative Medicine.

In time, however, a precision approach to aging that can be applied successfully across diverse populations will help ensure that everyone, regardless of race and ethnicity, can stay as healthy as possible for as long as possible.

For Mathias, using epidemiology and risk prediction to improve the health and well-being of diverse populations is deeply personal.

Born and raised in India, Mathias was only 4 years old when her father died from cardiovascular complications of uncontrolled diabetes. Eight years later, her mother suffered an asthma attack so severe that she had to be hospitalized. Not long afterward, Mathias’ grandfather, aware of his granddaughter’s burgeoning interest in biology, handed her a magazine article about the genetics of asthma.

The die was cast.

“It’s been genetics for me all along,” she says.

As a doctoral candidate, Mathias led a study that explored the genetic determinants of asthma among a group of Afro-Caribbean families in Barbados. It would prove to be the first in a long line of genetic investigations with an explicit multiethnic emphasis.

The need for such work remains pressing.

“The vast majority of what we know about human genetics comes from populations of European descent,” says population geneticist Chris Gignoux, a longtime collaborator at the University of Colorado at Denver. “If we really want to understand the genetic basis of diseases like asthma that disproportionately affect certain populations, then we need to look into those populations to have a full picture of what’s going on.”

Not including those populations is both inequitable and hazardous. Because certain genetic variants are more likely to occur among members of specific ethnic or racial groups, focusing exclusively on people of European descent can mean missing them altogether. That, in turn, hobbles the ability of researchers and clinicians to screen for specific diseases or assess risk among particular groups.

In 2019, for example, Mathias co-authored a study demonstrating that people of African or Hispanic ancestry are more likely to carry a rare genetic variant that lowers blood sugar levels. Since blood sugar concentration is widely used to diagnose diabetes, the condition could be underdiagnosed in those groups — despite the fact that they are more likely to suffer from it.

“If you’re going to provide that service, then it has to work for anyone who walks into the clinic,” Gignoux says.

Mathias has pushed to diversify the populations included in genomewide association studies, which are used to search for correlations between hundreds of thousands of common genetic variants and widespread diseases. As leader of the Consortium on Asthma among African-Ancestry Populations in the Americas (CAAPA), for example, she pioneered the analysis of genetic material from people across the African diaspora and helped develop new and powerful tools for identifying African-specific genetic variants.

Now, she has turned her attention to rectifying the inequalities that have characterized research
on aging.

As a first step, Mathias is revolutionizing the study of telomeres: the protective caps on the ends of our chromosomes that prevent our DNA from deteriorating, much like the plastic caps at the ends of your shoelaces that prevent them from fraying.

Because telomeres become shorter as we grow older — and because shortened telomeres have been implicated in a wide range of diseases — they could play an important role in understanding the fundamental mechanisms of aging; predicting the risk of age-related decline; and developing and targeting interventions to slow, arrest or even reverse it.

Unfortunately, getting consistent and reliable measurements of telomere lengths from population-scale samples using traditional laboratory methods has proven to a be a challenge, hindering epidemiological studies of aging and telomere lengths.

“It’s been a very difficult area to work on,” says Johns Hopkins associate professor of medicine Peter Abadir, a geriatrician and fellow Human Aging Project Scholar who studies the molecular changes that lead to physical frailty and cognitive decline.

Over the past three years, however, Mathias has developed a big-data approach to accurately measuring telomere lengths on a massive scale — though that was not, in fact, the problem that got her interested in telomeres to begin with.

Not long ago, Mathias stumbled across a handful of references to research suggesting that African Americans might have longer telomeres than people of European descent. Yet the findings were both inconsistent and counterintuitive. As she dug deeper, Mathias experienced the shock of recognition: Almost no one, it turned out, was actually doing research on telomere genetics among populations of African descent.

“It hit me like a thunderbolt,” she says. “Here was yet another place where genetics was not doing a good job across these groups with significant health disparities.”

Whole-genome sequences contain all 3.5 billion base pairs in an individual’s DNA — including the ones that comprise telomeres. Working with an international team of collaborators, Mathias and Margaret Taub, a colleague at the Bloomberg School of Public Health, leveraged TOPMed data from approximately 110,000 individuals of various ethnicities to refine methods for accurately calculating telomere lengths from whole-genome sequences. This bioinformatic approach to telomere measurement has freed the researchers from the limitations of traditional lab techniques, allowing them to “read” telomere lengths at scale.

Mathias and her colleagues are now using their newfound knowledge of telomere lengths and genetics to better understand the mechanics of aging. Postdoctoral fellow Rebecca Keener, for example, has already found evidence that genetic determinants of shorter telomere length are associated with increased expression of a gene that has been implicated in cancer.

Mathias hopes to use such discoveries to develop a telomere-based polygenic risk score for age-related health outcomes. Based on dozens of telomere-related genetic variants, such a score could be used to predict the risk of age-related decline among people of diverse ancestries and target them for early, ancestry-specific interventions — a fitness regimen, dietary changes, maybe even a particular medication — tailored to their genomic profile.

The power of a precision medicine approach to aging will depend in large part on a comprehensive understanding of the various mechanisms through which a person’s genome influences their health. So Mathias is working to further integrate genomics with all the other “omics” that define our biology at the molecular level, from gene expression (transcriptomics) to proteins (proteomics).

She and Abadir, for example, are currently engaged in an effort to tease out the relationship between physical and cognitive decline in older adults and other, nontelomeric biomarkers of aging such as proteins associated with chronic inflammation.

“There are other parts to the puzzle,” Mathias says. “If I want to do this well, I’ve got to bring them all together.”

The science of telomeres made international headlines in 2009, when Johns Hopkins molecular biologist Carol Greider received the Nobel Prize for Physiology or Medicine for her pioneering research on their structure. Together with Elizabeth Blackburn and Jack W. Szostak, Greider discovered that telomeres are protected from progressive shortening by the enzyme telomerase — an enzyme she discovered in 1984 while a graduate student in Blackburn’s lab.

Greider joined Johns Hopkins in 1997 and served for many years as the Daniel Nathans Professor and director of molecular biology and genetics. In 2014, she was named a Bloomberg Distinguished Professor. Greider left Johns Hopkins last October to join the University of California, Santa Cruz as a distinguished professor of molecular, cell and developmental biology. 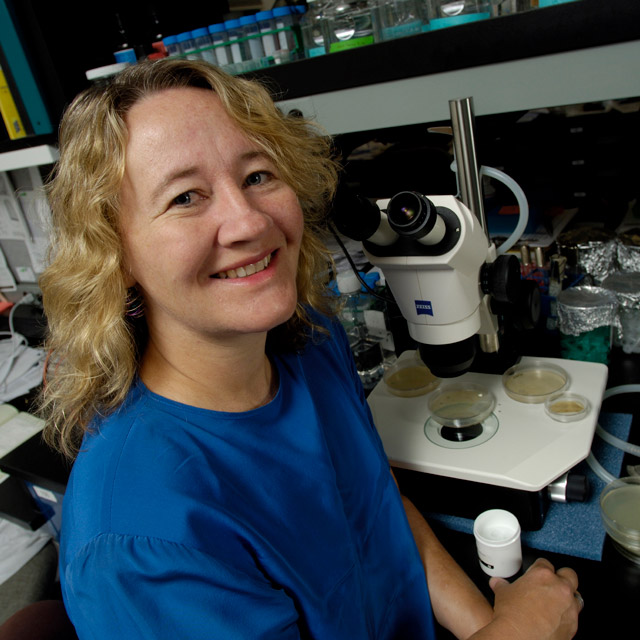 Carol Greider
back to top button