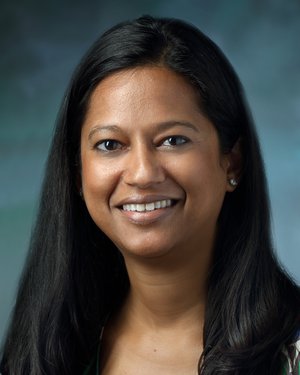 Genetic epidemiology with emphasis on cardiovascular/asthma/lung disease and other chronic disease processes.

Dr. Rasika Mathias, ScD, is an Associate Professor of Medicine in the Division of Allergy and Clinical Immunology. She maintains a joint appointment in the Division of General Internal Medicine at the Johns Hopkins School of Medicine as well as the Department of Epidemiology at the Johns Hopkins Bloomberg School of Public Health. She is a formally trained Genetic Epidemiologist with a particular emphasis on the genetics of quantitative traits underlying disease phenotypes in the context of family-based designs and health disparities. She obtained her Bachelors of Science in Zoology at Stella Maris College in India and her ScM and ScD in Genetic Epidemiology at the Johns Hopkins Bloomberg School of Public Health. Dr. Mathias underwent her postdoctoral training at the National Human Genome Statistical Geneticist with an emphasis on quantitative trait genetics in the family based design and was recruited as an Assistant Professor of Medicine to The Johns Hopkins School of Medicine in 2009. Dr. Mathias is currently building a program on Next Generation Sequencing approaches to dissecting the genetics of complex diseases with an emphasis on populations of African ancestry focusing on three specific areas of research all tied together by the comment thread of sequencing as a tool to investigate genetic determinants of traits that underlie complex disease in the context of health disparities described under her Current Research.

Dr. Mathias also works with a team of premier researches involved in the study of coronary artery disease though the GeneSTAR Program. The GeneSTAR program aims to discover and amplify mechanisms of atherogenic vascular diseases and attendant comorbidities though a large family-based design and Dr. Mathias is specifically leads a family-based whole genome sequencing study of both European American and African American families to extend the previously done genomewide associations studies on platelet aggregation in these families at higher risk for CAD. As part of her R01, the team will be sequencing >260 individuals with platelet hyper-aggregation from these families followed by targeted next generation sequencing of implicated regions in >1300 additional family members.

As further extension to her research of health disparities, Dr. Mathias has extensive interest in the role of genetic variants in poly-unsaturated fatty acid (PUFA) metabolism. Alongside researchers at Wake Forest University, she has demonstrated the role of selective pressures in the present populations differences at key genetic variants in the fatty acid desaturase (FADS) cluster on chromosome 11q12-13. Dr. Mathias and her team have argued that striking differences in the frequency of genetic variants that predispose an individual to enhanced long-chain PUFA metabolism may explain in part the dramatically higher levels of LC-PUFAs in populations of African ancestry within the US, and therefore play a strong role in the resulting differences noted in chronic diseases of inflammation in African Americans in the US.