Daniel B. Drachman, internationally recognized neuroscientist and founding member of the Johns Hopkins Department of Neurology, dies at 90 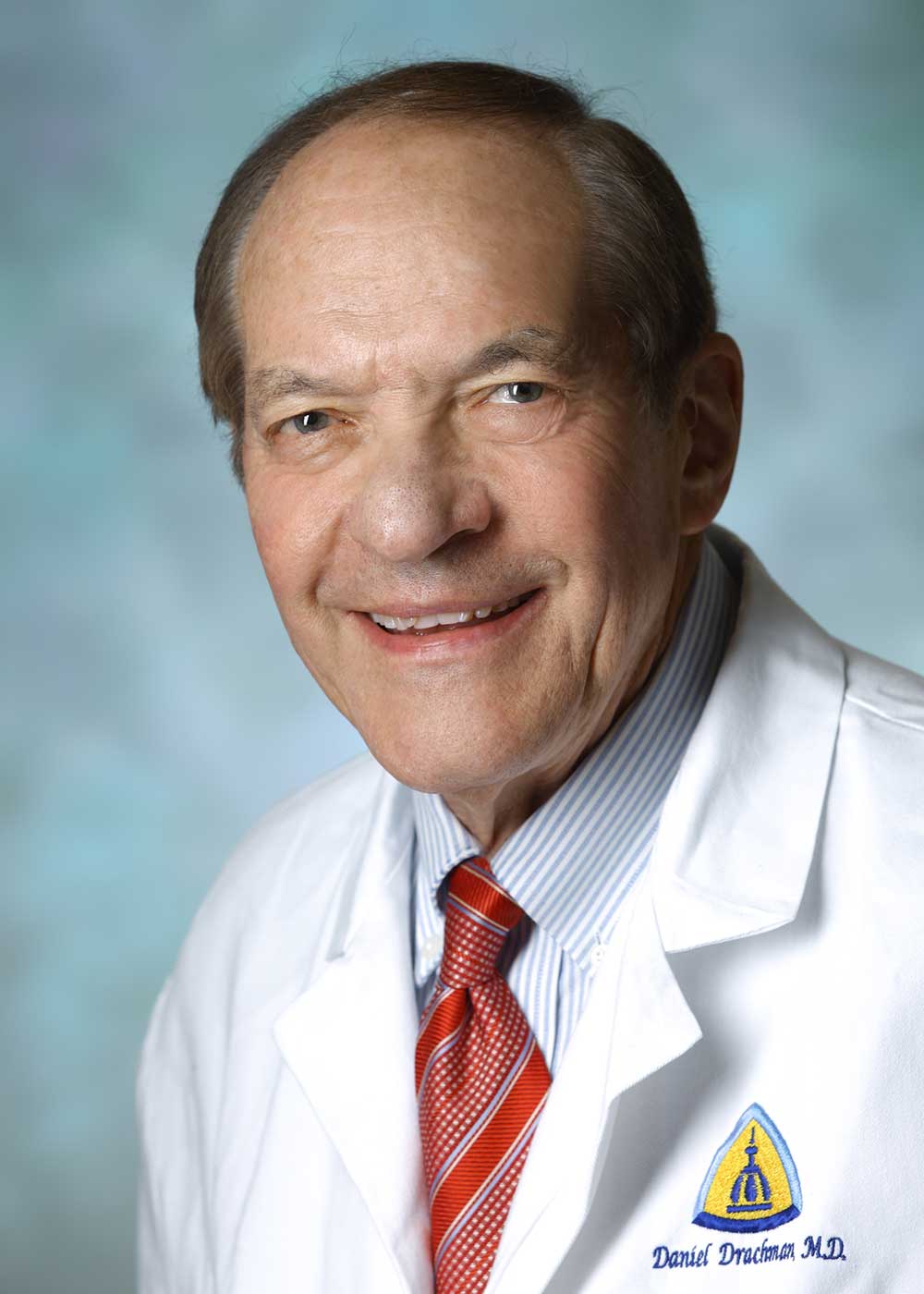 It is with great sadness that I share with you the news that Daniel B. Drachman, a world-renowned Johns Hopkins neurologist and neuroscientist whose landmark discoveries formed the foundation for much of today’s research and treatment of neuromuscular diseases, died on Oct. 24. He was 90.

Drachman was a leading authority on myasthenia gravis and other neuromuscular diseases. His four decades of findings on myasthenia gravis, which he determined was an autoimmune illness in which the body’s immune system attacks the nerve receptors in muscles, has transformed it from a frequently fatal disease into a highly treatable one. Research he began on the botulinum toxin in the 1970s also led to the development of Botox as a clinical treatment for neuromuscular ailments.

One of the founders of the Johns Hopkins Department of Neurology when it opened in 1969, Drachman was the first head of its neuromuscular laboratory and program, of which he was chief for 30 years. He trained more than 50 clinical scientists and basic researchers, many of whom became leaders in neuromuscular studies and patient care.

Born in 1932, he received his M.D. degree at New York University School of Medicine in 1956, and with his twin brother David trained in Neurology. He became the leading authority on myasthenia gravis and other neuromuscular diseases. He was the first to show that myasthenia gravis is an autoimmune condition mediated by autoantibodies. This discovery paved the way for using plasmapheresis as the first highly effective treatment in myasthenic crisis. He also tested and introduced novel immuno-therapeutic strategies in the treatment of severe myasthenia. Using botulinum toxin many years before it was introduced for clinical use, he also showed that botulinum given to chick fetuses mimicked the human disease arthrogryposis congenita. These observations demonstrated that muscles wasted when deprived of motor neuron stimulation. It also proved a principle important in the pathogenesis of motor neuron diseases such as ALS and in muscle disorders. In Duchenne muscular dystrophy he was the first to show that corticosteroids could ameliorate muscle weakness.

Drachman’s work helped propel neurology into its modern, science-based age, with Johns Hopkins leading the way. He and the other founding members of the Johns Hopkins neurology department increased the faculty dramatically by recruiting outstanding, talented young neuroscience researchers and establishing a postdoctoral training program that is considered among the finest in the country. Additional research and training programs were developed in stroke care, neuro-oncology, neuropathology, epilepsy, genetics, neuro-intensive care and cognitive neuroscience.

An outstanding teacher, mentor and lecturer, he has received many honors and awards including the 2002 Lifetime Achievement Award from the World Federation of Neurology and in 2022 the Johns Hopkins University Distinguished Professor title. In 2014 he was elected to the National Academy of Medicine, one of the highest honors in the fields of health and medicine.

Many of his former post-docs in the Neuromuscular Division became neuromuscular specialists and clinician scientists. When mentoring he not only insisted on finding solutions to an important problem but also taught his mentees how to structure research work: approaching obvious enigmas by detailed analyses and by utilizing the exchange with scientists in neighboring fields. In brief, DBD was a role model of a clinician scientist in the neuromuscular field.