Our program offers patients two types of clinical trials: ones that explore new ways to treat ALS, and ones that aim to learn more about the disease. Both types of studies are equally important to our mission to ultimately uncover pathways to prevent ALS in the first place. 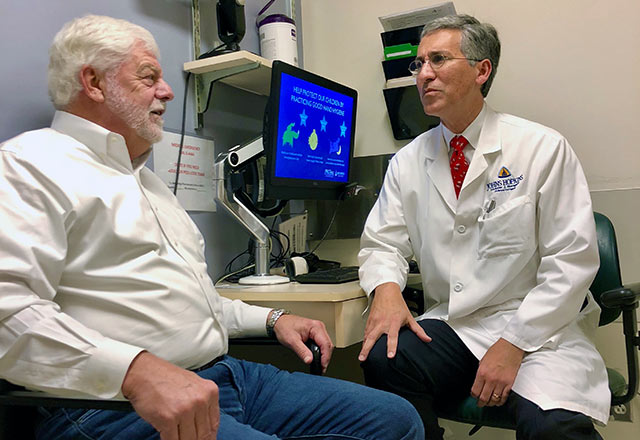 Bringing treatment to ALS patients is the main mission of this program’s efforts. Our goal is to enroll all potential ALS patients into clinical trials that could help slow, halt, and eventually improve ALS. These therapies can take the form of traditional medications taken in pill form or by injection, but have also included gene therapy studies and the study of medical devices.

The HEALEY ALS Platform Trial is a research trial that tests the safety and effectiveness of multiple ALS regimens. A regimen is a specific course of treatment, each with a different study drug.

Multiple different regimens may be active within the platform trial at the same time. If you qualify for the platform trial, you will be randomly assigned to a regimen (one treatment). You will have an equal chance of being assigned to any active regimen. However, if you complete a regimen and then choose to participate in another regimen, you will not be randomized to your first regimen again.

A Phase 3b Multicenter, Randomized, Double-Blind Study to Evaluate Efficacy and Safety of Oral Edaravone Administered for a Period of 48 Weeks in Subjects with Amyotrophic Lateral Sclerosis (ALS) (MT-1186-A02)

The intravenous form of edaravone has been approved by the FDA as a treatment for ALS since 2017. Its commercial name is Radicava. This study is to test if the oral version (a liquid solution you swallow) is safe and well tolerated in patients with ALS. Its effects will be compared in two different ways. One group will be given the study drug every day during the trial, and the other will be given the drug and a placebo on alternating cycles. (First cycle: 14 days of drug and 14 days of placebo. Second-twelfth cycles: 10 days of drug and 18 days of placebo). Neither you nor the study team will know to which group you are assigned.

The Summit Study will test a specific, fully-implanted brain-computer interface (BCI), the Medtronic Summit System, for patients with chronic locked-in syndrome, a disorder in which communication is impaired by paralysis. The goal of the study is to assess this particular BCI’s ability to safely assist with communication. Participants must undergo surgery to implant electrodes onto the surface of the brain and a wireless transmitter under the skin of the chest. Participants will train and test (for up to 4 hours each day, two days per week for a full year) with the BCI to control assistive typing technology and trigger a care-giver calling alert at their own home. Participants must be able to travel to The Johns Hopkins Hospital several times a week. More about this study.

A Phase 2b/3, Multi-Center, Randomized, Double-Blind, Placebo-Controlled, 12 Month Clinical Trial to Evaluate the Efficacy and Safety of MN-166 (Ibudilast) followed by an Open-Label Extension Phase in Subjects with Amyotrophic Lateral Sclerosis

Ibudilast is being investigated as a potential new therapy to slow the progression of ALS. Ibudilast is thought to have neuroprotective effects by working against nervous system inflammation. Ibudilast is a capsule, taken orally. This study has a 1:1 ratio of study drug to placebo. This study has a 12 month double-blind phase, followed by a 6 month open label extension period. Patients who enroll in this study must also be taking the approved ALS drug Riluzole (Rilutek®). Patients taking the approved ALS drug Edaravone/Radicava® are not eligible for this study.

Ibudilast, developed by MediciNova, acts as a nonselective phosphodiesterase inhibitor and has been used as an anti-asthmatic medication, as it reduces release of leukotrienes, cytokines and other molecules involved in bronchospasm. It also modulates survival and activation of immune cells in the CNS by preventing the production of pro-inflammatory agents from microglia. It also modulates release of migration inhibitory factor (MIF).

A Phase 3, Multi-Center, Double-Blind, Randomized, Placebo-Controlled Trial to Evaluate the Efficacy and Safety of Reldesemtiv in Patients With Amyotrophic Lateral Sclerosis (ALS)

Reldesemtiv is an investigational drug candidate intended to slow the rate of calcium release from the regulatory troponin complex of fast skeletal muscle fibers. Contraction of skeletal muscles is driven by the sarcomere, the fundamental unit of muscle contraction, which contains myosin, a protein which converts chemical energy into mechanical force through its interaction with another protein, actin. This interaction is regulated by other proteins including troponin and tropomyosin, and is dependent on changes in calcium. By slowing the rate of calcium release, reldesemtiv sensitizes the sarcomere to calcium, leading to an increase in muscle contractility.

Tofersen (also called BIIB067) is currently being evaluated in adults for the treatment of ALS associated with a mutation in the SOD1 gene. The optimal timing for initiation (i.e., prior to or after the emergence of clinically manifested disease) of tofersen is unknown. Other neurodegenerative diseases, such as Alzheimer’s disease and Parkinson’s disease, are understood to have presymptomatic phases in which there may be abnormalities detected by biomarkers, without overt clinical signs or symptoms, but more research is required to determine and characterize the presymptomatic phase in ALS. This study will evaluate the impact of initiating tofersen based on biomarker evidence of disease activity, prior to the emergence of clinical symptoms or signs that definitively indicate ALS. It is hypothesized that initiation of tofersen in presymptomatic SOD1 carriers will delay the emergence of clinically manifested ALS, and/or slow the decline in function once symptoms are observed compared to the initiation of tofersen at the time of, or after, emergence of clinically manifested ALS.

Masitinib, developed by ABSciences, is a selective tyrosine kinase inhibitor with neuroprotective capability, demonstrated via numerous preclinical studies. It is a twice-daily, oral study drug that is thought to reduce inflammation in specialized brain cells called microglia and mast cells that are affected in people with ALS. This is a phase 3 study. It includes three groups: two groups of different dose strengths and one placebo group. Participants must have had symptoms of ALS for less than 2 years and must be taking Riluzole. 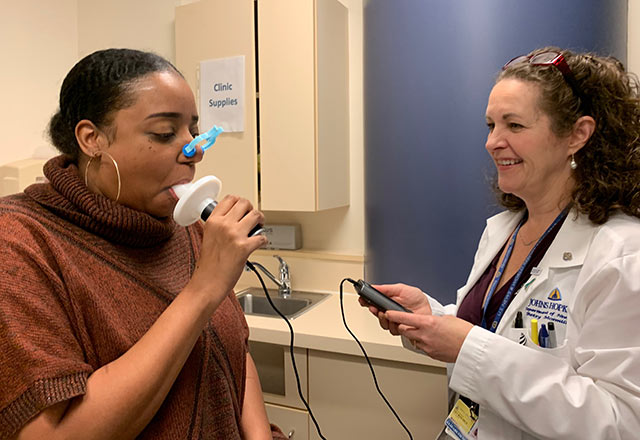 Our greatest limitation to treating Amyotrophic Lateral Sclerosis (ALS) is the lack of understanding what causes or enables sporadic ALS. However, Johns Hopkins researchers are uncovering powerful discoveries for this progressive disease. These discoveries start in research laboratories across the institution as well as collaborations with investigators across the globe.

This is a Phase 1 study of safety and tolerability of an investigational radiotracer drug called [5-cyano-N-(4-(4-[11C]Methylpiperazin-1-yl)-2-(Piperidin-1-yl)Phenyl)Furan-2-carboxamide] ([11C]CPPC). A radiotracer is a substance that chemically marks certain structures in the body. In this case, [11C]CPPC highlights structures expressing colony stimulating factor receptor (CSF1R), a receptor that is expressed on microglial cells. A safety and tolerability study is looking to see if there are any unanticipated, possibly harmful, effects of the use of the radiotracer in humans. However, ultimately, the investigators would like to know if this drug can be used to make better images of the brain for patients with amyotrophic lateral sclerosis (ALS), which could help doctors better understand the disease and help take care of patients with ALS. This study will use a radiotracer to look for a chemical receptor which ALS patients have more of in the brain. After receiving the radiotracer, participants' brains will be scanned with a positron emission tomography (PET) imaging machine.

This is an observational study in which participants will be followed from prior to starting Radicava through 6 months of treatment. Biomarkers from blood and urine will be collected and analyzed to help better understand Edaravone’s effect on disease progression and its mechanism of action.

For a complete list of open clinical trials across Johns Hopkins, visit the database at the Institute for Clinical and Translational Research. You can search by condition, researcher or doctor’s name.