Sexually Transmitted Diseases: A Hidden Epidemic in the United States and Beyond 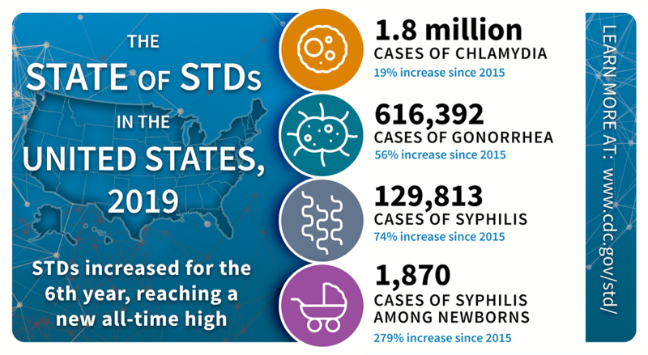 The need to develop sensitive, specific, and more easily available point-of-care (POC) technologies for diagnosing sexually transmitted diseases (STDs) is critical. Five of the top ten reportable diseases in the United States are STDs. CDC data indicate that in 2018 in the United States, a combined total of nearly 2.5 million new cases of chlamydia, gonorrhea, and syphilis were reported. The global incidence of four curable sexually transmitted diseases (chlamydia, gonorrhea, syphilis, and trichomoniasis) is estimated at over 357 million cases. Many cases go undiagnosed and untreated.

Young people (ages 15-24) are particularly affected, accounting for half of all new infections. Some of these sexually transmitted infections (STIs) have the potential to cause serious health problems, especially if not diagnosed and treated early. Stigma, privacy, and confidentiality issues make STDs/STIs optimal areas for point-of-care tests at healthcare facilities and for over-the-counter tests performed at home.

At the Center for Point-of-Care Technologies Research for Sexually Transmitted Diseases, our mission is to develop and test the accuracy, acceptability, and optimal implementation of point-of-care tests for sexually transmitted diseases in diverse care delivery contexts both in the United States and in resource-limited settings.

Located in the Division of Infectious Diseases of the Johns Hopkins University School of Medicine, the Center brings together a dedicated and experienced group of faculty and staff who are committed to stopping the epidemic of Sexually Transmitted Diseases. In addition to personnel from Johns Hopkins, the Center includes scientists and staff from the Cincinnati Children's Hospital Medical Center (CCHMC) and the Infectious Diseases Institute (IDI) in Kampala, Uganda. We are part of the Point-of-Care Technologies Research Network (POCTRN) which was created by the National Institute of Biomedical Imaging and Bioengineering (NIBIB) in 2007. We are funded through a grant from NIBIB.

January 2021
The Centers for Disease Control and Prevention released new estimates that 1 in 5 people in the U.S. have an STI. Young people ages 15-24 are especially impacted. Read more about STI prevalence, incidence, and costs.

Developing Point of Care Tests for Sexually Transmitted Diseases: An Opportunity for Industry

Listen to what some experts say about the need for point-of-care testing for sexually transmitted diseases.