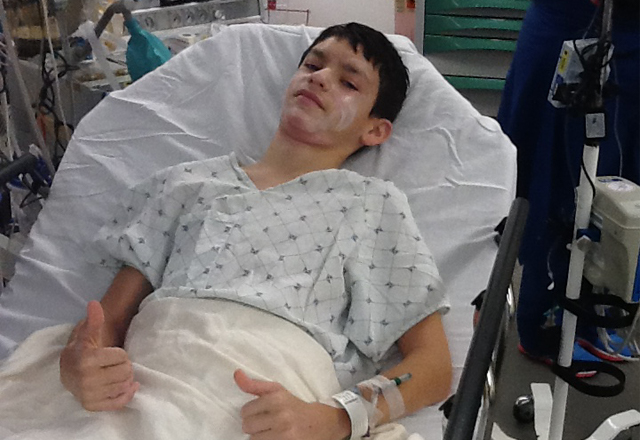 Thrilled that school was finally out for winter break, 11-year-old Tyler asked his parents, Tom and Kellie, if he could attend a Christmas party at a friend’s house that night. When he got there, the children started a bonfire. Tyler watched as his friend lit a fire-starting log and poured gasoline on it. The fire caught the fumes inside the gas can — causing it to explode. The blast blew both Tyler and his friend back, and they caught on fire.

“I tried to stop, drop and roll, but we were covered in gasoline, so the fire wouldn’t go out,” recalls Tyler. “I didn’t know what to do, and I could just see a ring of fire around my face. I was scared I was going to die, but I rolled down a hill and luckily, there was snow on the ground that put out the flames.”

At their house across town, Kellie and Tom received the phone call every parent dreads: Their child has been in an accident. He was severely burned and needed to be airlifted to Johns Hopkins Children’s Center.

“People talk about these phone calls coming and you don’t think it’s going to be you that gets it,” Tom says. “In the middle of it, you’re in total shock, like you can’t believe it’s happening.”

Panicked and not knowing what to expect, Kellie and Tom rushed to the friend’s house, but they weren’t able to get close because of all the commotion. They met Tyler at the ambulance, which immediately drove the boy and his mother to a nearby community college for a helicopter transport. Kellie remembers the shock at seeing that not only was Tyler covered in blisters, but the fire had also singed his hair and burned off his eyebrows and eyelashes.

When he arrived at Johns Hopkins Children’s Center, doctors took Tyler to a trauma room to treat the burns on his arms, face and legs — the burns covered nearly a quarter of his body. After surgery to clean his wounds, doctors admitted Tyler to the PICU where he stayed for one night until they removed his breathing tube.

“The worst part of all of this was the daily two-and-a-half-hour dressing changes,” Kellie says.

“As a mother, there was nothing I could do to help him. I felt helpless and it was awful.”

During his 17-day stay at the Children’s Center, Tyler underwent four surgeries, including skin grafts on his legs. His parents noticed an immediate improvement after the skin grafts. Tyler started walking again.

After being discharged, Tyler returned to Johns Hopkins Children’s Center for a short stay to deal with complications on the donor site. Over the next year, he also would return for monthly follow-up appointments to evaluate the healing of the skin grafts.

Now 17 years old, Tyler has made a full recovery and is enjoying his senior year of high school. He plays soccer and lacrosse and wants to become a civil engineer.

“We are so thankful that we have a place like Johns Hopkins Children’s Center so close to us, otherwise it could have been so much worse,” Kellie says. “You never know when something is going to happen. It could happen to anyone at any time.”