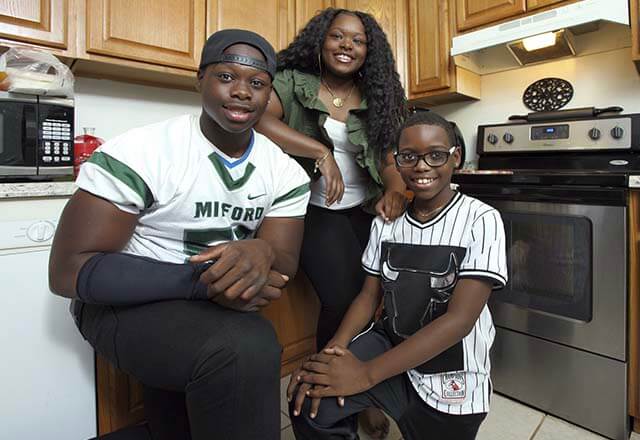 On a December snow day, 14-year-old Taurian was upstairs at home playing a video game when he smelled smoke. He knew his sister was making something to eat, so when he heard the fire alarm he rushed down to the kitchen. There he was accosted by smoke and saw flames on the stove. Taurian told his brother and sister to grab their dog, Misty, and get outside. Taurian picked up the pot that was on fire, planning to throw it out the back door.

“By the time I got to the door, it was already open and the wind blew flames up my arm,” Taurian says. “I threw the pot, but also slipped in the grease and my leg caught on fire. I didn’t even think about me, I just wanted to make sure my brother and sister were OK.”

His sister, Kamarie, called 911 and his parents, Tammy and Edward, hurried home. Taurian was rushed by ambulance to Johns Hopkins Children’s Center. Despite sustaining burns over 29 percent of his body—he had third degree burns on his right leg from the hip all the way down to his toes, on his left leg from above the knee down to his foot, and on his right arm from the wrist to inner elbow—Taurian told his parents not to worry.

Taurian’s burns were  assessed and he was told that he would need immediate surgery to remove burned tissue from the deep wounds on his legs. The surgery, the first of five, went well, but Taurian’s biggest fear was that his injuries would prevent him from ever reuniting with the love of his life: football.

Tammy did not leave for the duration of Taurian’s stay in the hospital—a total of 37 days.

“Seeing your son in that much pain is hard,” Tammy says. “There were several moments I cried, but I tried to keep it together for Taurian. As long as he was being strong, I had to be too.”

After being discharged, Taurian had to learn how to walk again—needing to gain back a significant amount of leg muscle. Determined to return to his football team by the start of his sophomore season, Taurian focused on physical rehabilitation.

Where did he find the strength? Tammy pointed to Taurian’s mantra, “Trust the process”— the slogan on the back of his high school football shirt, the one he was wearing the day of the kitchen fire.

“Whenever he felt down or doubted himself, he would remind himself to trust the process, and then things will eventually get better,” says Tammy.

Last summer, he began to participate in team workouts and practices, and in the fall, Taurian was back in uniform on his high school football field. Taurian hopes to one day become a professional football player.

“The staff at Johns Hopkins Children’s Center was absolutely awesome,” says Tammy. “They’ve become like a second family to us.”