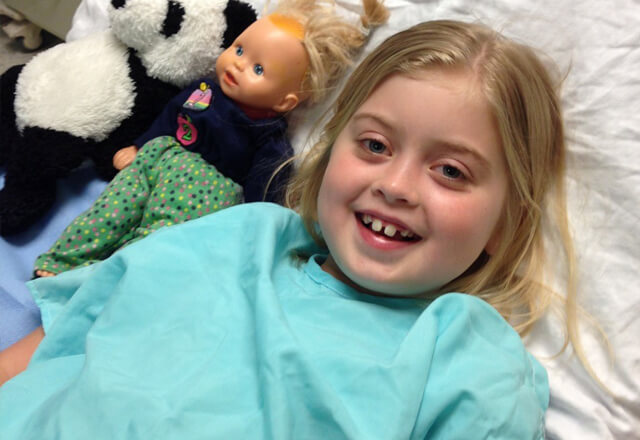 John and Carrie were concerned when they noticed their baby, Sarah, had stopped growing. In the sixtieth percentile for weight at her six-month checkup, Sarah dropped to zero percentile at her year checkup.

Her local doctors in Virginia and Washington DC ascribed her “failure to thrive” to her inability to swallow thin liquids, which caused chronic aspiration. For the next two years, they instructed John and Carrie to thicken all her foods, in an attempt to get nourishment into her.  While Sarah did start growing at healthy rate, she was in severe pain and would get sick a lot. Doctors insisted that she would outgrow her swallowing issues.

In 2009, when Sarah was 2 ½ years old, her parents brought her to the Johns Hopkins Children’s Center for a second opinion. Johns Hopkins pediatric specialists immediately recognized the severity of the child’s health condition. They diagnosed a hole in her airway, a laryngeal cleft, and closed it with surgery, just three weeks before she turned 3 years old.  Sarah could then drink water without choking, but the pain in her stomach continued to worsen.

After two years of testing and doctors trying to find the source of the pain, Johns Hopkins physicians discovered and repaired her rare form malrotated intestines that did not show up on testing. In the years since, Sarah has undergone multiple surgeries at Johns Hopkins Children’s Center for multiple conditions, including chronic lung disease, a consequence of her early years of continued, unchecked aspiration.

“I knew we needed to come to the Johns Hopkins Children’s Center, and I’m so glad we did,” says Carrie. “The doctors and nurses here are persistent, they never give up on Sarah and are dedicated to making sure that she is healthy and growing and pain free. We continue to drive to Baltimore from Virginia because this is where she needs to be.”

Today, Sarah is full of joy and does not let her medical conditions stop her from living her life. Each year, she runs in the Baltimore Running Festival with her family, fundraising for the Johns Hopkins Children’s Center.