Lucy: The Queen of 9 North 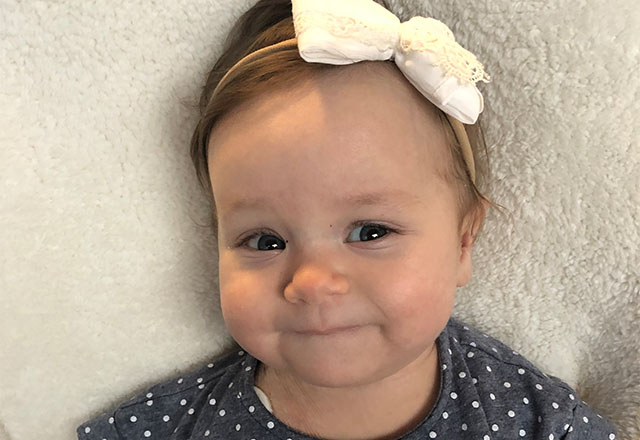 Lucy’s mom, Chelsea, had a relatively normal and issue-free pregnancy up until she went in for her final appointment. Her doctor noticed that Lucy had low amniotic fluid and enlarged kidneys, and decided it was best for her to be born that day. After the birth at a local hospital, Chelsea and Jon, Lucy’s dad, were shocked to find out that Lucy needed to be transferred to Johns Hopkins Children’s Center immediately.

When 1-day-old Lucy arrived at the Children’s Center, Chelsea and Jon met with pediatric nephrologist Tammy Brady and they instantly knew they were in the right place. Dr. Brady explained that because Lucy kidneys were cystic, she would need dialysis and, eventually, a kidney transplant.

Two weeks later, doctors diagnosed Lucy with kidney failure, and she underwent surgery to place a peritoneal dialysis (PD) catheter, a central line and a g-tube. After the surgery, she needed to grow and reach a weight that would make the next step in her treatment possible: a kidney transplant.

Lucy had to be at least 2 years old and weigh 20 pounds for a kidney to fit inside her tiny body. But the day before her first birthday, she got a fungal infection and her PD catheter needed to be removed. Lucy then started hemodialysis in the pediatric dialysis unit.

“This type of dialysis is what most people think of, where you’re hooked to a machine and it cleans your blood,” Chelsea says. “It’s especially difficult for a young child because it takes hours and needs to be done every day.”

Lucy’s doctors and parents then realized that Lucy had stopped growing. According to her mom, she “tapped out” at 16 pounds, just 4 pounds shy of the weight needed to receive a transplant.

Her parents then met with Niraj Desai, surgical director of the Johns Hopkins pediatric kidney transplant program, to see just how serious the 20-pound weight requirement was. Dr. Desai determined he could remove one of Lucy’s kidneys and make enough room for a new one.

Testing showed that Chelsea’s kidney was a better match than Jon’s kidney, and a date for the surgery was set. Eight days before the procedure, Chelsea received a call from Brady while driving home from the hospital.

“Dr. Brady said, ‘Are you sitting down? We have a perfect-match deceased-donor kidney for her and it’s coming right now,’ and I could not believe it,” Chelsea says.

That night, Lucy became the youngest and smallest recipient of a kidney transplant at Johns Hopkins Children’s Center. The surgery began at 2 a.m., and her parents couldn’t do anything but worry and let their minds wander.

“That time in between when she had gone in for transplant and until we got the update that she was OK was probably the hardest part of this whole thing,” Jon says.

Although her surgery went well, Lucy suffered a seizure while in recovery. She was intubated, given countless medications because of the transplant, and had to sit with an electroencephalogram, or EEG, on her head to monitor her brain activity.

Unlike other organs, it takes time for kidneys to begin working after a transplant. It can be days before doctors can tell if a donor kidney functions the way it’s supposed to. For Lucy, it was two and a half weeks until her new kidney began to work. Her mom says that as soon as she saw Lucy had a wet diaper, she knew the transplant had been successful.

Lucy regularly returns to the Children’s Center for follow-ups, and every time they visit, her parents are reminded that they ended up in the right place for their daughter. The faculty and staff that cared for Lucy are like family now. The nurses on her unit even refer to her as “the queen of 9 North.”

“We knew we were we in the right place for Lucy’s care, Johns Hopkins Children’s Center has brought in the world’s best doctors,” Jon says. “Everything that has happened previously has led up to the moment where our daughter had kidney failure and needed a very specific type of care, and Johns Hopkins Children’s Center was able to provide it. That’s been the miracle in this situation.”