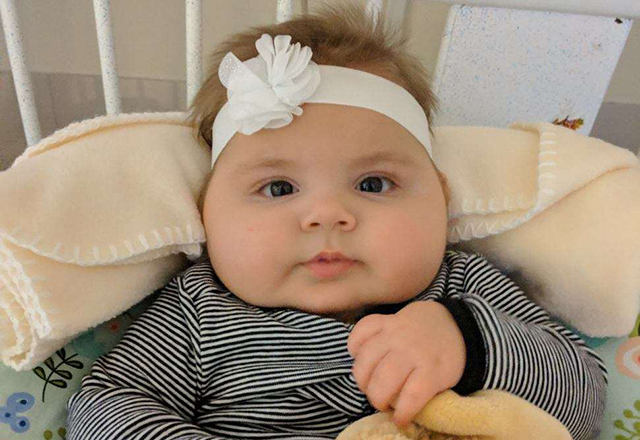 When Jenn and Rob learned they were expecting their first child, a baby girl, they were thrilled. As a Baltimore native, Jenn planned to deliver at The Johns Hopkins Hospital. During delivery, doctors became concerned when baby Kinsley’s heart rate dropped rapidly: The umbilical cord was wrapped around her neck. She was barely breathing and had only a slight pulse. Thankfully, the care team was able to resuscitate Kinsley, and they immediately took her to the neonatal intensive care unit (NICU) at Johns Hopkins Children’s Center.

“Neither of us had gotten to hold her, and I still hadn’t seen her,” Jenn says. “From there, it was a roller coaster.”

Because the umbilical cord had cut off the oxygen supply to Kinsley’s brain during delivery, her care team began cooling therapy, also known as therapeutic hypothermia, to try to prevent permanent brain damage. Kinsley was placed in a warmer, and cool water was pumped into a cooling blanket that kept her body temperature at 92.3 degrees Fahrenheit. The lower temperature can lessen inflammation in the brain and interrupt the metabolic processes that cause neurons in the brain to die — hopefully lessening her chance of brain injury. However, when the NICU team tried to insert an intravenous (IV) line or prick her heel for testing, Kinsley began spitting up blood and bleeding profusely — sometimes a side effect of the cooling therapy.

“When I got to the NICU, I saw a team of doctors working on Kinsley, and I could see the worry on their faces,” Rob recalls. “One of them pulled me aside and said they were doing everything they could for Kinsley, but she was dying.”

Reverend Kat Kowalski, affectionately known in the NICU as Chaplain Kat, offered her support to Jenn and Rob, praying with them and even baptizing Kinsley in her room. Hours later, Kinsley’s bleeding was finally under control. The next day, Kinsley’s belly appeared to be growing.

Scans and tests were inconclusive, so doctors performed an exploratory surgery to determine the cause of Kinsley’s swelling belly. Her team discovered that Kinsley’s stomach had ruptured. She only had 10% of her stomach left, and it was not connected to her esophagus to allow for proper digestion. Because of her ruptured stomach and continuing blood loss, Kinsley received 78 blood transfusions during the first two weeks of her life, and she underwent nine surgeries during her first four months of life.

In January 2019, Daniel Rhee, M.D., M.P.H., pediatric surgeon at the Children’s Center, had an idea — a procedure that had never been done before. Kinsley underwent a monumental, lifesaving procedure during which Rhee created a stomachlike reservoir in Kinsley’s abdomen out of her intestines and connected it to her esophagus to enable Kinsley to digest milk and formula properly. The surgery was a success, and soon Kinsley no longer needed to be fed through an IV. Less than two months later, Jenn and Rob finally brought their baby girl home after spending 173 days in the hospital.

Today, because of everything she endured at such a young age, Kinsley has chronic kidney disease and will likely need a kidney transplant in the next few years. Still, her mom, Jenn, says Kinsley is meeting all of her developmental goals, is able to eat normally, and is “an average 2½-year-old.” Jenn says Kinsley “eats like a horse,” and her parents have affectionately nicknamed her “Godzilla” because she climbs on everything.

"She’s a miracle, and Johns Hopkins Children’s Center gave us the gift of being able to watch Kinsley grow up," Jenn says. “They are the reason that we became a family of three.”